You can measure the success of an event by listening and paying attention to what’s being said about it. From what we overheard last weekend, ACE Comic Con Midwest was truly the place to be.

It may be relatively new, but when it comes to getting the opportunity to meet some of the biggest stars in the world today or, at the very least, seeing them all under one roof, there’s no better place to be than an ACE Comic Con.

And most recently? That place to be was ACE Comic Con Midwest 2019 in Rosemont, Illinois (just outside of the beautiful city of Chicago).

Now, we have no doubt that you’ve probably seen them already. The articles that have come out about ACE Comic Con Midwest. You know, the ones talking about how amazing Brie Larson’s reaction to a photo op proposal was, or the ones that mention how Chris Hemsworth thinks it would be hilarious to do a Three Amigos remake with Chris Evans and Robert Downey Jr.

Oh, or the ones that mention how Jake Gyllenhaal would love to lip sync battle with Tom Holland, or how Tessa Thompson wants to do a MCU-sical with all of the Marvel ladies.

But while these were all most definitely moments to remember, it’s what was said during those moments that really made them wonderful and powerful to begin with.

And so, here are the best quotes to come out of ACE Comic Con Midwest 2019. (Spoiler alert: There are a *lot* of Tessa Thompson quotes. Sorry not sorry.)

‘If you are coming out, if you have, I see you. If you have reasons why you’re not ready, I see you, too. You are loved, you are supported.’ 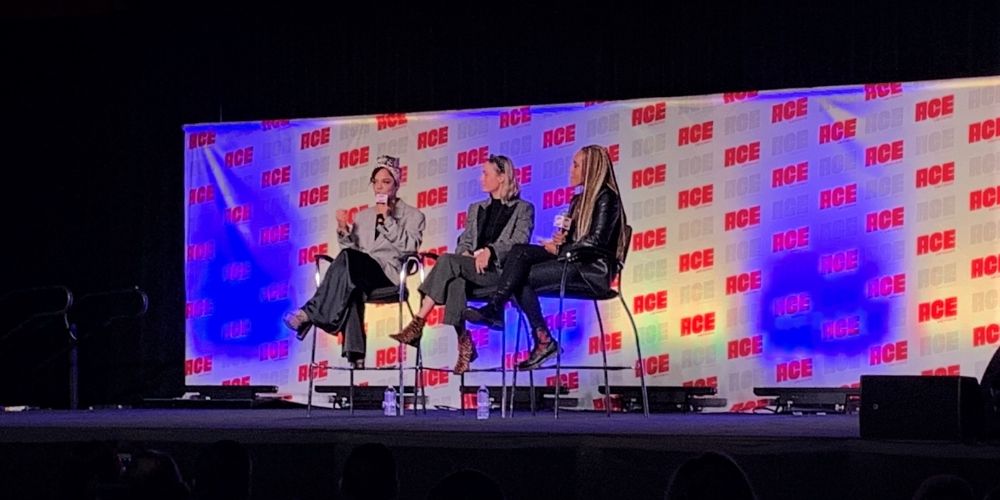 Tessa Thompson is a huge role model for so many people today, and a large reason for that is because of how much love she puts into the world.

During her panel with Brie Larson, Tessa Thompson took some time to explain how, while she dresses up and gets to be a queer superhero of color, her true heroes are those who face the world every day with a brave face and know who they are.

Her discussion of just how much fans’ stories of coming out (or not), including those who were going to use their photo ops with her and a pride flag to come out to those close to them, have truly moved her. And so, she took some time to not only acknowledge and validate everyone in the room, but also declared her hopes for a future where representation is no longer applauded or congratulated, but treated as normal and something that exists without question.

‘Something about me obviously just says, ‘Dunk me under water.” 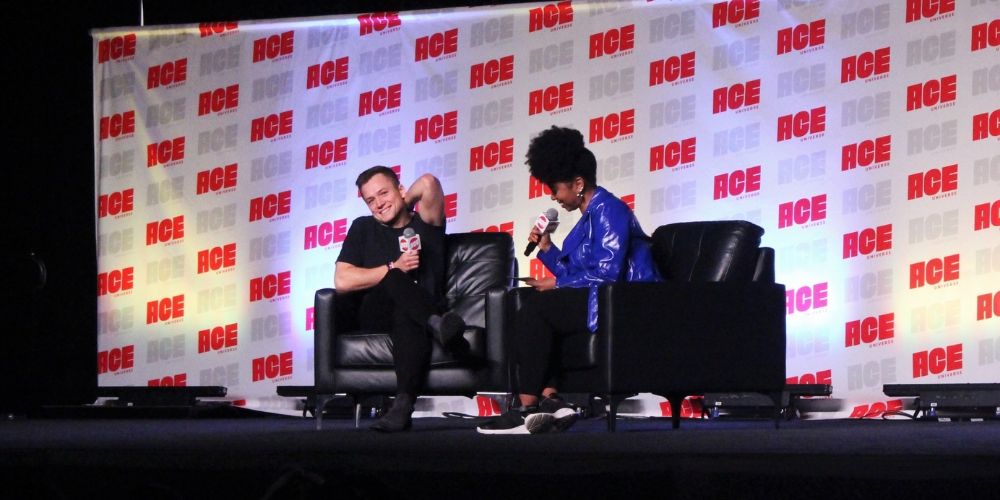 Believe me when I say that Taron Egerton has the best reactions to, and comebacks for, everything. His panel at ACE Midwest was incredibly entertaining because he was just so on the ball. He rolled with the host when she opened the panel by flirtaciously mentioning how thick thighs save lives, he expertly avoided spoilers, and just had the best witty things to say in response to any question: typical or incredibly odd.

I will also say that while they did not say anything verbally, Taron Egerton’s biceps were working overtime and speaking volumes throughout the course of the panel. Take that however you will.

‘I remember Mark Ruffalo looking at me going, ‘Are we wrecking this movie? Are we destroying these characters?” 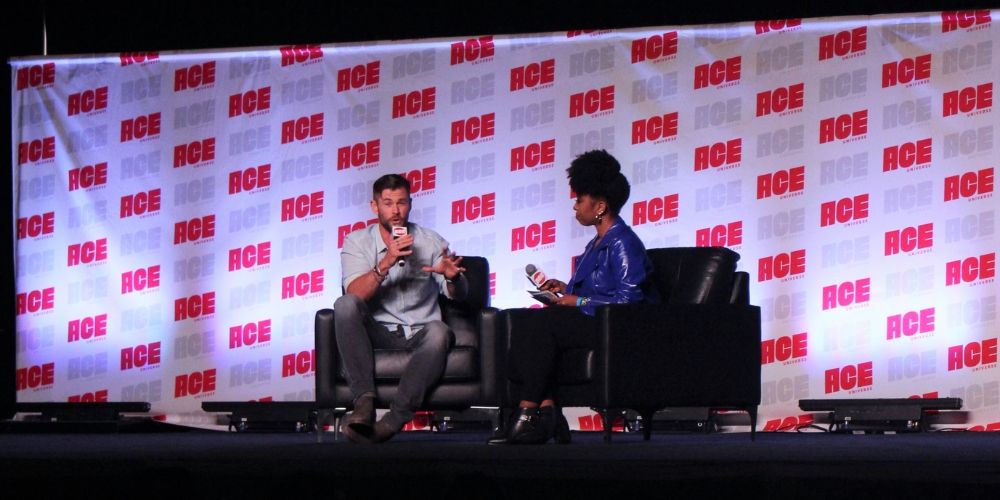 I, for one, had never heard Chris Hemsworth’s impression of Mark Ruffalo before. That is, until ACE Comic Con Midwest. Now I wish I had had it in my life sooner.

During his panel, Chris Hemsworth chatted with the moderator about all of the different iterations of the Thor character and how much it has changed over time with different directors. He then proceeded to talk about how he didn’t think the whole story about snakes and Loki would make it into the movie, and about how Mark Ruffalo was a bit concerned about the film because it was such a departure from what had come before.

I swear to you, if you had overheard Chris Hemsworth’s imitation without knowing it was him, you would’ve thought it was Mark Ruffalo. He had the voice down and even nailed some of the gestures and mannerisms. Hearing Bruce Banner’s voice coming out of Thor Odinson’s body (pre-Endgame) made me yearn for some sort of body-swap MCU story in the future. 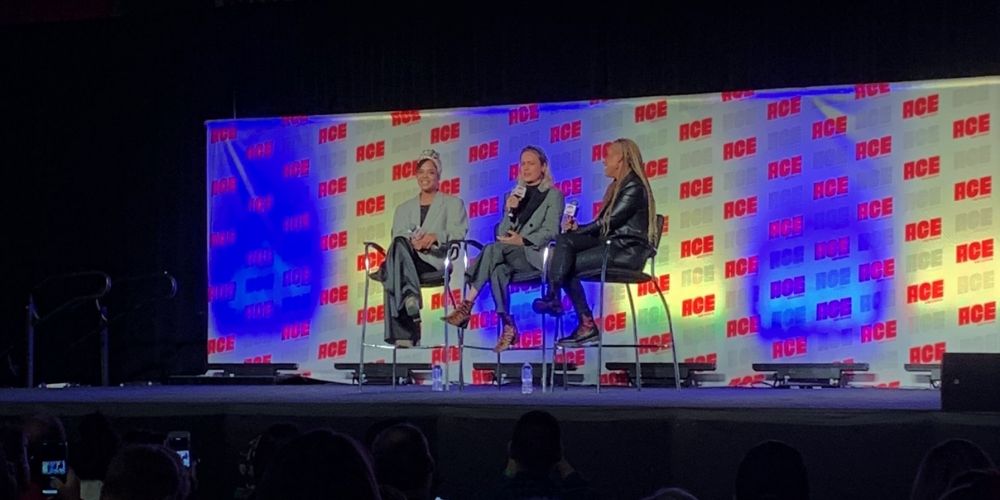 Immediately, straight out the gate, Brie Larson was all about girl power, sex positivity, and LGBT visibility and representation within the Marvel Universe. She had the above to say in response to audience members cheering about her and Tessa Thompson’s introductions.

Brie Larson was amazing to watch on stage because you know that she just gets it. She knows what people want to see and have been dying to see on screen. Not only that, but she values and champions representation as well as just normal people feeling comfortable in their own identities, world be damned.

“We’re here to ship, y’all” was one of the first things she said on that stage in Chicago, and it really set the tone for how the rest of the panel was going to go.

‘It hurt my heart a little bit that I’d have to do some bad things to this dude. But then I didn’t care.’ 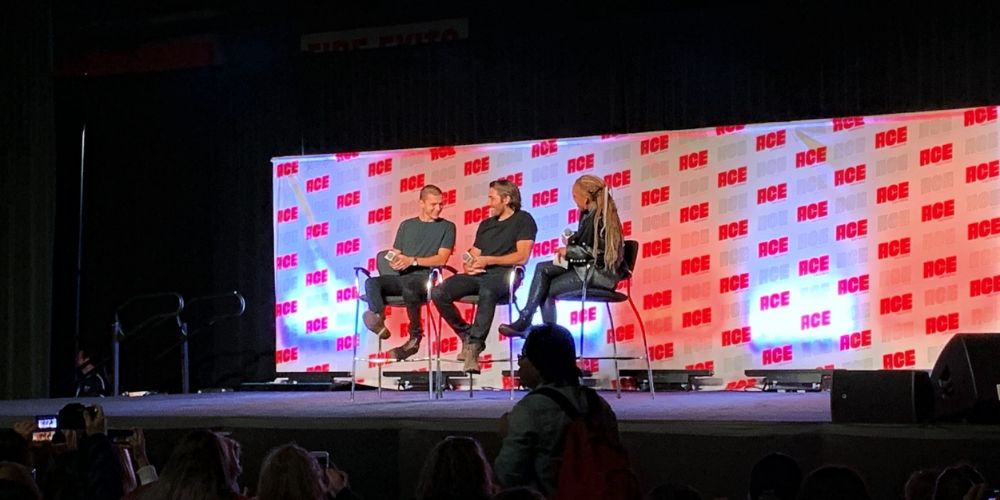 Experiencing Tom Holland and Jake Gyllenhaal’s bromance in person is everything you could’ve ever hoped for and so much more. They played off each other just as well in person as they did in Spider-Man: Far From Home and had just as much chemistry (if not more).

Listening to them talk about their experiences during Far From Home, both in front of the camera and just out in the world, was a riot. And the way that Jake Gyllenhaal kept poking at Tom Holland during the panel (like with this quote about what it was like to play Mysterio) kept everyone laughing the whole time. I wouldn’t say that Tom Holland is the straight man to Jake Gyllenhaal’s goofyness, but that’s how they played it at ACE Comic Con Midwest 2019.

If you haven’t watched it yet, you should really check out their panel.

‘How do I top lesbians?’ ‘I’m sure the lesbians could show you after this panel.’ 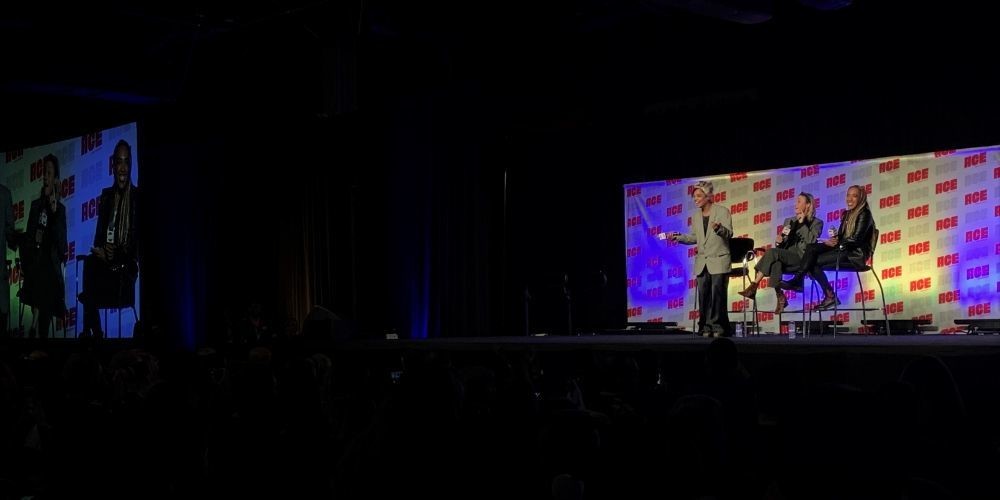 This was basically the quote that broke the internet on Saturday. And for good reason.

In the room, as soon as Brie Larson uttered the words, “How do I top lesbians?” after the moderator asked if she had anything else she wanted to add before the panel wrapped up, it felt like time slowed down. It was almost like we all knew how Tessa Thompson was going to respond.

In fact, I feel like I had the same reaction that Tessa Thompson did, but felt anticipatory grief in the split second before her witty retort because I didn’t think she’d say what I’d hoped she’d say.

The world will be forever indebted to these two fantastic women for such a hilarious and unforgettable exchange.

‘This is the best experience.’ 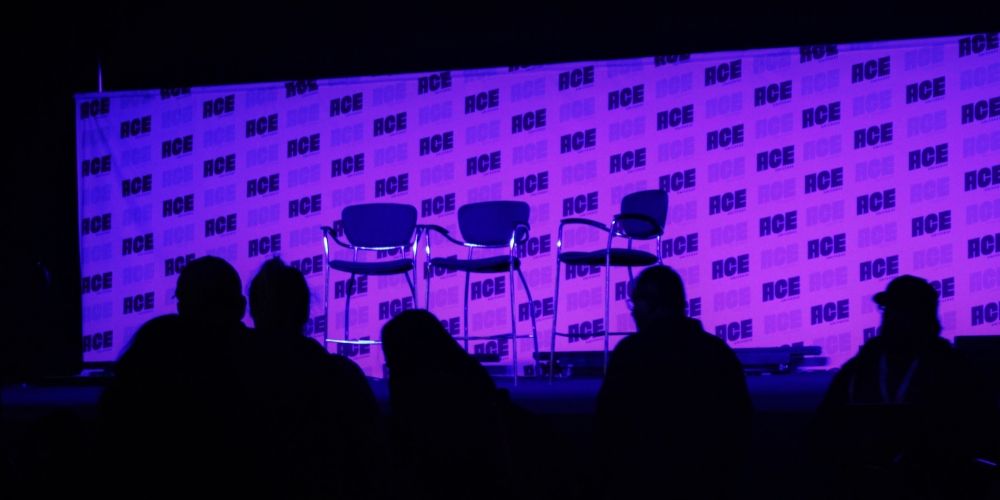 This is quite possibly the best thing I heard all weekend and it didn’t come from a celebrity guest.

Minutes after taking the ACE Comic Con Midwest floor on Saturday morning, I crossed paths with a mother accompanying a boy in a wheelchair. As they passed me, I heard him excitedly tell his mom, “This is the best experience.” Mind you, the floor had just opened maybe an hour previously and Fridays weren’t generally the most exciting days at conventions.

This boy must’ve had something wonderful or magical happen to him in a very short span of time that morning at ACE that he was confident enough to make his declaration.

As an event organizer or even an attendee, you honestly can’t hope for much more than that. It was perfect.


Related: ACE Comic Con: 7 aspects that set it apart from other conventions