As his new movie The Irishman ushers Martin Scorsese’s career into its sixth decade, we decided to take a look back at his startling and innovative career as a filmmaker.

Boxcar Bertha was Scorsese’s first professional film, a Roger Corman cash grab trying to capitalize on the success of movies like Bonnie and Clyde. It helped him make a name for himself, but it does not feel like a true Scorsese film. John Cassavetes, the filmmaker and actor who served as a mentor for young Scorsese said, upon seeing the film, “you just spent a year of your life making a piece of shit,” which led Scorsese to reappraise his dreams and led him to rewrite the script that wojuld become his next film, Mean Streets.

Paul Newman won his only Oscar for this sequel to The Hustler. The script is rote, but Scorsese and editor, and longtime collaborator, Thelma Schoonmaker’s brilliant editing highlights an inherent violence to the game of pool that had never been explored before.

It’s messy, big, and loud. Some of it is enthralling, but the fact that it is the director’s most compromised work makes it impossible to fully embrace. Gangs of New York remains notable as Scorsese’s first film with Leonardo DiCaprio and some exciting action scenes, but the majority of the film is forgettable. 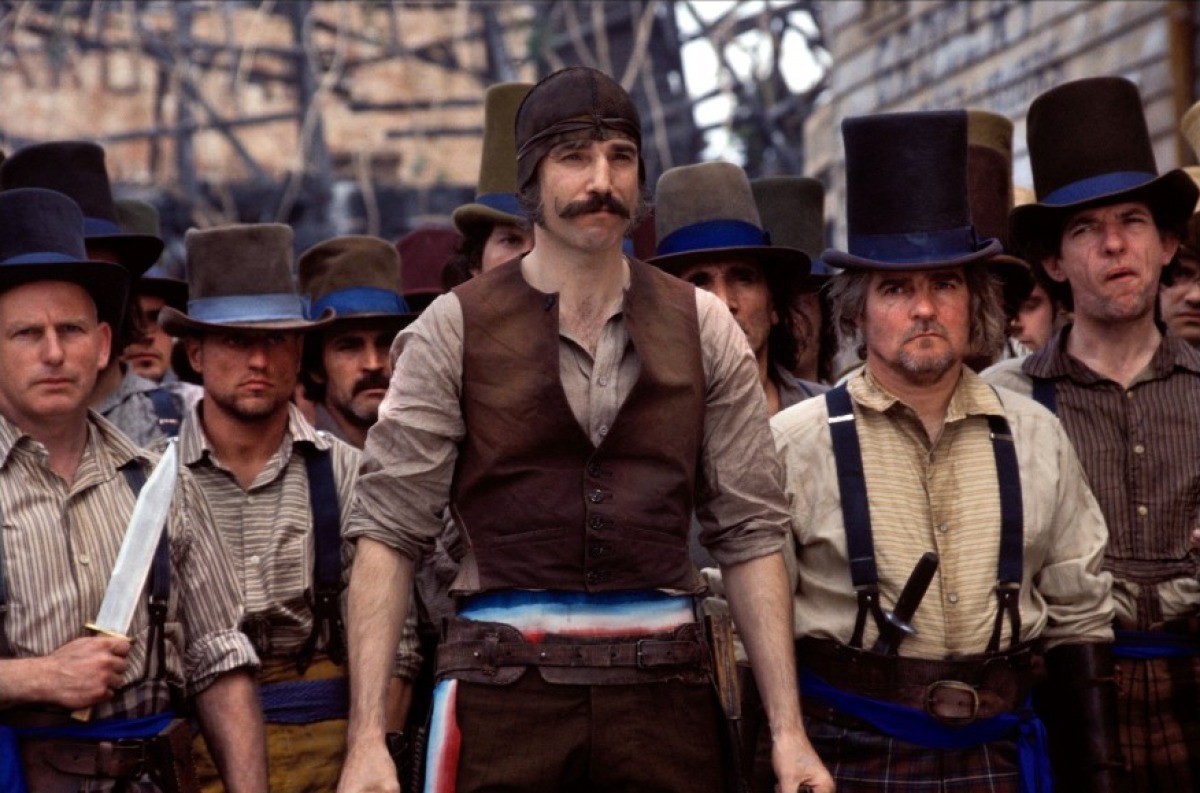 Beloved in certain corners of the cinephile world, Shutter Island never grabbed me the way his other paranoiac thrillers do, despite a great leading performance by DiCaprio and some interesting commentary on American life in the postwar era.

All of Scorsese’s films are love letters to the cinema in one way or another, but Hugo makes it the explicit narrative of the film. It has some moving sequences but the dialogue and performances take too much of a backseat to the 3D technology (which is exquisitely done, but doesn’t make for a satisfying story film).

Few directors have burst onto the scene such force as Scorsese with his debut. The movie that played at the New York Film Festival and received a rave by a young film critic named Roger Ebert—Scorsese and Ebert each credited the other for breaking their careers open. Even if it pales in comparison to the work he would do over the next several decades, it is easy to see how such a stylish, energetic, and personal film became a critical sensation.

Bringing Out the Dead is one of the least commercial titles in the Scorsese canon, starring Nicholas Cage as an overnight paramedic dealing with the insanity and intensity of 1990s New York nightlife from the standpoint of a medical professional. Some brilliant depictions of insomnia as Nicolas Cage plays Frank Pierce experiencing his long night of the soul.

Alice Doesn’t Live Here Anymore is a beautiful film, for which Ellen Burstyn won a well-deserved Academy Award as a single mom looking for romance. While the film ostensibly revolves around Alice’s forays into dating, the heart of the film is the lovely friendship between Alice and her coworker Flo (Diane Ladd), a deeply felt depiction of two women supporting each other unconditionally. 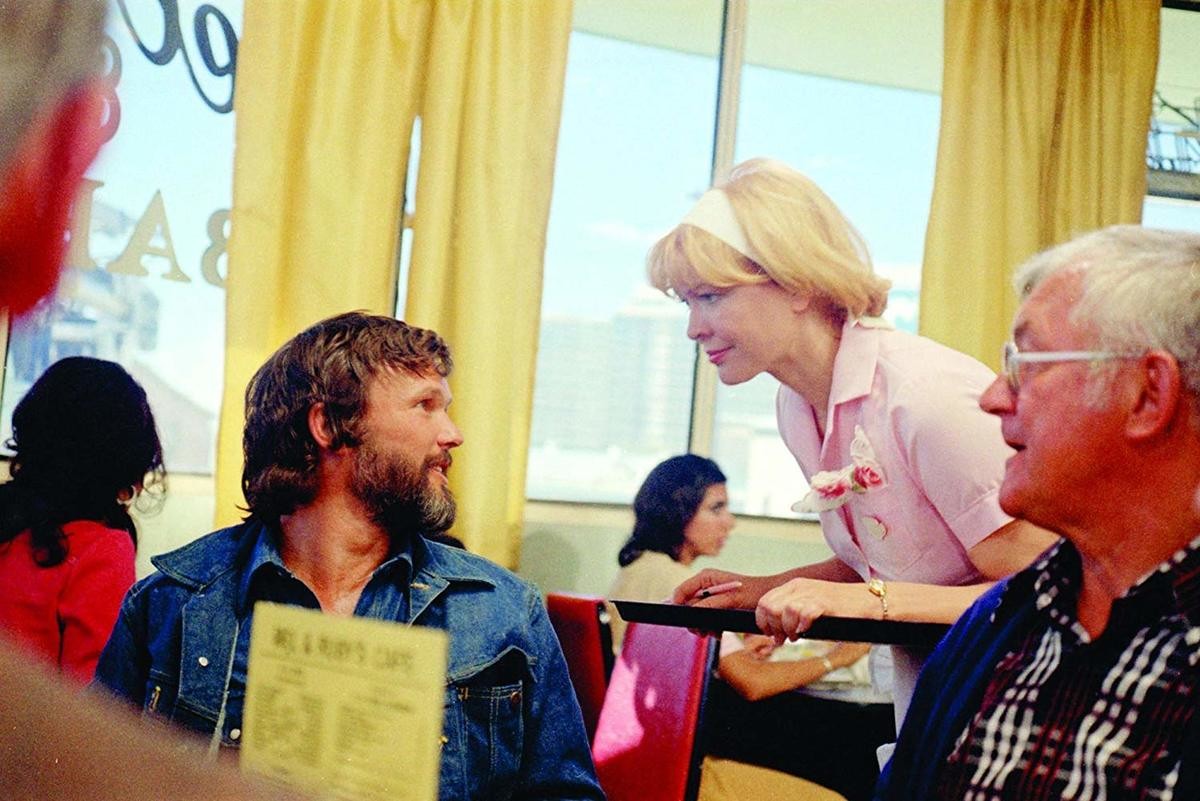 Scorsese’s remake of this classic takes the original story of a family being terrorized by the father’s old client, who went to prison because of a mistake he made, and turns it into a nightmare about the American Dream. De Niro’s Max Cady tears the family apart from the inside-out, turning them against each other in a way the original does not.

Without Mean Streets, there would be no MTV. Scorsese’s first film to cut scenes to pop songs, like “Be My Baby” and “Jumpin’ Jack Flash” to introduce its key characters, ushers in an era of flamboyance never before seen in American film. Plus, after The Godfather, Scorsese took the opera out of the mafia and put it back in the streets with a grit and realism never before seen in the genre.

Scorsese’s Howard Hughes biopic beautifully evokes the Hollywood of the 1930s and 40s all while watching its subject, stunningly played by DiCaprio, devolve into madness. The film features some of the biggest set pieces in Scorsese’s career yet does not skimp on the character study of Hughes as a man whose peculiarities and insecurities overtake him.

Scorsese’s chapter of New York Stories, “Life Lessons,” is a perfect 40-minute film about a painter misguidedly in love with his protégée, a simple and effective tale about toxic masculinity and entitlement.

Scorsese’s film about the Dalai Lama fleeing Tibet after the invasion by communist China led to Scorsese being banned from ever entering China again. The film was met with a shrug when it premiered, but it is a hypnotic, unconventional biopic of a powerful religious leader.

Another religious epic, Silence is the film of two Jesuit priests in a hostile feudal Japan looking for an old mentor. The plot is reminiscent, in the broadest sense, of John Ford’s The Searchers, Scorsese’s favorite film and the one he has been chasing his entire career: men on a quest to find someone who may not wish to be found, questioning the utility of pursuing any goal, especially one that comes from a place of masculine identity.

11. ‘The Last Temptation of Christ’

Scorsese’s film depicting the life of Jesus Christ (Willem Dafoe) was one of the most controversial films of its time for turning him into a human being with doubts and fears like anyone else. But by the end of the film and its transcendent final shot, the audience should make no mistake — he is definitively portrayed as the Messiah. Even for those not of the faith, the film is a powerful tale of a person who fears and rejects who they are destined to become before finally succumbing to their fate.

Casino is one of the most savage depictions of America that has ever been produced, featuring a cast of characters with nothing on their mind except accruing wealth by any means necessary. The last 40 minutes depict the falls of its characters — including Ginger, played by a dazzling Sharon Stone — is gutting, pathetic, and depressing, rebuking all of the glamour that came before it; making it Scorsese’s definitive film on the genre (at least, that is, it was until 2019). 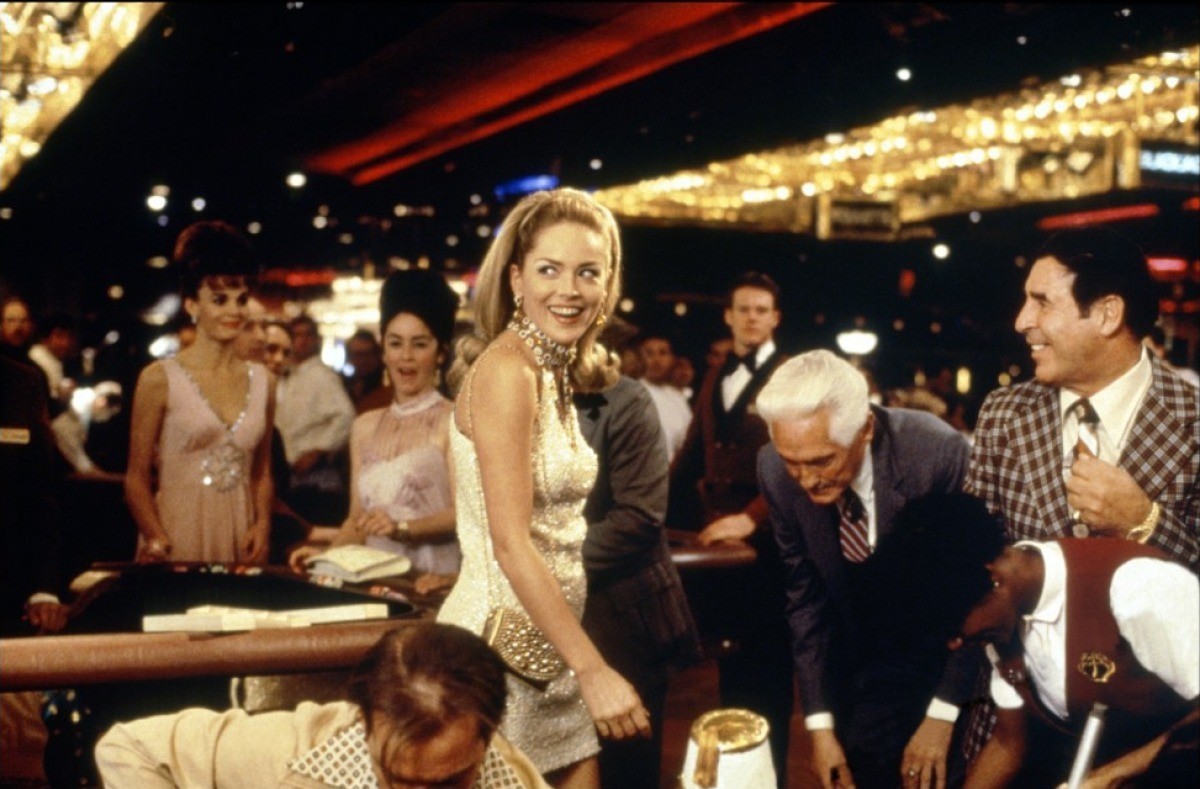 If Casino is the Scorsese film that most evoked a cocaine-fueled America, New York, New York is the most authentically cocaine-fueled film. The improvisation seen in all of his films is at its most unhinged and freewheeling, with scenes taking upwards of 20 minutes. The length confounded critics at the time but today the film feels like a fresh and energetic reworking of Hollywood’s A Star Is Born myth, done with pure Scorsese panache.

As someone who was a fan of Scorsese’s work but was too young to have experienced his heyday, The Wolf of Wall Street was the film I had been waiting for. It is a movie that seduces you in before chewing you up, spitting you out, and leaving you for dead — much like Jordan Belfort (DiCaprio in his career-best performance) does to everyone around him in the film. The film presents Wall Street as glamorous but grotesque, and it doesn’t spoon-feed you the differences between “right” and “wrong.” Scorsese masterfully depicts the entire picture and lets you decide for yourself.

Griffin Dunne plays Paul Hackett over the course of a single night in this film, and what starts as an absurdist comedy, soon descends into hell as paranoia and panic turn Paul’s dream of going out with Marcy (Rosanna Arquette) into a nightmare.

Scorsese’s latest movie is a staggering epic about the life of Frank Sheeran (played with profound sadness by De Niro), a member of the Bufalino crime, detailing his relationships with Russell Bufalino (Joe Pesci) and Jimmy Hoffa (Al Pacino).

The film is a meditation on time, a denunciation of capitalism, and an interrogation of the mere concept of “the self.” The Irishman shows the devastating impact that comes with pursuing a life in America, daring to ask if anything matters at all.

The basis for Todd Phillips’ Joker is a deep and dark look into the life of Rupert Pupkin (De Niro) as he attempts to pursue a career as a comedian. It’s clear to the audience that he is unstable and never going to be successful, but Rupert has no idea. We are asked both to laugh at Rupert while also feeling empathy for him, a balancing act that no filmmaker has ever excelled at like Scorsese. 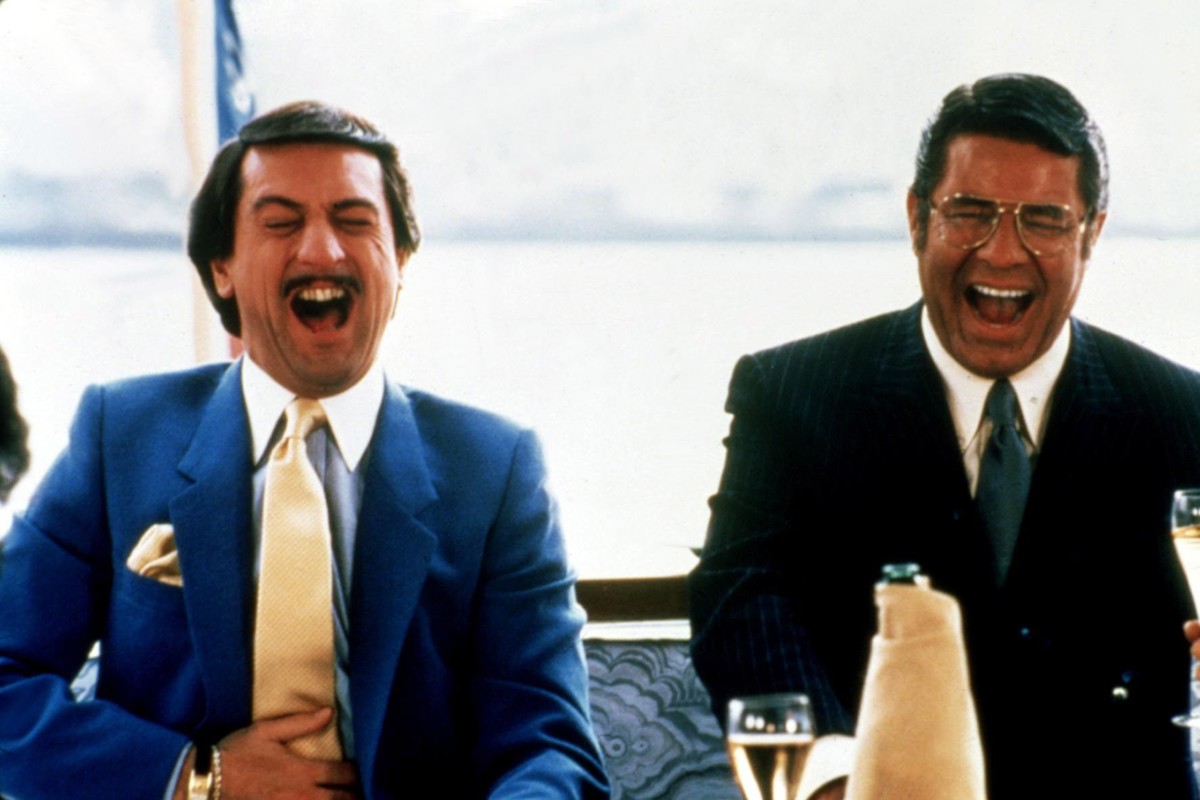 The story of Travis Bickle as the aggrieved Vietnam War veteran turned vigilante portrays one of the most complex character studies ever seen in American film. Scorsese’s camera is as dynamic as ever, floating through scenes like the ghost of someone Travis used to be bearing witness to who he has become.

Scorsese’s adaptation of Edith Wharton’s turn of the 20th century novel of repressed passion in high society New York, turns stolen glances into violence inflicted by and on its characters. Michelle Pfeiffer and Daniel Day-Lewis each give one of their best performances as the star-crossed lovers, making the audience feel every bit of aching and longing felt by their characters.

GoodFellas plays out like a two and a half hour trailer for the life of a gangster, stopping on all the hits along the way from rise to fall, but only briefly before moving on to the next. It’s a whirlwind depiction of sociopathy and brutality in its brilliant performances by Ray Liotta and Joe Pesci, and it redefined the gangster genre for the second time in Scorsese’s career.

There is no other movie like Raging Bull. It is ethereal yet earthy, stylized yet naturalistic, hard yet tender. The reunion of Schoonmaker and Scorsese after more than a decade (she edited Who’s That Knocking at My Door? but couldn’t get into the union so Scorsese couldn’t hire her during his professional rise) provided a new clarity into Scorsese’s work and began in earnest the greatest cinematic collaboration in history. The story of Jake La Motta (played by De Niro), apocryphally the first boxing movie to ever take the camera into the ring, is a stark condemnation of masculinity and capitalism, as are many of Scorsese’s movies, but none before or since hit with the pathos and generosity of Raging Bull. 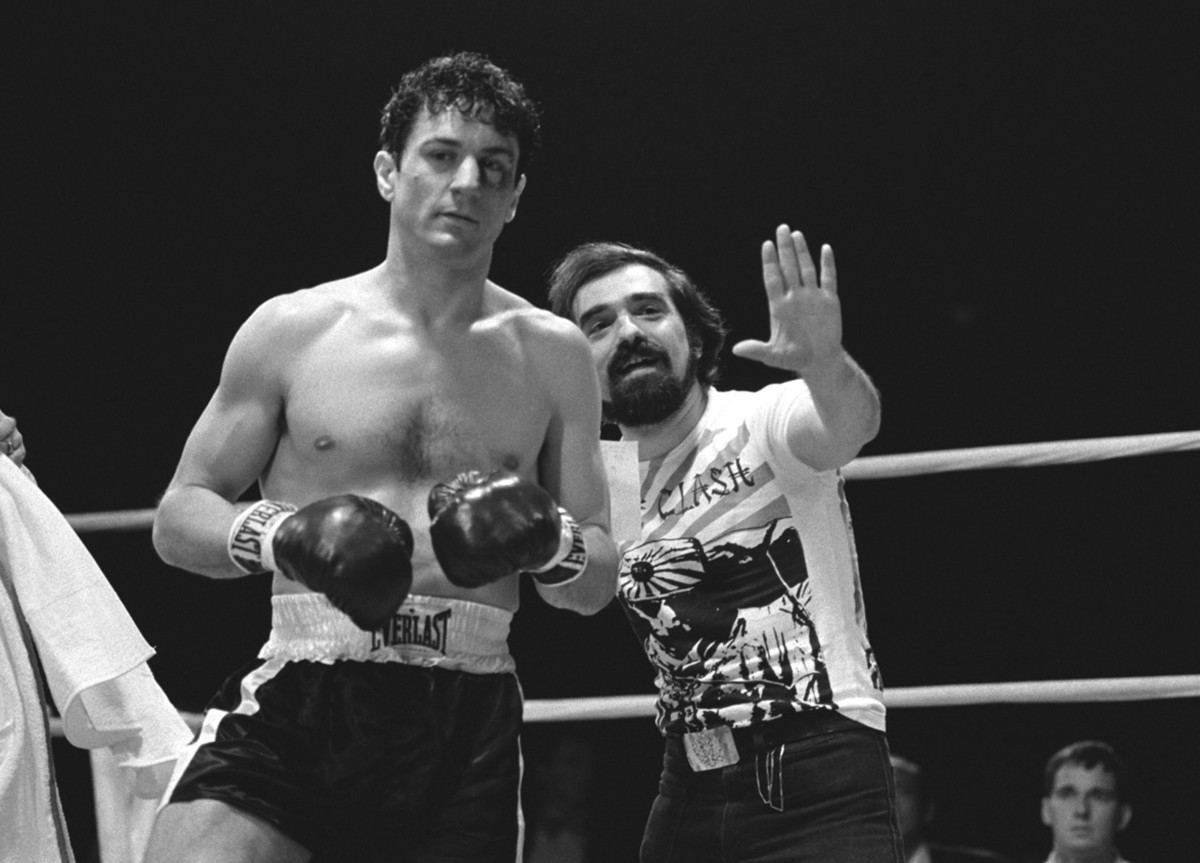