Home for the Holidays, the 1995 film directed by two-time Academy Award winning actress Jodie Foster, is a melancholic human comedy about going home for Thanksgiving, and it is the most authentic and frankly best Thanksgiving movie there is.

The movie starts as we meet Claudia (played by Holly Hunter, hot off her own Oscar win) having the worst day of her life, the day before the holiday in question. She works as an art restorer at a museum in Chicago, but her boss calls her into his office and fires her due to budget cuts — and when they hug goodbye, she kisses him hard on the mouth.

On the plane back to her suburban New England hometown, she calls her brother, Tommy (sidebar: airplanes had built-in phones in the ’90s for passenger use? Do any airlines still do this?) and leaves him an emotional voicemail detailing the nightmare of her day — she has developed a cold now, too — and says she wishes he was also coming home for Thanksgiving.

Claudia is picked up by her parents Adele and Henry (a terrifically cast Anne Bancroft and Charles Durning) and they immediately fall into a familiar rhythm of overbearing mom and jokey dad annoying their daughter. They get home and chat. Adele mentions how great Claudia’s paintings are. Claudia reminds her mother she works in a museum now; she doesn’t paint anymore.

Claudia doesn’t say this with any hint of remorse or longing. It is simply the fact of the matter: Claudia used to paint her own work and now she restores great works. She is in her mid-to-late 30s and she has found peace in her station and is not striving for anything but a steady job. But her mom will still boast about her talent and potential and push her, haranguingly.

This is one of the main themes of Home for the Holidays: We regress to younger versions of ourselves and the dynamics we once shared when we go home. Adele will continue to praise Claudia’s painting skills and Claudia will continue to be the annoyed, resentful daughter. 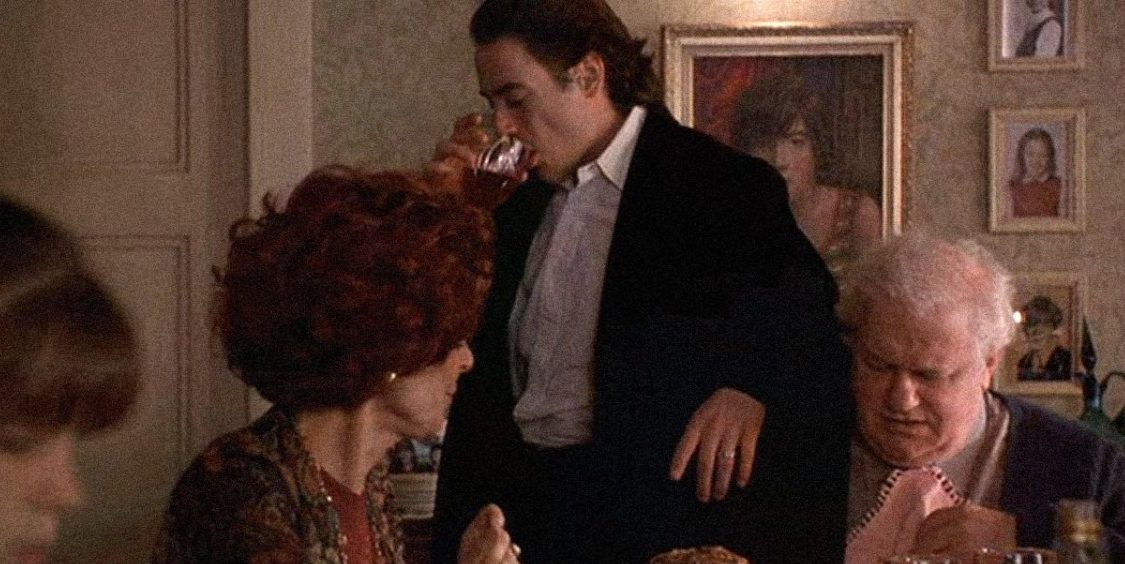 Soon after, Tommy (Robert Downey, Jr.) returns home with a coworker, Leo (Dylan McDermott), in tow. He lets Claudia know he’s home by taking polaroids of her sleeping, and then later in the shower. Both times Claudia screams and chases after Tommy, yelling at him. The petty dramas of having siblings are reignited as they return to their family home. Claudia thinks Leo is Tommy’s new boyfriend, and she is upset he would break up with his partner, Jack. But she is mistaken.

Related: Everything I know about Thanksgiving I learned from American TV

The film solidifies its place as the best Thanksgiving movie at the holiday dinner when the third and final sibling, Joanne (Cynthia Stevenson) arrives home with her husband (Steve Guttenberg) and children. Joanne is local and doesn’t have to stay with her parents over the holiday like her siblings. As the day gets underway, it’s clear that Joanne is very different from Claudia and Tommy; she is very religious and very uptight. She intimates resentment of Claudia’s escape from their hometown and of Tommy’s sexual orientation.

When Tommy accidentally shoots the turkey across the table at Joanne in a slip of the hand while carving, Joanne blows up, calling Tommy a “cocksucker!” and “Mr. Pervert,” and reveals that she heard through the grapevine that Tommy had a wedding with his Jack — and that she is disgusted by the fact (“Did you wear a dress??” she derides).

Claudia tries to defend Tommy and diffuse the situation, but Joanne turns on her as well. Eventually, everyone retires to their separate corners. Claudia and Tommy eat their dinners in the kitchen instead of the dining room with the family.

All of the tensions in the family go unresolved. There is a pivotal scene, when Claudia goes over to Joanne’s house later that night to make amends for the fight. Joanne is in no mood for forgiveness, and they continue to air their grievances, albeit in a calmer tone. Joanne worries about their parents and resents that she is the one who stayed to help them. Claudia says she doesn’t have to; no one asked her to.

The thing is, they’re both right. Joanne makes assumptions about Claudia and she responds, “You don’t know anything about me.” In this moment, you can see them both realize that maybe they will never truly know each other, now 15-20 years outside of living together. They’ll never be close sisters again, if they ever were. 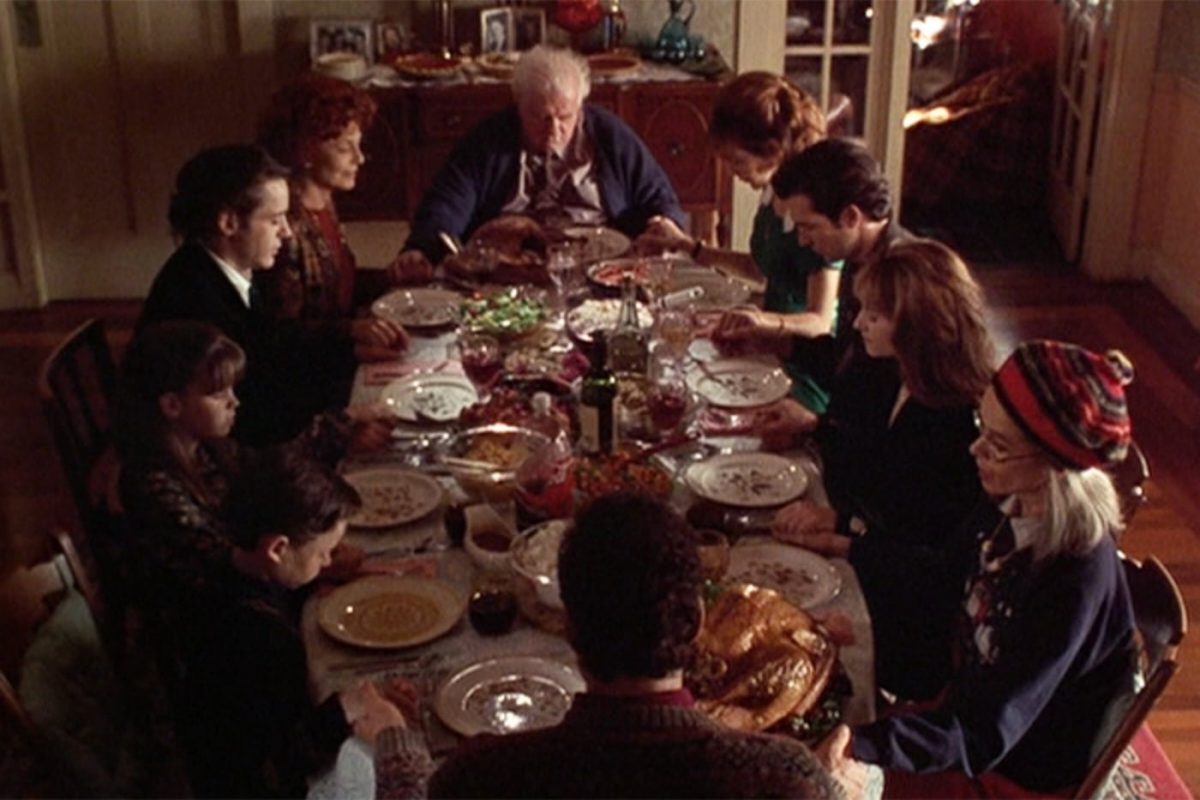 Meanwhile, Adele and Henry are hurt that Tommy didn’t invite them to the wedding. When Jack calls from back in the city to wish Tommy a happy holiday, Henry wishes him a sincere congratulations and tells him that he’s a good kid. They never explicitly make up with Tommy, but their support of him is present.

It’s the best Thanksgiving movie because it’s such an honest film about the way families grow up and grow apart from the people they should be closest to. They are all still incredibly close in a way, almost on a cellular level, but they have all evolved beyond their ability to connect with each other.

Claudia’s daughter, Kitt (Claire Danes), stays in Chicago over the holiday, and as Claudia is leaving, Kitt informs her that she will be having sex with her boyfriend. Claudia is visibly displeased, but she doesn’t yell or discipline; she knows that this decision is Kitt’s to make. Claudia was raised in a strict Catholic household, so one assumes an abstinence-only education led to Kitt in the first place.

Claudia’s relationship to her own daughter stands in stark contrast with the other familial relationships. It is open, honest, free of judgment, and free from secrets. The final point the film makes is that we all grow up and make our own families, and that is great, but you never truly leave behind the family you were born with. And that can often lead to great pains.

The film ends with a brief montage of home movies — of the leads growing up interspersed with them in the present — having a happy time with their chosen families. They will probably never experience that kind of pure joy with their siblings again. Too much has happened to them and too much has changed between them, yet they will always be bound forever.

For all of the pain and all of the humor, Home for the Holidays is the best Thanksgiving movie there is.

‘Home for the Holidays’ is available to stream on Amazon Prime