Cats leaves everything it has on the table and begs you to please send it away to the Heaviside Layer to live a better life.

Unfortunately, it appears that post production and direction leaves us with a gift that is exactly what you would expect from an actual cat.

Before we dive into this dead-mouse of a film, there is one thing that most people need to understand —- what is actually happening?

What is ‘Cats’ about? 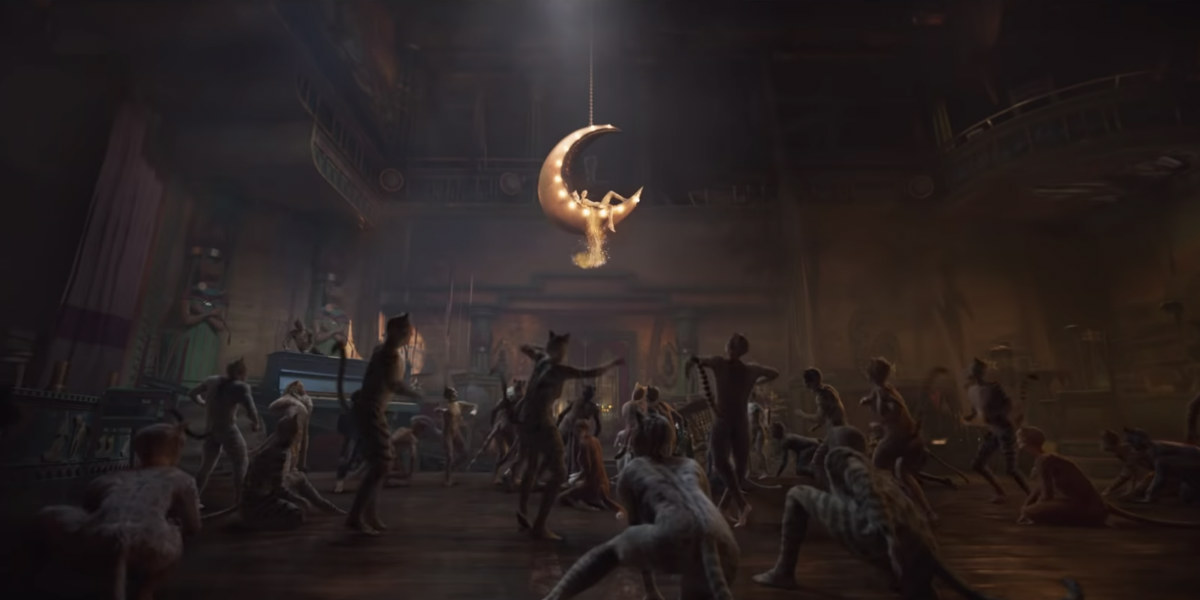 My favorite moment of this entire experience was when the credits began to role and the woman next me turned to her friend and said, “Wait, that’s the plot of Cats?” To be fair, I think the general knowledge of the musical begins and ends with a faint recollection of the costumes and a few notes of “Memory.” The plot of Cats is simple, but wild.

It’s a movie about cats, how to address them, the importance and intimacy of their names, and what it means to earn even the faintest bit of their attention. And, as Judy Dench will have you know, the distinction that they are not dogs.

The final moments of the musical, “The Ad-Dressing of Cats,” spells it all out for you and if you choose to see this film, be prepared for Judy Dench to break the fourth wall and speak directly to your soul. 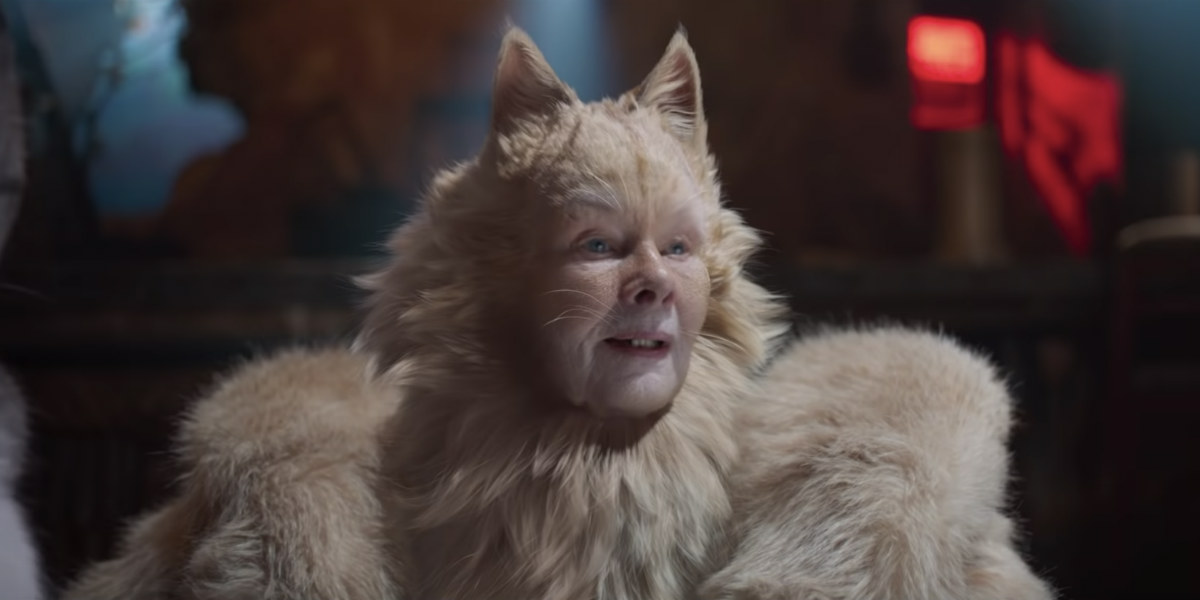 The musical is based on the T.S. Eliot poetry collection “Old Possum’s Books of Practical Cats.” There are many different types of cats, you see, and each of them behaves in a unique way. What is in their nature cannot be denied, and through song, they will tell you why!

After meeting a select few on the night of the Jellicle Ball, Old Deuteronomy (Dench) arrives, a cat who is believed to have lived nearly 99 lives, and will choose the cat who will move on to a new life that awaits them in the Heaviside Layer.

It’s a showcase of cat talents, and one performer who bears its soul best, will be sent on from this life. Dark, right?

Trickery won’t work, flash and talent doesn’t quite hold substance. But the Jellicle cats don’t seem to grasp this, leading to some acting, tap dancing, and magical showcases of skills. And if we were choosing cats in this age of viral creations, the TikTok “Mr. Sandman” cat would push Jennifer Hudson right out of that balloon. Roll credits.

Here instead, Cats treats us to two hours of humans crawling on all fours, licking and scratching themselves (and others), and most disturbing, yet oddly seductive, a look at a naked (?) Idris Elba. 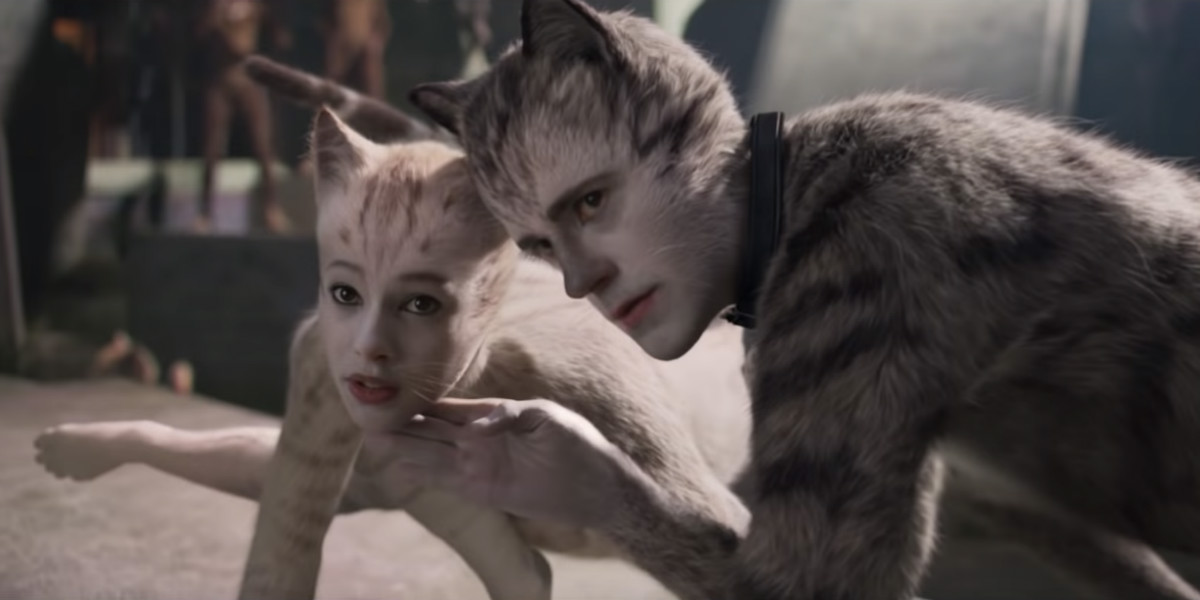 Cats suffers from two major flaws. First, it has no concept of tone. Second, the VFX are distracting, ill-conceived, and not a single person on the design team asked whether they should be doing this. 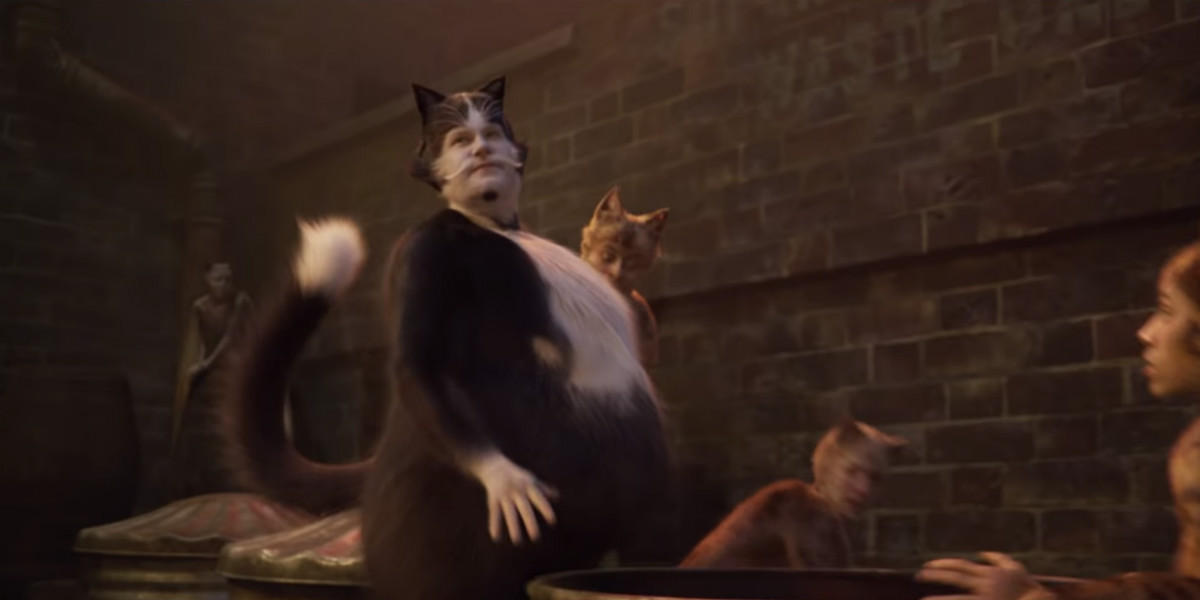 Their star power distracts from their “catroductions,” especially as you watch Wilson in what can only be described as a cringe-worthy performance. And after years of Crosswalk Musicals, Cordon’s performance as Bustopher Jones feels more like an extended Late Late Show skit than a blockbuster musical performance.

If there is going to be any credit given to the people trying to offer a genuine performance here, though great, they do more harm than good.

Speaking of star power, from the moment we see Sir Ian McKellen’s Gus the Theater Cat, a sense of regret and shame washes over you. As the cat offers a performance recounting his brilliance on the stage, the accolades he once received, you cannot escape the idea that McKellen is begging to be killed and put out of his misery for being reduced to this charade. 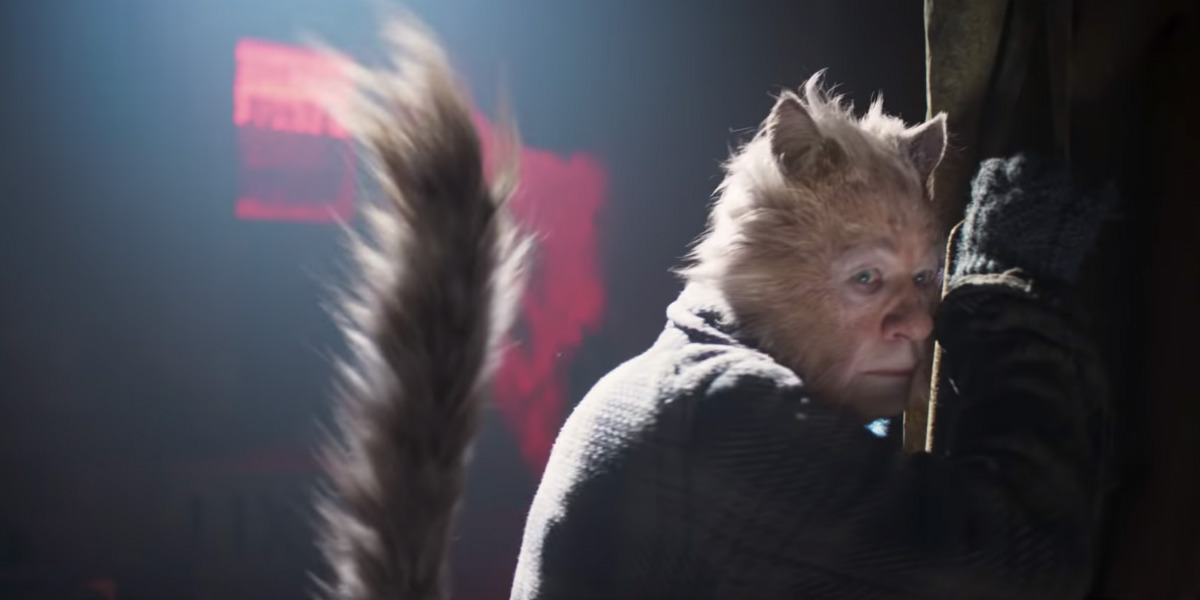 But Old Deuteronomy will have none of his pleading, making the old man perform his song and dance for her amusement (and satisfaction? There is a leg kick done by the Dame that I will never be able to unsee).

The second act, however, turns things around. With full sincerity, I need to give Robbie Fairchild (Munkustrap), Francesca Hayward (Victoria), Steven McRae (Skimbleshanks), and Laurie Davidson (Mr. Mistoffelees) some credit. They were quite incredible.

The opening dance of The Jellicle Ball was stunning and choreographed to perfection. Fairchild is a dream boat in An American in Paris, and watching him perform a ballet is a dream. Same goes for newcomer Hayward and Australian dancer McRae, who gives everything to the introduction of Skimbleshanks. 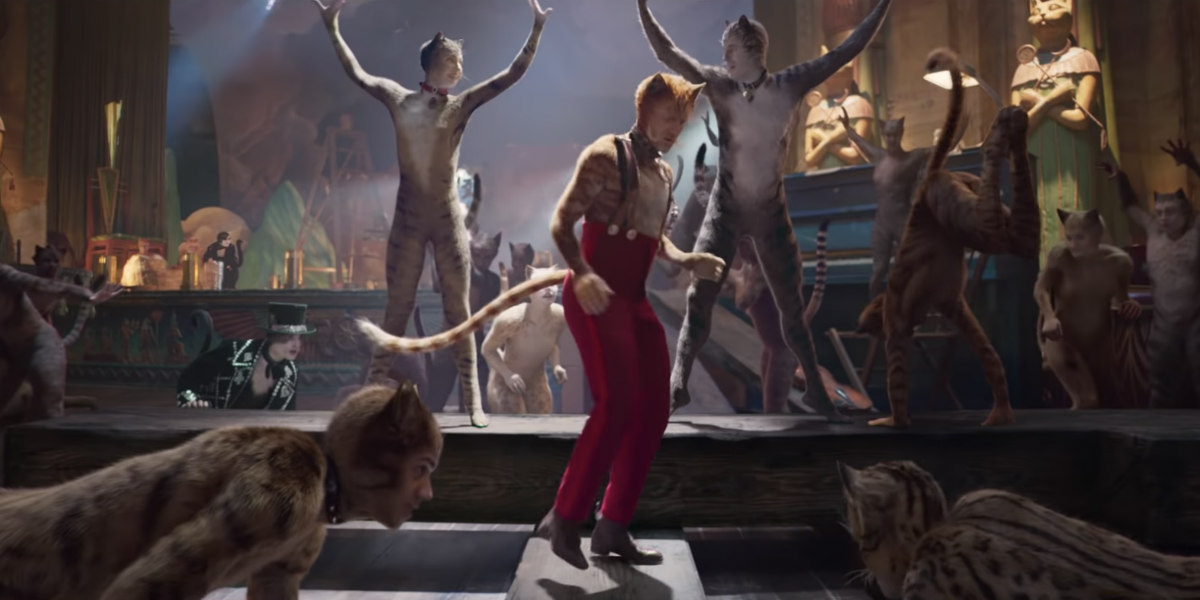 I was overjoyed with the dance-heavy moments, but it was hard to take the visuals up close. Which is unfortunate for Jason Derulo, who would have otherwise knocked Rum Tim Tugger out of the park.

The editing decision to have running commentary from Wilson through his number was… a choice. Derulo does an excellent job in the company, however, providing one of the best facial reactions of the film during Mr. Mistoffelees’ attempt to bring Deuteronomy back.

Speaking of Mistoffelees, I don’t know if it is a compliment, but I mean it as one, that Davidson has the only face that works for what Cats was trying to accomplish visually. He is charismatic, expressive, and always shaded with a faint feeling of fear, which as an audience member, was entirely relatable. 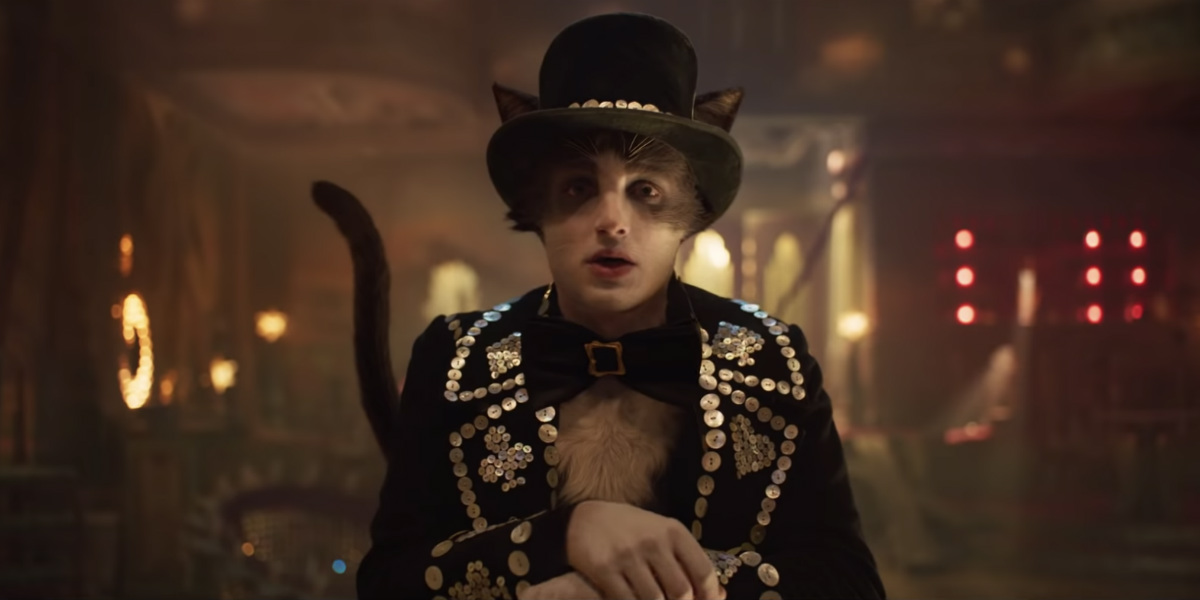 Jennifer Hudson’s Grizabella sang “Memory” beautifully as expected. I would describe the scene, but I followed my heart here and closed my eyes, letting the song wash over me.

This brings us the worst moments of the film —- Idris Elba. Please, stop making this man perform in horrendous CGI films. First his performance as Scar in The Lion King (“Be Prepared” left everything to be desired), and now this muscular, toned to perfection, naked cat song and dance.

I audibly gasped at the reveal of his full body. I wanted it to stop. Yet, I never wanted it to end. I didn’t know where to place my gaze. And I think everyone in that theater was a little embarrassed because we all know where our eyes landed. What waited us there was a void of confusion.

The finale of the musical has always left a lot to be desired, and I don’t think I’ve listened to the final track, ever. But if you’re already in this deep, why not keep going, right?

I don’t think I’ll ever “like” Cats. I don’t think the end justified the means. And I certainly don’t think this movie needed to exist. But as I find myself on the wrong side of the Heaviside Layer, I hope that Cats and the people who need to sincerely promote it over the next few weeks, find peace and comfort on the other side. They deserve it. 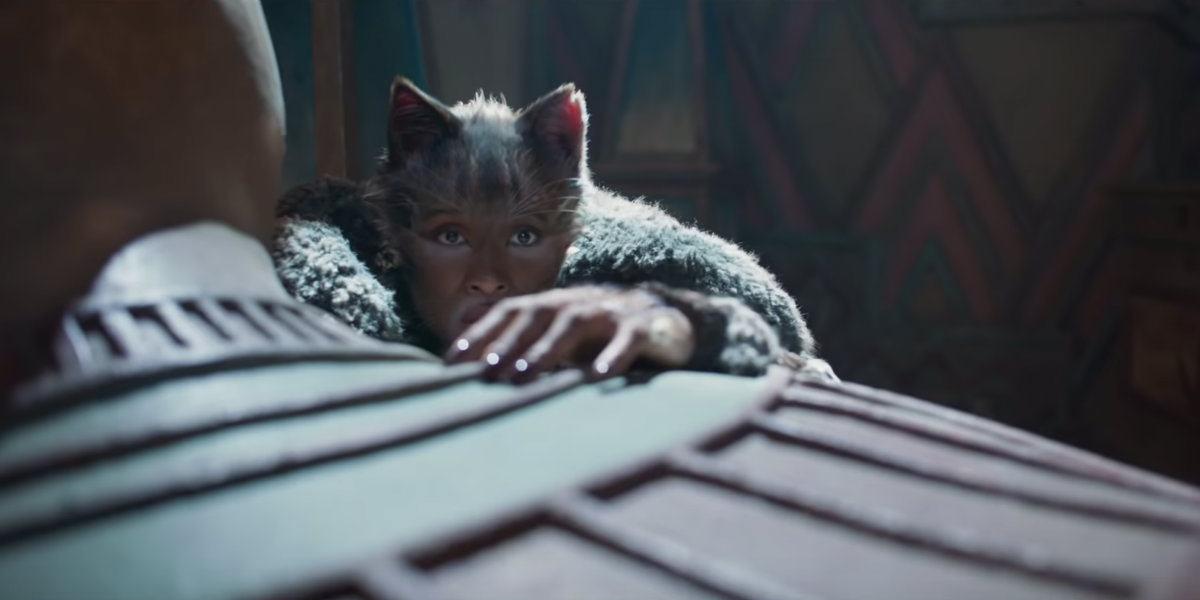 In terms of singing — “Memory” is the clear frontrunner for the best song of the film. But Cats, for all the damage it may have done with VFX, is a beautifully choreographed piece of work. Here are not all, but the best performances in the film, mostly ranked by dance.

Cats is in theaters now.