It has been a bizarre season of Dancing with the Stars.

As Dancing with the Stars season 28 careens into the finals next week, we’ve never seen a season so mired in controversy and conspiracy theories. In fact, DWTS has always been pretty far above reproach — we may disagree with the results, and we may grumble at the judges showing some favoritism, but we’ve never doubted that the dancer with the lowest votes and scores combined would be eliminated. This has been regrettable on several occasions — pour one out for Sabrina Bryan and Juan Pablo Di Pace! — but it was the name of the game.

The only obvious shenanigans that DWTS engaged in was the wholly implausible “protesters” against Ryan Lochte meant to kick-start his redemption arc. Other than that, DWTS has been kosher for a decade and a half. Until now.

The controversies began before the season even got started with the inclusion of Sean Spicer in the cast. DWTS has included political celebrities before — they are usually eliminated quickly (Rick Perry, Tom DeLay) and given no further thought. Bristol Palin was a notable exception, but it was during a simpler time, and as the daughter of a politician, Bristol did not inspire as much ire as Sarah Palin herself would have. (It also helped that Bristol was an adequate dancer, if not a great one, on a uniquely terrible season.)

DWTS has not had any politicians on since the 2016 election, when politics took on completely different stakes in the U.S. But this season, they invited Sean Spicer. No one on the show bothered to hide their contempt, and even host Tom Bergeron (who has always remained above the fray) spoke out against the choice. 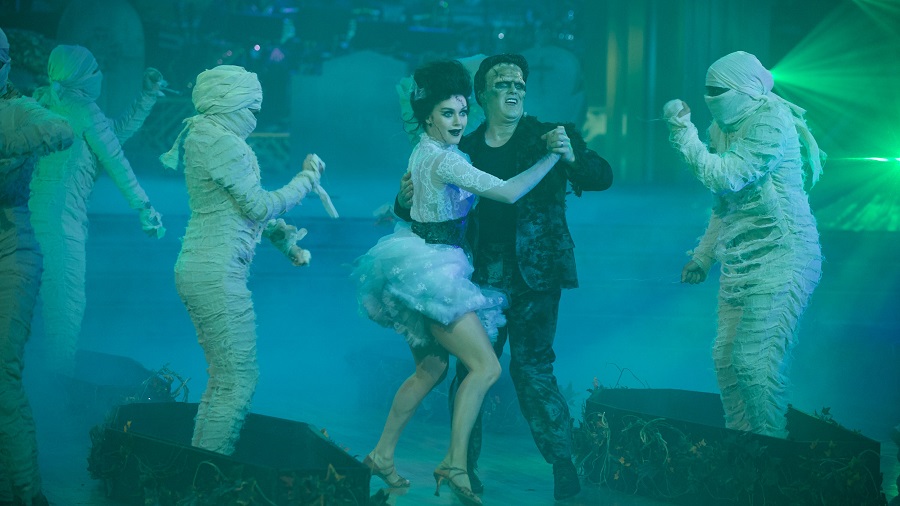 Originally, many thought this was an insurance policy against Sean Spicer so he could be sent packing early on. It could also have been a correction from last season, where many felt Bobby Bones was an undeserving winner (this writer respectfully disagrees; Bobby’s competition was lacking and he put on the best show of the lot). This impression was reinforced by the judges clearly conveying that they would rather be eliminating Sean Spicer every time he didn’t land in the Bottom Two. But if one thinks about it, this voting change is actually meant to help Spicer.

The live voting excludes almost a third of the country, population-wise, from voting — most of which is in the Pacific Time Zone. The same time zone, in fact, that is overwhelmingly Democratic and would absolutely not vote for Sean Spicer. Live voting also excludes the people who don’t watch it live, which would be disproportionately young people (who don’t watch anything live anymore) and people in cities (who have lots of other demands on their time on any given weeknight). Young people and city-dwellers are also overwhelmingly Democratic, and would have voted against Sean Spicer. So this voting change, in many ways, is heavily weighted towards funneling more votes to Sean Spicer — and, indeed, Spicer outlasted all political figures to have ever been on DWTS aside from Bristol Palin.

What the producers’ rationale for rigging the show for Spicer was, we may never know, but the gambit was a dangerous one: DWTS’s viewership numbers are abysmal this season. They’re down 50% from four years ago, and down 70% from the show’s peak; at this rate, the show may soon be put out to pasture.

Going into season 28, many thought Sean Spicer would be the controversy of the season. Little did we know what a roller coaster ride we were on! The conspiracy theorists got their hackles up early, when Christie Brinkley had a tame-looking fall that forced her to drop out in favor of her daughter at the last minute. Such a substitution was unusual for DWTS, so people assumed it was staged by Christie to promote Sailor. This writer never bought the theory, since it seems like an awful lot of hassle to go through, but that would set the tone for the season. 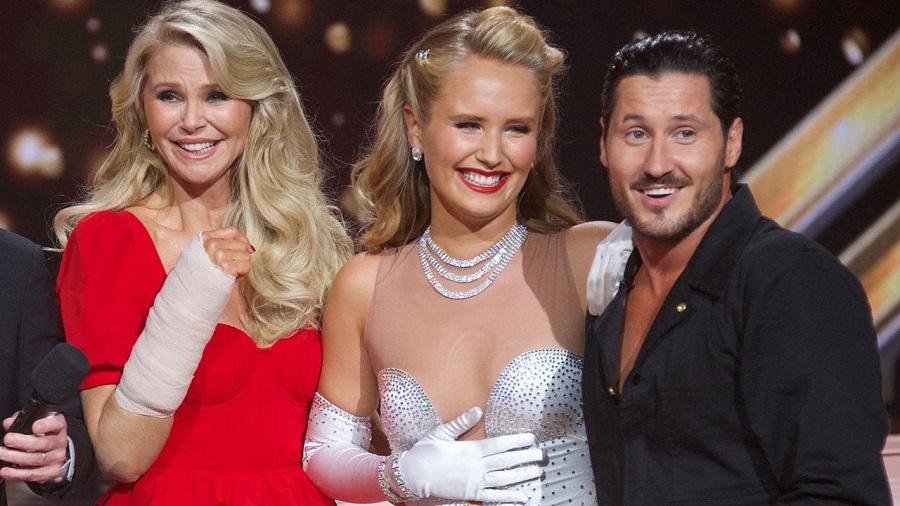 In all, there was a lot of brouhaha, but after a triumphant elimination of Sean Spicer in the quarterfinals last week, there was hope of season 28 finishing strong. Sailor Brinkley-Cook had been eliminated weeks ago, so her inclusion was a moot point. The five semifinalists were all good dancers, at the very least.

Among those semifinalists was James Van Der Beek, who had followed in the footsteps of the two Jameses who had preceded him on DWTS. Every five seasons, there is a James on this show. The Jameses of DWTS are among the very best male dancers on the show; they are immensely likable, humble, and sympathetic. Yet there is an odd jinx surrounding Jameses: Despite being seemingly the perfect contestants, they always lose to an unstoppable pre-anointed champion.

The first James, James Maslow in season 18, was a great dancer. He and Peta had the best showmance on DWTS to date (Alan needs to take notes!). But that season was all about Maks getting the Mirrorball trophy with Meryl, regardless of whether it was deserved, just because Maks had failed so many times.

The second James, James Hinchcliffe in season 23, was called “the best male dancer ever” on DWTS by Julianne Hough; his routines with Sharna were iconic. But despite that, Laurie Hernandez and Val were the expected champions because Laurie was such a great dancer and bubbly personality.

All of this is to say, we didn’t expect James Van Der Beek to win, pursuant to the jinx, but the other Jameses at least made it to the finals. And there was no doubt in anyone’s mind that this James would smoothly progress to the finals of season 18. But instead of a smooth semifinal, Monday’s show exposed the corruption endemic in this season, and leaves us all wondering if maybe all the conspiracy theorists had a point.

While so many of us were united in detesting Sean Spicer, another storyline slipped in under the radar: the competition was rigged for Ally Brooke, of Fifth Harmony fame. It was not really apparent until two weeks ago, but it has since become completely clear.

Ally is a decent enough dancer. While this writer finds her incredibly grating, your mileage may vary. I’ve nothing against her personally.

But it has become painfully obvious that the judges are determined to make her win. Of all the perfect scores this season, only two went to other competitors. In the semifinals, the judges reserved all their ten paddles for Ally. Week after week, they rave about her superlative and flawless dancing.

As we’ve said, Ally is a decent dancer. But anyone with eyes can see she is far from perfect. She often flubs a step or two, and is blatantly out of sync with Sasha in side-by-side portions. Giving her nines would be generous, but reasonable. Giving her tens (and only her) is overplaying the judges’ hand when it’s blindingly obvious she hasn’t earned them.

In prior seasons, skewed scoring was neutralized by viewer votes. Which is clearly what was happening here: voters threw Ally into the Bottom Two thrice in the last five weeks. That is despite Ally rather desperately mobilizing her fanbase online (she appears to have a whole campaign on Twitter where she’ll follow people for 20 minutes if they show proof they voted for her, which just seems sad). It’s clear that America has spoken: They want Ally off the show.

But under the new system, the judges have been able to save her. The first time they did it, eliminating Sailor and Val, it seemed fair — it was a coin toss between the two girls as to who was the better dancer. The second time the judges saved her, they eliminated Kate Flannery and Pasha — once again, it seemed fair, as both were decent dancers (and Ally may have been a smidge more consistent). The third time, though… 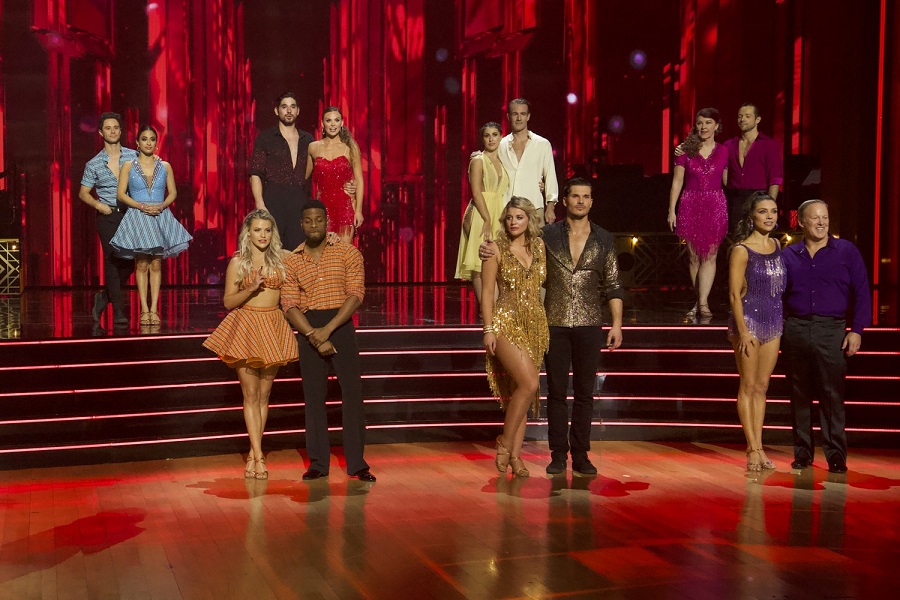 Ally ended up in the Bottom Two against James Van Der Beek and Emma. Objectively, there was no doubt about who deserved to go home. James was one of the best dancers we’ve seen in ages, certainly the best of the season — in fact, until Ally’s unmerited stranglehold on perfect scores began, James was leading the competition in cumulative points. (This is relevant because the judges frequently stressed they make their choice based on the season cumulatively.)

About 10 minutes before the elimination happened, James shared some personal news: His wife had just suffered a miscarriage. His wife then asked him, from the hospital bed, to keep dancing and finish the competition. James had done a foxtrot all about the tragedy, and left the entire ballroom in a near-hysterical state of tears. In fact, the foxtrot itself had been masterfully done, even aside from the emotional baggage. But after all the tears and affirmations and standing ovations… nines from the judges. Even Carrie Ann, who always gives scores based purely on her feelings instead of the dancing, gave a nine.

This didn’t pass the smell test: If James got all nines, then the judges were clearly being made to underscore James and overscore Ally. When Ally and James landed in the Bottom Two, we then saw the most bogus moment in DWTS history play out on our screens.

As half the ballroom once again devolved into tears, the drama ratcheted up. In an unprecedented (and very gracious) moment, Ally tried to cede her spot to James — a move that has never been done, in 28 seasons on the show. The producers refused to honor that request — James would be eliminated and Ally would continue to the finals.

To recap: The best dancer was sent home by the judges. The girl who consistently got the lowest votes from America was once again saved by the judges. And the producers denied her request to cede her spot, when it would have made for amazing headlines and drama that would have goosed the ratings.

So, this begs the question: Who on DWTS is so damn invested in Ally Brooke’s success?

Is it the judges themselves, who have squandered many years of credibility with this call? Carrie Ann Inaba said the following day that she vomited after making the call, but do we believe her?

But the judges do not have the power to change the entire results system of Dancing with the Stars. That power lies with the producers, who have completely changed the system of a 14-year-old flagship show. The most tangible result of that change was not Sean Spicer’s ouster, as it actually favored him: Rather, it was the undeserved promotion of Ally Brooke in the competition over the wishes of the show’s audience.

We don’t generally peddle conspiracy theories here — let’s leave that to UnREAL — but there is something strange going on behind the scenes of the ballroom, and this season has been influenced an unprecedented amount to promote Ally Brooke’s success over that of much more deserving competitors. So… who’s behind it, and why?

Dancing With the Stars, zedited