Daybreak is a frenetic and absurd tale of a post-apocalyptic landscape dominated by teens that manages to be funny, fun and surprisingly sincere.

If you like your post-apocalyptic fare gritty, dark, and decidedly adult, then Netflix’s Daybreak is definitely not the show for you.

Lucky for you, there’s plenty of shows out there for you, and leaving one post-apocalyptic teen show off the docket probably won’t even register on what — I assume — is already a rather full docket of shows anyway.

However, if you like your post-apocalyptic fare funny, fourth-wall breaking and surprisingly sincere, then Daybreak is — at the very least — a very fun way to spend five hours of your time on some lazy weekend.

In that way, Daybreak is a little bit like a high school house party — there are cliques and there are drugs and everyone acts a little bit ridiculous, but there’s also enough fun and hilarity set to really fantastic music to make it worth your while.

For the curious, here’s the set-up: Daybreak takes place in a burned out post-apocalyptic world in which bombs that must have been biologic in nature (that’s actually the explanation from the show) killed nearly all the adults and turned the rest into ghoulies. They aren’t zombies because getting a bite from them doesn’t turn you into one (as we learn two episodes in) — they’re just mindless automatons who want to eat you and wander around all day saying the last stupid thing that popped into their head.

Which means that the world as we find it in Daybreak is filled with nothing but kids (well, initially, at least). Our introduction to this brash new world comes by way of 17 year old Josh Wheeler, a snarky yet charming self-described loner who enjoys skateboarding and fourth-wall breaking, and who has spent the last six months since the end of the world looking for the love of his life, Sam.

As for the rest of the teens who made it out from the rubble of society? Well, I’ll let the trailer tell you what they’re all up to.

Full disclosure here: I am at least 14 years older than any of the protagonists on this show, and, in fact, related more to the stories and characters of Daybreak’s resident cool teacher Ms. Crumble, played by Krysta Rodriguez, and Principal Burr, played by Matthew Broderick.

Which means that the first episode and a half or so were the hardest for me to get through, but only by virtue of that fact that I’m old and this show was not made with me in mind.

Part of this comes from the absurdity of the set-up, which doesn’t even seem to follow its own internal rules — all adults are dead or ghoulies, except for the few we meet that aren’t? There’s also a fair suspension of disbelief to accept the fact that all the surviving kids codified their cliques into tribes of sort, with the jocks becoming Mad Max inspired fascists, the cheer squad becoming Amazon-inspired warriors, and the STEM kids…dressing in black?

However, the biggest suspension of disbelief for me was the fact that Colin Ford’s Josh Wheeler — a tall, thin, floppy haired, conventionally handsome white guy who looks like this — was supposed to be an outsider in the high school microcosm. On what planet and in what universe?

The show is also initially fond — overly so, at times — with Josh turning to the camera and letting the viewer know exactly what’s going on. It’s some cheeky fourth-wall breaking that only isn’t unbearable because Colin Ford is talented enough and charismatic enough that it stays just on this side of charming rather than obnoxious.

Which means there was enough charm, fun and hilarity in the first episode to get me through the obsessive self-awareness of the show, and by midway through the second episode, I began to realize that the absurdity is the point — something which the show not only recognizes but delights in.

There is a scene in the second episode involving Josh, a key, and a teacher turned ghoulie called The Witch that’s gruesome and strange in the most ridiculous way possible, and was the exact moment I completely bought into the show. It was that scene (which you’ll understand once you watch it) where I stopped enjoying Daybreak in spite of itself and started enjoying it for what it wanted to give me.

And, as likable as Josh is (and he’s very likable), just when his boy-searching-for-his-lost-love story starts to get a little bit tired and the fourth-wall breaking a little bit unbearable, the show switches perspectives and then really gets going. 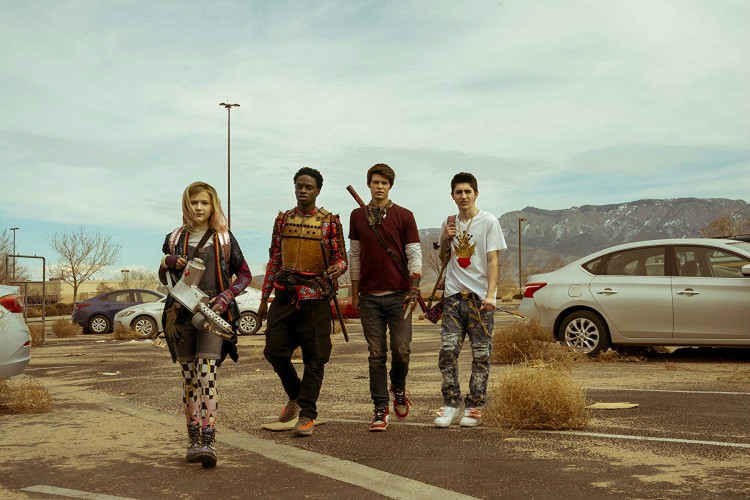 The first two episodes of Daybreak lead you to believe that this is your standard ‘boy tries to find his lady love in the apocalypse’ YA tale, which can feel a little off-putting given that the trailers have made it out to be an ensemble show.

Never fear though, viewer, this is a true ensemble show, one which employs a variety of perspectives and grows more comfortable with itself as time goes on. Josh Wheeler is designed to introduce us to the world, and his episodes give us his backstory — but this is not his world and this show is not solely his story. The third episode leaves the fourth-wall breaking behind and switches to voiceover, with Alyvia Alyn Lind’s 10-year-old unstable genius Angelica taking over the story’s reigns.

If Josh Wheeler is Ferris Bueller in the apocalypse, then Angelica is Hit Girl in the apocalypse — a foul mouthed ass kicker who has no trouble ordering around the much older people around her. Angelica is rough around the edges — and does sometimes feel like a vehicle for the show to highlight its edginess — but she’s also just a young girl looking for her own people. Her story is about wanting to find a tribe of her own amidst the chaos of the new brand of high school which emerges from the ashes of society — and the lengths she’ll go through to make sure that tribe stays intact.

The fourth episode switches again, and focuses on Matthew Broderick’s Principal Burr. This was easily my favorite episode — but of course, as a current teacher and resident 31-year-old who watched Ferris Bueller obsessively as a teen — it would be. I won’t give too much away about his story, as the fourth episode has a few reveals and plot twists, but the fourth episode was where I thought Daybreak may not just be good for what it was — it might be a good show. Matthew Broderick tempers the general zaniness of the show to deliver a slower, softer performance that’s relatable and horrifying all at once.

However, as much as the fourth episode is my personal favorite, the fifth episode focusing on Austin Crute’s contemplative samurai Wesley Fists is by far the best episode of the whole series. While Josh’s story is of finding love in the apocalypse and Angelica’s is of finding her place in it, Wesley’s is about finding redemption — which easily makes him the most interesting teen character of the show. In fact, I wish Daybreak had been anchored by his story rather than Josh’s to begin with.

In his episode, Daybreak does away with both character voice overs and fourth-wall breaking, and instead Wesley has his story narrated by Wu-Tang Clan’s RZA. That alone is enough to catapult it past the rest of the episodes, but Wesley’s backstory is by far the most captivating, and Austin Crute delivers an empathetic, funny and grounded performance that makes me hope he goes on to do big things in his career.

If we’re going to wind it back around to my initial metaphor — Daybreak as a high school house party — then it certainly won’t be the best one you’ve ever been to. It’s a little awkward at times, and tries too hard — especially at the beginning — and there’s the feeling that you don’t get to see enough of the people you actually want to see.

However, the music kicks ass and there’s enough laughs to be had, enough fun to indulge in, and enough cool people to meet to make it worth your while. I’ll certainly be back for a second round.

‘Daybreak’ launches on Netflix on October 24.