DC Universe’s Harley Quinn is an off-the-wall revenge tale that manages to be both uproariously funny and genuinely evocative.

If you’re already a Harley Quinn fan, then DC Universe’s Harley Quinn will remind you exactly why you love Harley.

Basically, no matter who you are and where you fall on the Harley Quinn fan meter, DC Universe’s newest animated show will give you lots to love, lots to laugh about and more than a few moments of ‘holy shit, I can’t believe this show just did that.’

This show is another fantastic example of the kind of high quality we’re used to seeing from DC Animated ventures. While the tone and mood of Harley Quinn is a far cry from other DC Animated classics like Justice League Unlimited or Batman: The Animated Series — or even more recent iconic shows like Young Justice — this show is absolutely on the same level as those animated series in terms of its storytelling, animation, voice acting and overall quality.

This DC Universe animated show is exactly everything you would’ve guessed and all that you’d want from a show about Harley Quinn — it’s as absurd, obscene (there are around 21 or so ‘fucks’ said in the second episode alone), frenetically paced and violently gory as its titular character. Harley zips from scene to scene, always on the move, kicking ass with a mallet and a bat, giving absolutely zero fucks while also saying fuck in every other scene.

But the show also does a fantastic job of deepening Harley’s character. While casual fans may only know her as Joker’s girlfriend, the show recognizes that Harley’s actually at her best and most interesting when she grows beyond that role. The show crafts Harley into a real character rather than just keeping her as a caricature, and in doing so, gives us a show that’s just as good at making us laugh as it is at telling an evocative, emotional story about the importance of friendship and the value of recognizing your own self-worth. 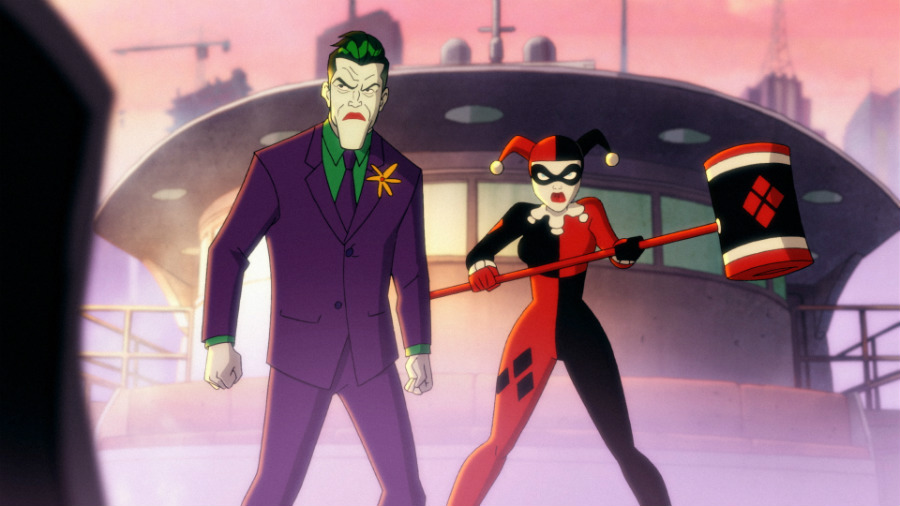 First off, I wanna stress that Harley Quinn is an adult animated show, and that when you turn it on for the first time, you should absolutely make sure any children are far, far away from the TV screen.

From the very first episode, it’s made incredibly clear that this is absolutely not for kids. The first scene has Joker literally tearing off someone’s face and Harley breaking the bones of many a rich white man with her mallet. Then, Batman swoops in and Harley taunts him about being “someone who fucks bats.”

This is a show that delights in its gore and violence, and doesn’t shy away from dirty jokes and obscenity — which is all pretty par for the course if you’re going to make a villain show centering around Harley Quinn.

And because this is a show about Harley, you can expect it to be as bright, bubbly and proudly ridiculous as that character. The Gotham we see here isn’t the doom and gloom of Batman’s perspective, but a neon wonderland of sizzling brightness and illuminated contrast, chock full of the ludicrous and the zany.

The characters, too, aren’t dark and gritty, trapped in their feelings or brooding silently. Instead, what is on display in Harley’s Gotham is the absurdity and hilarity implicit in characters dressing up in costume and fighting one another.

All this to say — this show is really fucking funny.

The pilot starts out with an incredibly funny opening sequence and the laughs never really die down from there. And I don’t just mean the rest of the pilot is funny (it is), I mean that the entire season stays consistently, laugh-out-loud funny from beginning to end.

This isn’t the humor you’re used to seeing from other comic book stories — the sharp jabs and quick quips dropped in here and there. Instead, Harley Quinn is funny on multiple levels. Yes, of course there are quips and jabs dropped in here and there, but there are also so many great jokes that will elicit loud laughter, clever one-liners that will take you a second or two to catch onto, and scenes and situations that the show builds out into pure and utter absurdity.

The humor in Harley Quinn is one of the best examples I’ve seen of a show melding highbrow and lowbrow comedy. It isn’t afraid to use basic physical comedy and grab the low-hanging fruit, but it also doesn’t shy away from being clever with its dialogue and sharp with the way it uses framing and scenes.

More than this, it recognizes the value of using comedy to punch up, as they say, and bring to light more serious topics. The humor in this show is put there to make us laugh, but it’s also used as a way to further character arcs, deepen the storytelling and critique broken societal constructs. 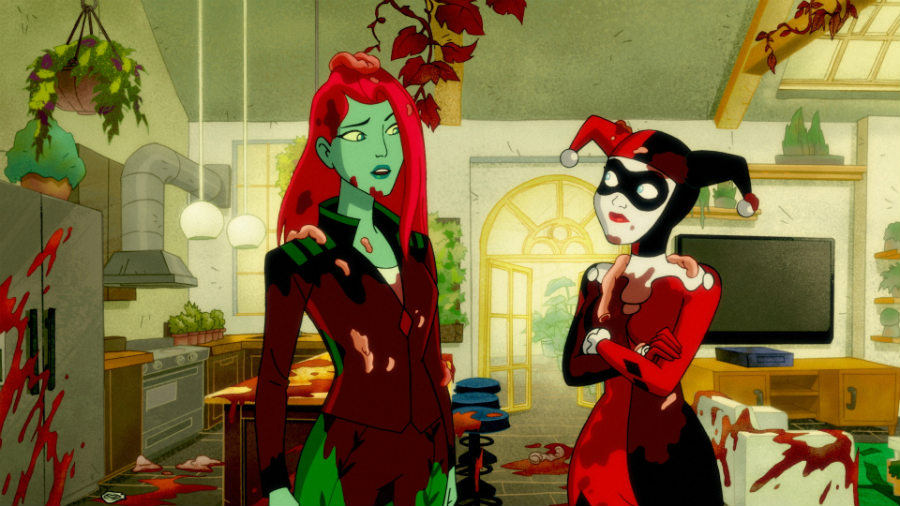 If the show was just as funny as it was and nothing else, I’d still really enjoy it — that’s how funny it is.

However, in addition to being utterly hilarious, Harley Quinn likewise does a fantastic job in building up the cast around the central character as well.

This show is all about Harley Quinn rebuilding her life, and doing so takes support. Harley is lucky enough to be surrounded by a truly great support system.

It all starts, of course, with Poison Ivy, her best friend and number one support system. To me, Harley is obviously the star, but Poison Ivy emerged from this show as my favorite character. She’s the perfect grounding force and foil for Harley’s batshit crazy energy, and Lake Bell does incredible work as Ivy.

A self-proclaimed ecoterrorist rather than a straight up supervillain (which is what she’s really always been), Ivy is the steadying force that allows Harley to finally recognize Joker for the abusive asshole that he is and start to forge her own path without him.

The dynamic and chemistry between Kaley Cuoco’s Harley and Lake Bell’s Ivy is absolutely perfect and recalls two of the greatest best friend dynamics we’ve seen on television — Leslie Knope and Ann Perkins from Parks and Rec and Abbi and Ilana from Broad City.

(As an aside, I will say my one major criticism I have of the show is that I wish it could’ve taken the more romantic route with Ivy and Harley. There are certainly enough hints throughout the season for it to have gone there. I will say that I could see it making sense that they wouldn’t, given that Harley is in the process of rebuilding her life and probably needs to focus on herself first rather than a new relationship, but I hope they keep that door open for the second season.)

Other than Ivy, Harley likewise puts together a crew of outcast villains in her quest to join the Legion of Doom. There’s Clayface, played by Alan Tudyk (who also voiced Joker), King Shark, played by Ron Funches, and Dr. Psycho, played by Tony Hale). None of these members are first-stringers, and they’re a bit of a hodgepodge, but they wind up coming together like a real found family throughout the season and become another support system for Harley to lean on as she builds herself back up. 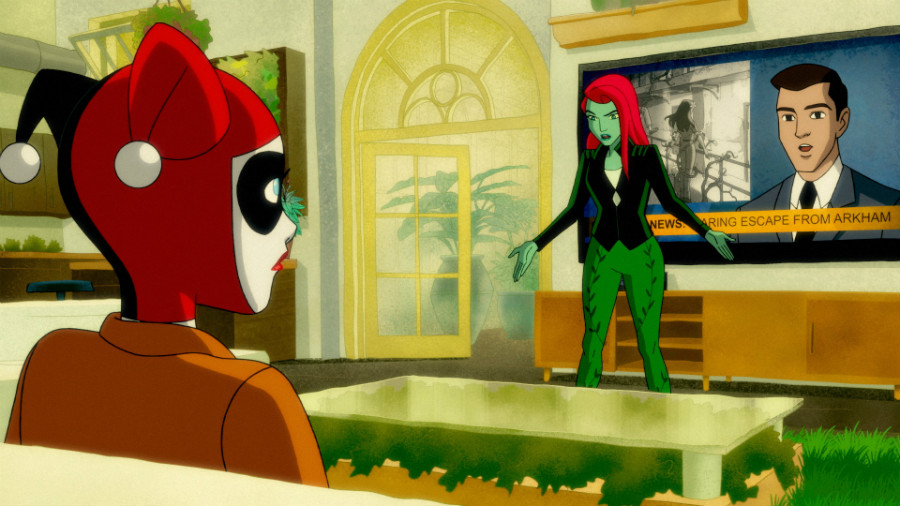 However, what elevates this from a fun show to one of my favorites of 2019 is the fact that it also aims to do more than just make us laugh — it likewise aims to tell a real story with complex and complicated characters.

As I mentioned earlier, casual fans may primarily know Harley as Joker’s girlfriend, but the truth is that Harley Quinn as she is now in the world of DC comics has long outgrown that limited role — we’ve just never gotten to see that growth to its full extent in the more recent on-screen depictions (though it looks like Birds of Prey will be going there!).

Harley Quinn and Joker have been such an iconic couple for such a long time, but what this show does is completely dismantle that pairing brick by brick — for both the character and the audience watching at home. In doing so, it exposes that relationship for the toxic and abusive mess that we’ve always known it to be.

Which means that for all its absurdity and obscenity and gore, at its heart, Harley Quinn is actually a feminist tale of empowerment about leaving your abuser, rebuilding your identity and self-worth, and forging a new life out of the rubble of your old one.

It’s a show that not only recognizes how great a character Harley Quinn truly is, but capitalizes on that greatness by telling a hilarious and surprisingly heartwarming story that will remind old fans why they love Harley Quinn so much and give new fans a reason to stan.