Not only does 2020 mark a new year, it also marks a new decade. This means more news, good and bad. What headlines do we want to see, and which do we want to avoid?

In 2019, we wrote about the headlines we did and did not want to see that year. It’s always fun to go back and look at what actually came true — for better or for worse.

For its part, Legacies is doing pretty well, with at least one familiar face showing up in season 2. On the other hand, there have been no announcements for Frontier season 4.

Though it wasn’t much of a surprise, Green Book still managed to disappoint audiences when it won the Oscar for Best Picture. Other movie lovers are having a better time, however, now that it seems as though Percy Jackson could be getting a reboot from Disney.

While 2019 was still mostly a hellscape, it was a decent year for pop culture. Disney+ has brought a lot of joy to many, many people, the Arrow-verse has gotten bigger and better than ever before, and Stranger Things once again took over the world.

Here’s to hoping 2020 brings us more of what we love and avoid those news stories that break our heart.

❌ Netflix goes in a new direction 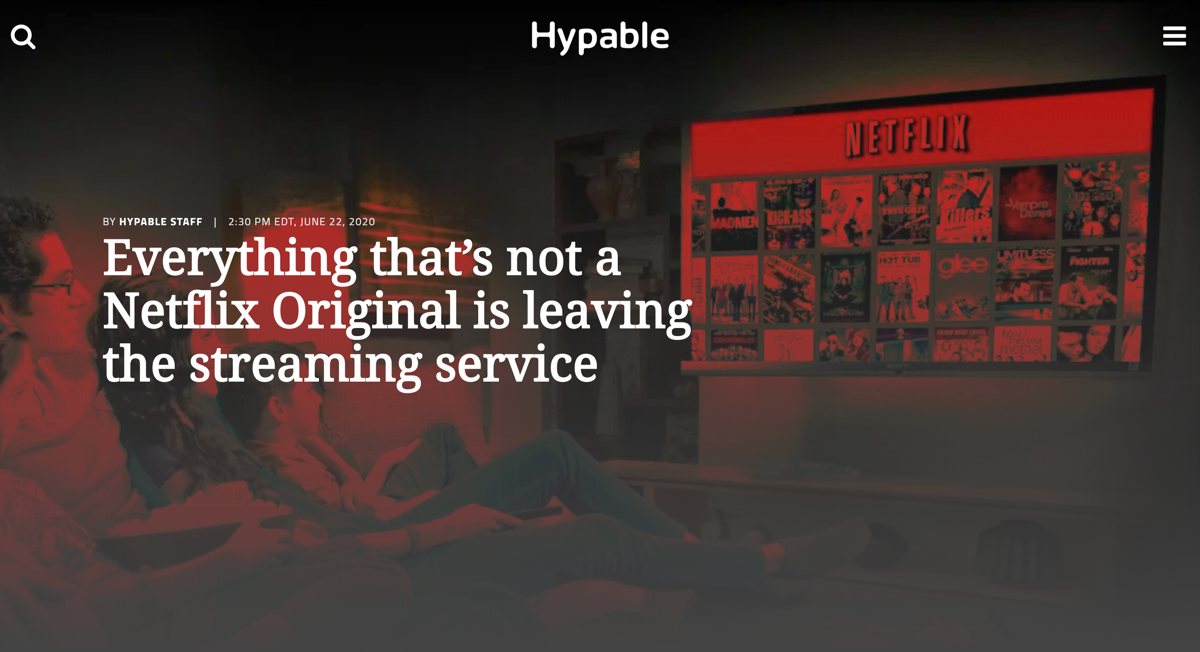 Yes, Netflix has become an acclaimed content creation engine in its own right, but that doesn’t mean we want our “Netflix and chill” nights to be limited to Stranger Things and The Irishman!

With so many streaming services competing for legacy content, all of the old movies and TV shows we love could soon have a designated home on one of the other many options. If content becomes scarce or costs become prohibitive, Netflix could decide to channel all of their resources into their Netflix originals. For those that either don’t feel like, or can’t afford to subscribe to all of growing number of streaming services, we want Netflix to remain a place where you can explore amazing original content and aimlessly scroll through a diverse array of old favorites. — Kendra Cleary 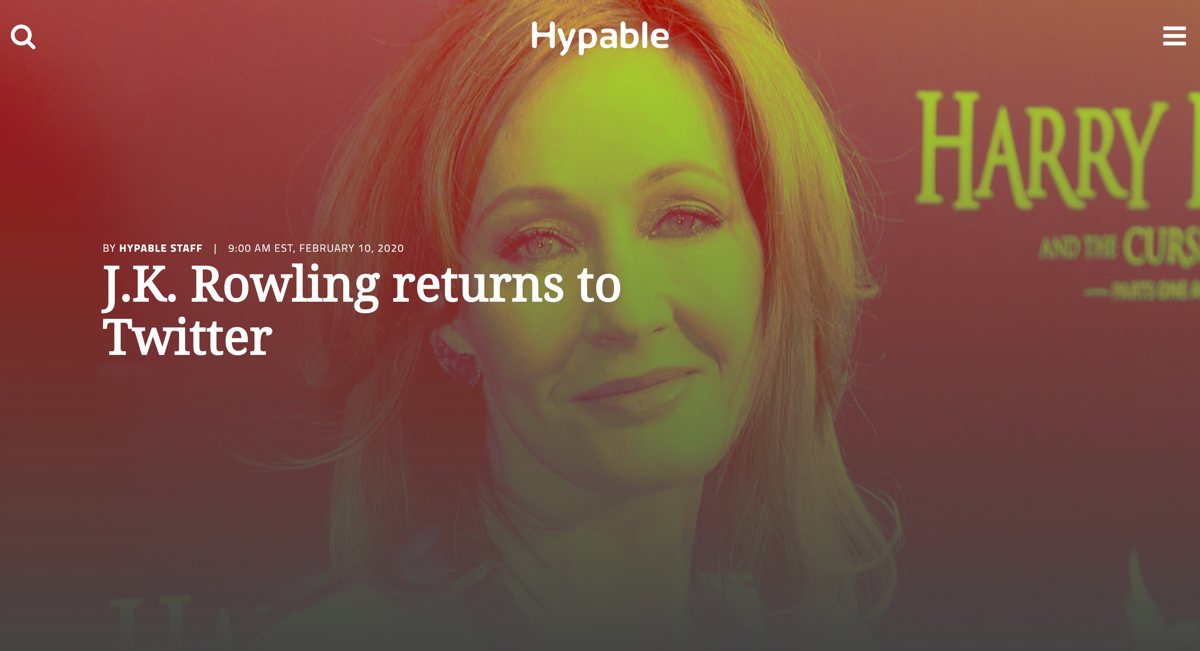 Remember when J.K. Rowling spent all her time on Twitter? I wasn’t a fan of when she’d go on political tirades, but I do miss her dropping little nuggets about the Harry Potter and Fantastic Beasts stories from time to time. It reminded me of her original website, where another surprise was always around the corner.

The Twitter Wars she’d engage in and a lot of Harry Potter fans turning on her may’ve caused her to leave the platform for good. I know that could not have been healthy for her, but I’d love to see her come back and manage her Twitter presence differently, so that it’s not as much of a mental burden. Maybe ignore the Mentions page and have an assistant pick out messages for her to reply to. Come back once a week and share an inspiring message, a little fun fact about your work, or preview what’s coming next. We’d love some answers to minor Fantastic Beasts plot points. We’d love some additional context about developing The Cursed Child. We’d love to hear what you’re working on — any little tease goes a long way. The Harry Potter fandom could use a shot of excitement right now, and hearing from Jo would help significantly. — Andrew Sims 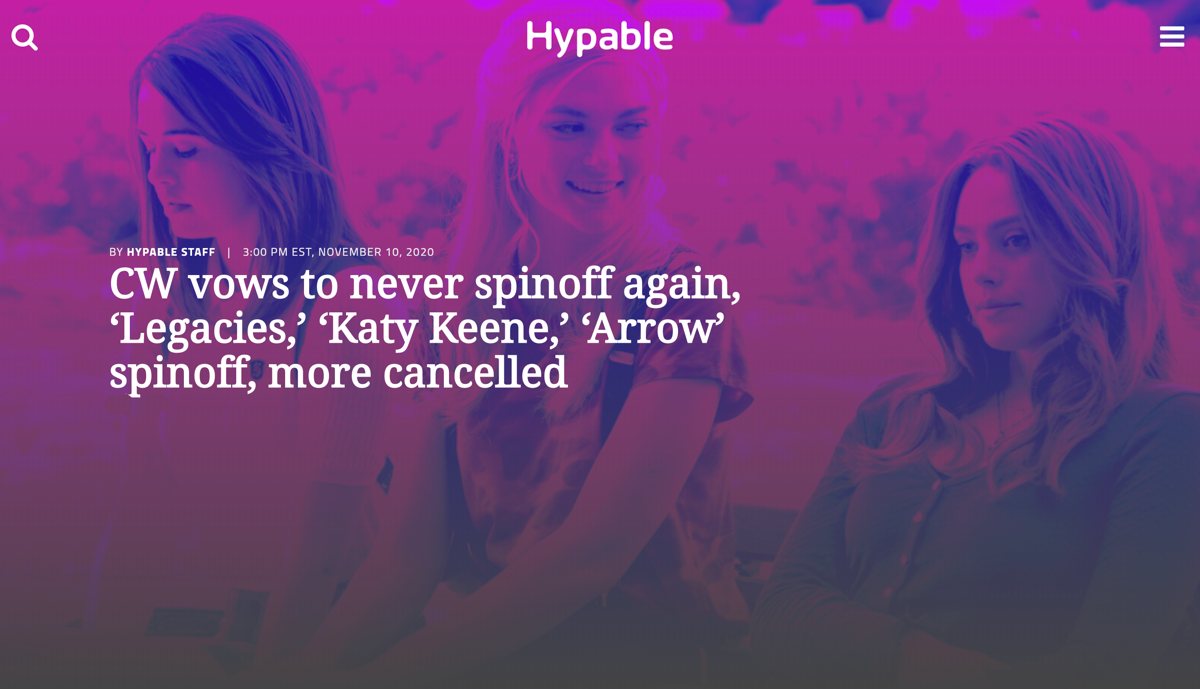 When it comes to spinoffs, the CW is pretty much the king of the castle, and with Arrow, Supergirl, and The 100 all getting brand new spinoffs for the 2020/2021 season, they certainly aren’t losing any enthusiasm for the idea. With the addition of the new spinoffs, it’s probably getting close to a 50/50 split at this point.

And I’m not complaining. My favorite show on TV right now is Legacies, a spinoff of the The Originals (which itself was a spinoff of TVD). Dizzy yet?

There’s a good reason that the CW keeps finding ways to hold on to valuable properties after casts and creators are ready to move on. Not only does it keep the same viewers tuning in, it has the added bonus of being a great jumping off point for new fans. Legacies may exist in the TVD universe, but it is a story all its own. Knowing what came before may provide greater insight into what’s on screen, but it’s not necessary.

I definitely don’t want to see them do away with spinoffs, but even I can admit that it’s starting to look a little crowded with spinoffs on the CW’s fall schedule. I’ll just keep my fingers crossed that they don’t start questioning themselves anytime soon. — Kristen Kranz 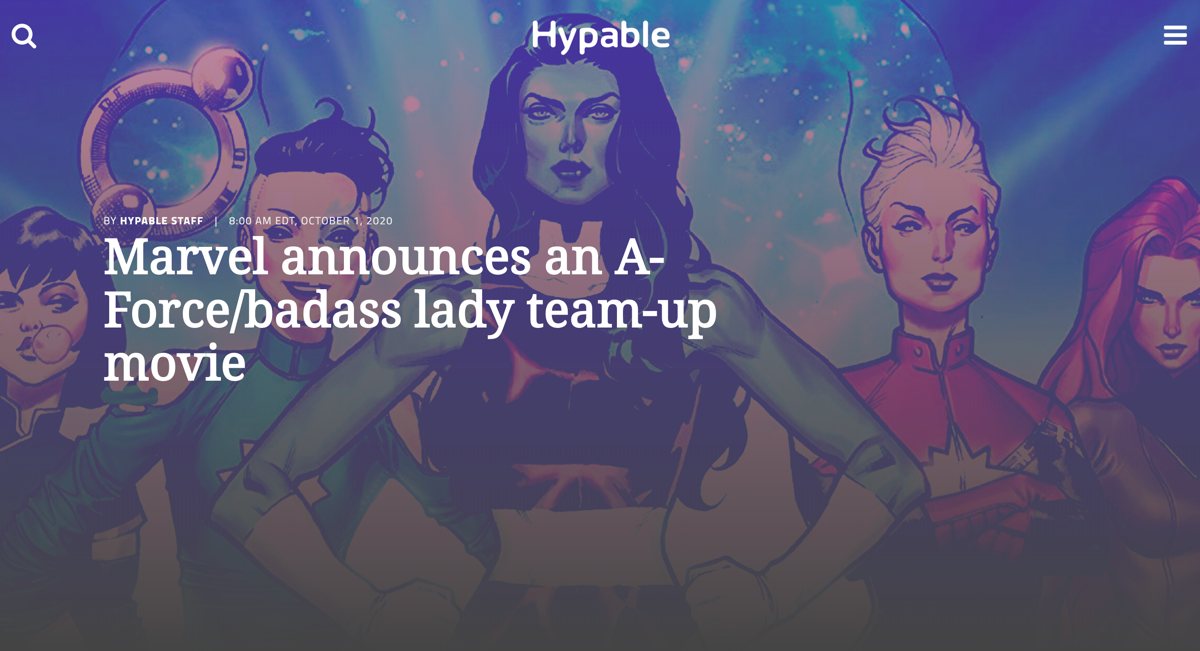 After the very obvious “Hey, women, we’re throwing you a bone with this scene even though Captain Marvel clearly doesn’t need help getting through this crowd of baddies” scene in Avengers: Endgame, all that has been on my mind, as well as the minds of thousands of other women in the world, is “Okay, so when are we getting our all-female team-up?” The actresses who play the women of Marvel have even campaigned for it and spoken openly about how much they want to do it.

So, Marvel, let them do it.

With Black Widow coming out in 2020, there’s no better time to announce the movie women around the world have been waiting for. It doesn’t even have to be in any sort of continuity or the same timeline that everything else has been in up to Endgame. In fact, Endgame and all of the ridiculous time travel stuff that went down in it is the perfect jumping off point to make this happen.

I’m talking Black Widow (she NEEDS to be in this), Captain Marvel, Scarlet Witch, She-Hulk, Hellcat (PLEASE; BUT DO HER RIGHT THIS TIME), Wasp, Shuri, Okoye, Rescue, Nebula, Gamora, Valkyrie, Mantis, PEGGY GODDAMN CARTER, Sharon Carter… Anyone and everyone. This would be the team-up of the century and it’s one that would make history. Marvel, get on it. — Danielle Zimmerman

❌ Disney+ isn’t as perfect as it seems 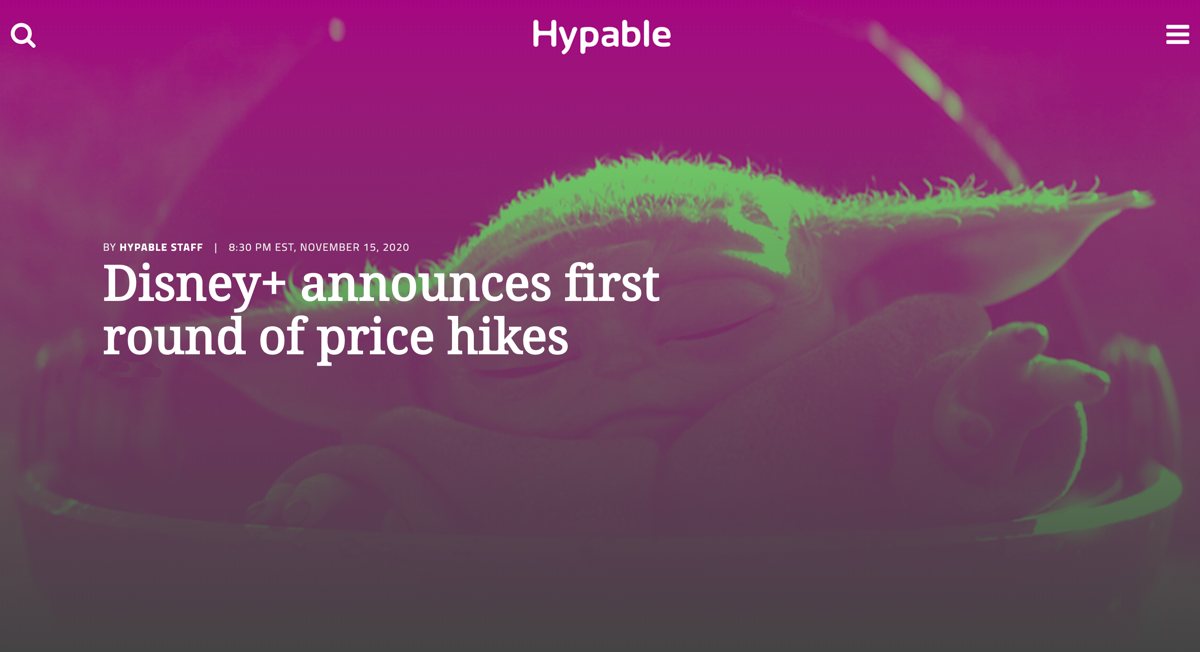 All good things must come to an end. Disney+ is an incredible streaming service that has exceeded nearly every expectation, and with such a large array of content we actually want to watch (there sure is a lot of shit on Netflix), that $6.99 price point is too good to be true. Now that they’ve got us subscribed and addicted, it’s only a matter of time until Disney+ announces its first price hike. I expect a bump of $1 or $2 in the next two years. 2020 may be a little early, but a price hike might be at least signaled to shareholders sometime in the new year. If you want to lock in that $6.99 price or better, you should consider taking advantage of the yearly subscription, which’ll save you a little every month. — Andrew Sims

✔ We get another amazing book-to-film adaptation 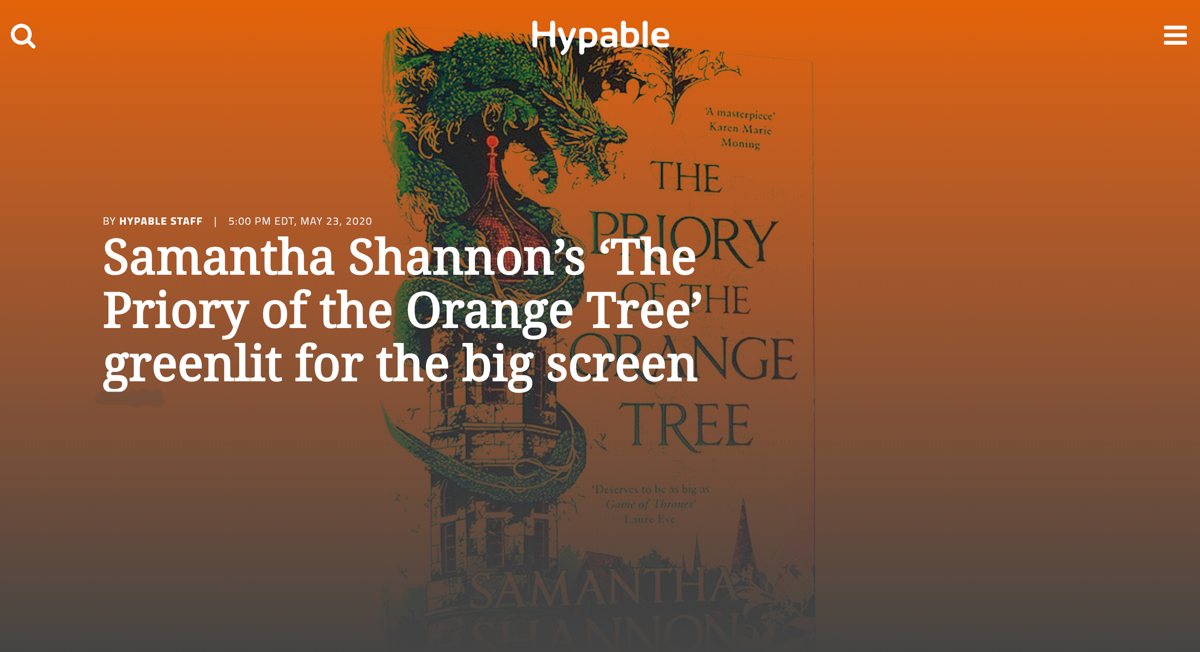 It’s no secret that The Priory of the Orange Tree was one of the best fantasy novels of 2019. Samantha Shannon created a contained world that blew readers away with beautifully written prose, atmosphere, and plot that would transfer well to the big screen.

Along with dragons and feuding kingdoms, there is a depth to Samantha’s writing that would turn this LGBT+ epic fantasy novel into a blockbuster franchise alongside the likes of Lord of the Rings and Star Wars. Only, I’d like to see it helmed by women.

Samantha herself is writing the pilot for The Bone Season TV show that’s in the works, so her taking on the screenplay for The Priory of the Orange Tree, while daunting, isn’t impossible to imagine. — Beth Aderhold 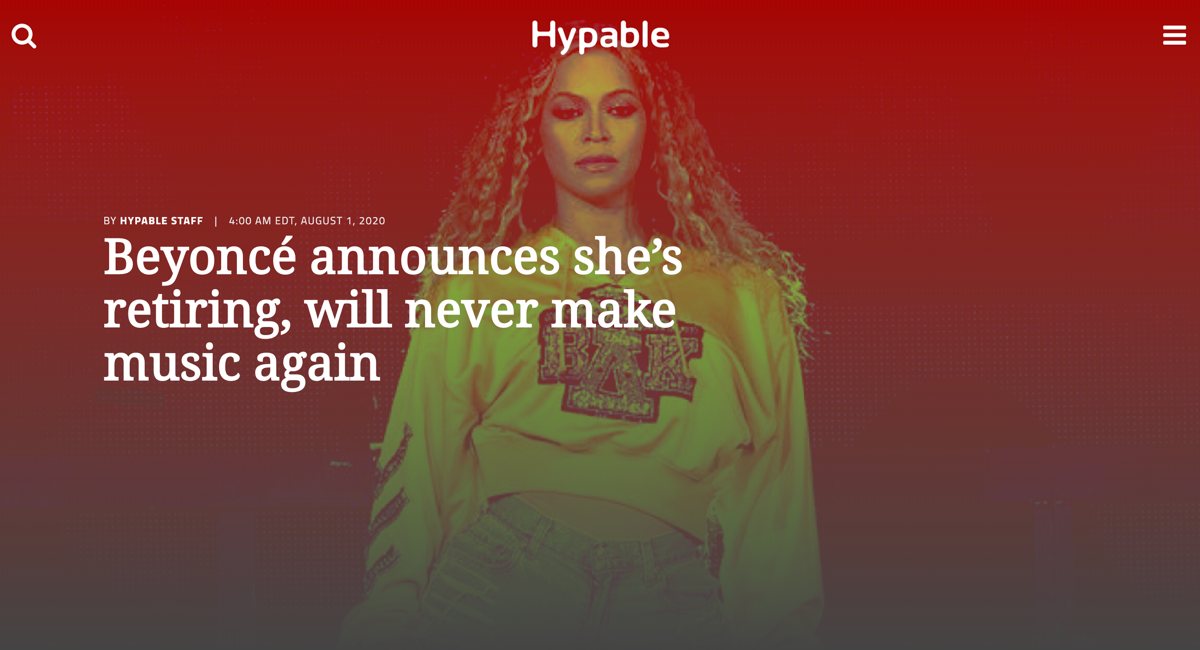 I don’t even want to write this blurb because the idea of Beyoncé retiring is so devastating. Even though she’s been in the industry for a good long while, it feels like she’s still on the rise with every new album she puts out. Lemonade completely changed the game, between the candid and powerful songs and the fact that she made the whole thing is secret and then just…released it. But what about the Beychella performance? Stunning.

I’m not the biggest Beyoncé fan in the world, but even I would be heartbroken if she decided to take a step back and stop doing what she was clearly born to do. She’s been using her power to elevate women — and particularly Black women — for a good long while now, and even though not everyone’s on board with what she’s doing, I’m happy to see her living her best life and doing the most she can with it. — Karen Rought

✔ We finally get a solution to all our problems 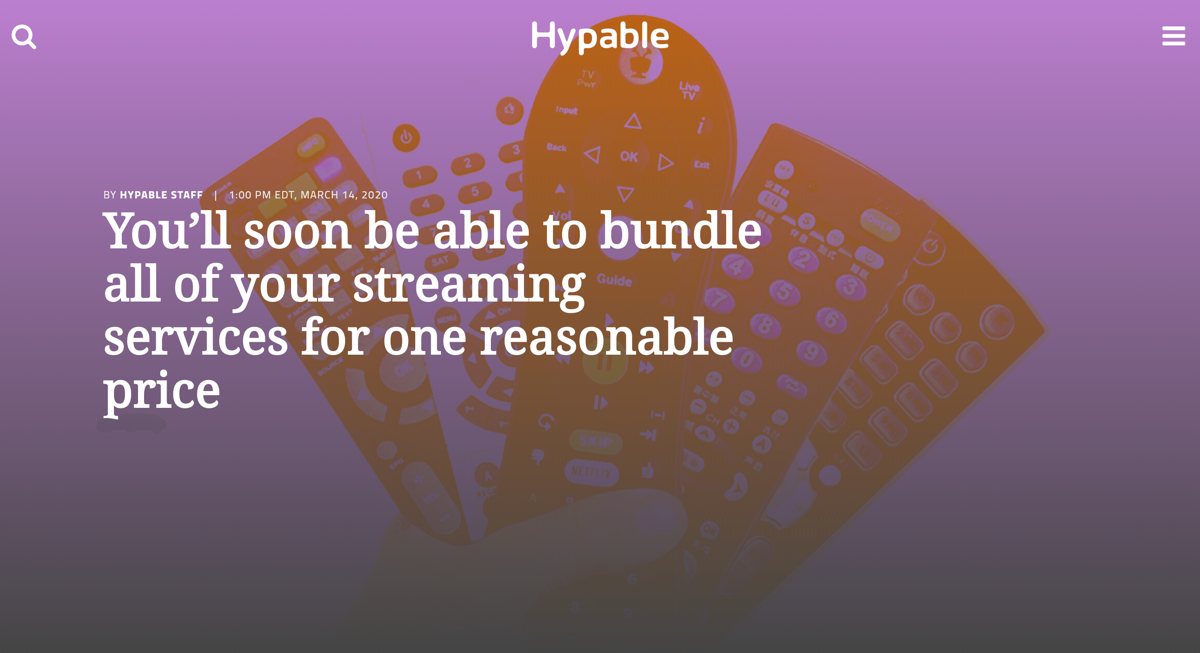 Remember when you decided to cut cable and switch to streaming services because of the money you’d save? Well, with content now split between Netflix, Hulu, Disney+, Apple TV+, Amazon, HBO Max, and more, we’re basically right back where we started.

The number of streaming services on the market is getting to be ridiculous. Even if you’ve managed to subscribe to them all, it’s still a chore to search through each one to find something you’re looking for! We need an option to bundle all, or at least some of these services into one package for a reasonable price. Bonus points if the platform also allows you to search all of your streaming services for content simultaneously. — Kendra Cleary

❌ A beloved adaptation gets the redlight 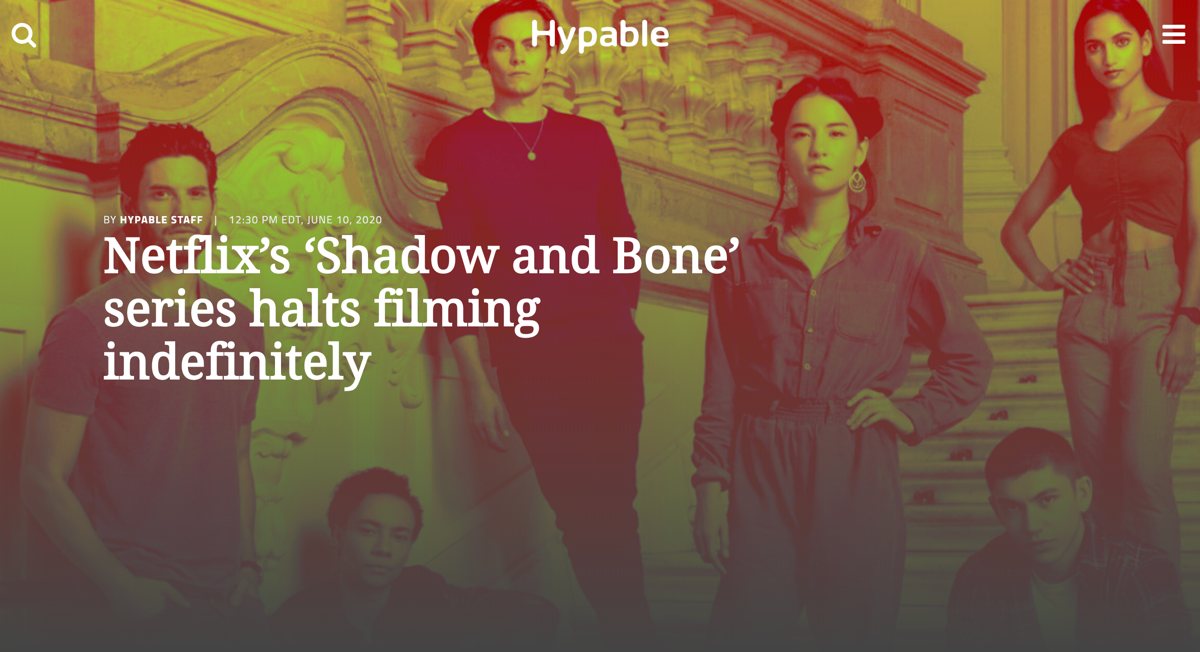 Like many fans of Leigh Bardugo’s Grishaverse YA fantasy book series, it seemed too good to be true to get a TV series based on Shadow and Bone and Six of Crows. While things seem to be going smoothly, what with Netflix being able to snag Ben Barnes to play the Darkling, a feat that many popular series have tried to accomplish, what if it’s not meant to be?

Shadow and Bone was set to drop on Netflix in Fall 2020, but there’s always a chance something could go wrong and it gets pushed back — indefinitely. Given Netflix’s bad luck in the past, the future of the series could be up in the air and fans won’t want to to hold their breath. — Beth Aderhold

✔ Rick Riordan gives us more of what we want 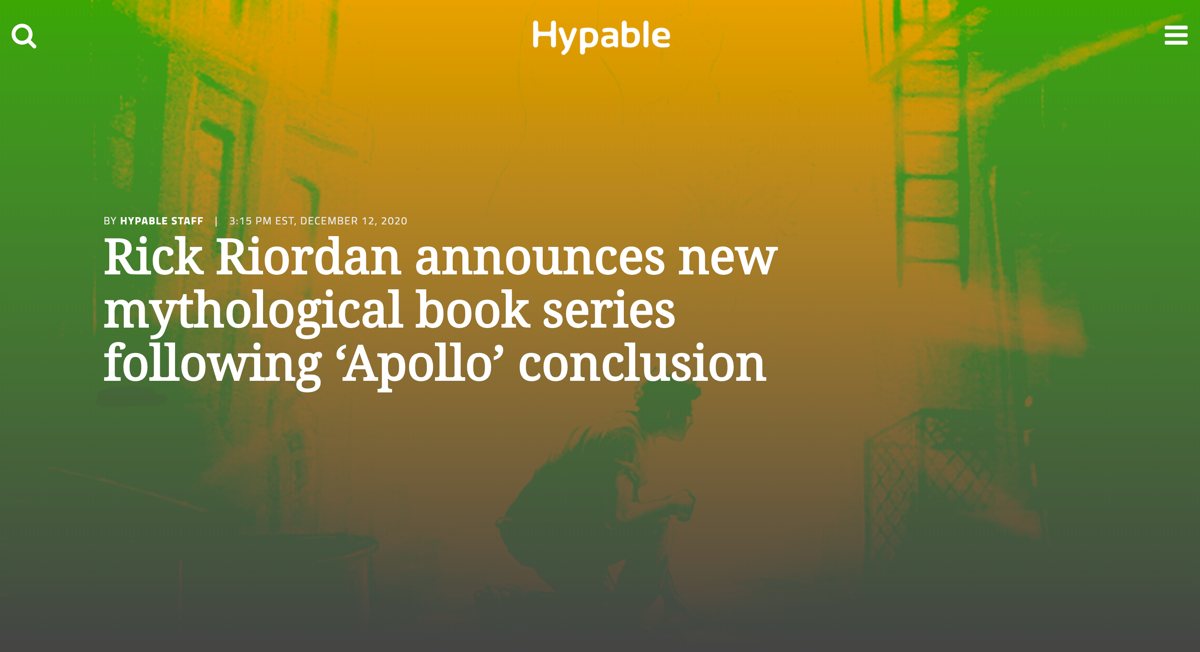 The last book in the Trials of Apollo series by Rick Riordan will be released in Fall 2020, and while I’m excited to finally read The Tower of Nero, I’m also worried about what will come next. Rick has alluded that this is the last book in the Percy Jackson saga (which spans three separate series), which begs the question: What’s next?

Maybe we’ll get more books in either the Kane Chronicles or Magnus Chase and the gods of Asgard worlds (Egyptian and Norse mythology, respectively). It’s true that the Rick Riordan Presents imprint is tackling a lot of awesome new mythological stories, but we’re always going to want Rick to write his own stories. I’m hoping he’ll tackle something new. Or maybe he’ll just be super busy writing a perfect Percy Jackson adaptation series for Disney. — Karen Rought

What fandom headlines are you hoping to see in 2020?