I probably should’ve seen Billy Lynn’s Long Halftime Walk before venturing into Gemini Man in order to better understand and prepare myself for the technology Director Ang Lee would utilize in his latest return to action movies. I viewed the movie in what’s called High Frame Rate (HFR) 3D+, which means it was filmed and is shown in 3D, 120 frames per second, capturing detail that otherwise would be glossed over in a lower frame rate.

The first thing to notice while watching this is that it makes for a bizarre viewing experience. Everything is so crisp and clear, it actually doesn’t enhance realism, but instead, creates weird hyper-realism and makes everything look oddly fake, as if you’re watching a live-action video game. It is comparable to the sensation of watching a TV at home with the motion smoothing effect on, which Tom Cruise famously made a PSA for upon the release of the latest Mission: Impossible. 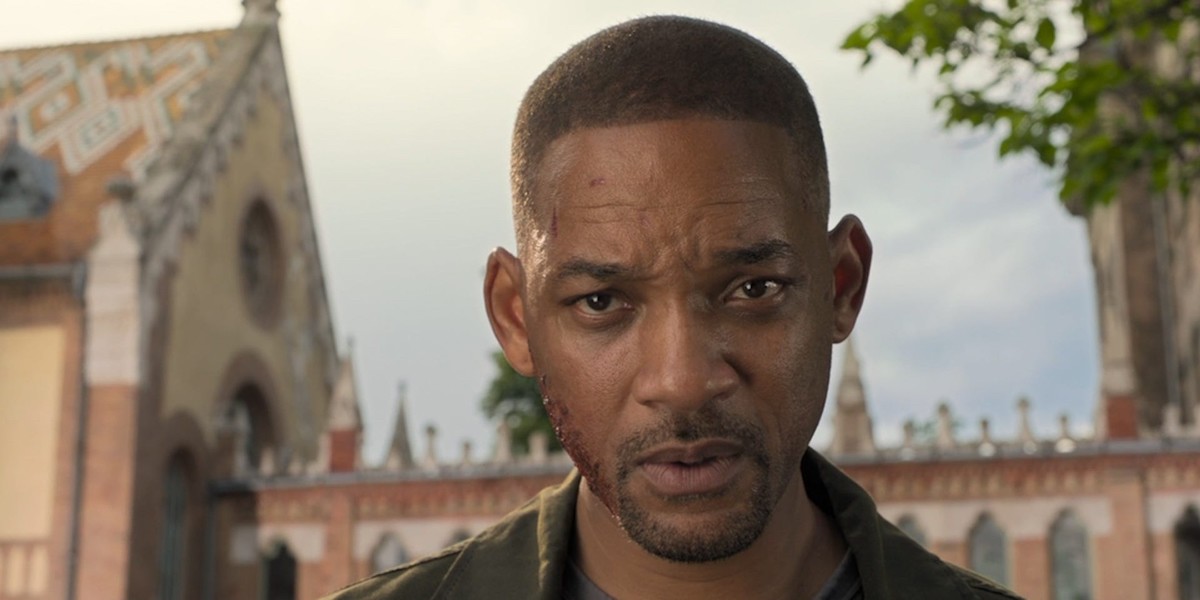 I found myself completely distracted during scenes that take place in the daylight, where it feels like you’re seeing details you probably shouldn’t even be paying attention to. It’s too crystal clear and almost makes the movie look exponentially cheaper than it obviously really is. However, once the action scenes kick in, the digital technology on display really is a sight to behold. Whether it’s positive or negative, I’m still unsure, but it’s definitely something…interesting.

The first action set-piece involves military assassin Henry (Will Smith) being chased by a new, younger, faster assassin who happens to be, well, him. He chases him on a motorcycle, zipping around city streets, weaving in and out of traffic, and the high frame rate really does give you clarity of what would otherwise be a harder-to-follow sequence and puts you inside the action. But again, it feels more like a video game than a movie. I’m not sure if this is the future of cinema, as Ang Lee seems to think it is, but it makes for a singular experience nonetheless.

With Gemini Man, Ang Lee seems to be looking both forward, with embracing this technology, and backward, by having a character face a younger version of himself and his own mortality. Since the Oscar-winning Life of Pi, Lee has been pivoting to a new mode of filmmaking, heralding digital cinema as the future and showcasing these technologies for audiences. It’s just a question of whether the stories he’s telling are actually still interesting.

There’s a lot of potential in the premise of a 51-year-old hitman, who has completed 72 kills in his career and is ready to retire for good, then is forced to come face-to-face with a 23-year-old clone of himself that his government created in order to usher in an era of non-feeling super-soldiers. Unfortunately, the script doesn’t really dig its teeth into this conceit as introspectively as it could and decides, instead, to gloss the surface of plumbing any tricky philosophical or moral questions.

Any supporting characters beyond the digitally de-aged Will Smith are woefully underutilized, including Clive Owen as the snarling baddie, Mary Elizabeth Winstead as the whip-smart fellow operative, and a comedic-relief veteran of the field, played by Benedict Wong. Smith, however, does give a rather captivating performance playing opposite himself as his younger version.

The story isn’t much to discuss, so I’ll keep defaulting back to the action sequences, which for the most part are spectacular to watch; that is, if you’re willing to let the hyper-real artificiality wash over you. The movie looks its best when it’s at night. Thankfully, some of the movie’s best scenes take place in the dark, including a final set-piece with guns blaring in a super market, making products on the shelves pop and spray their contents toward the audience with every bullet hit.

The trend of 2019 really has been de-aging technology, from Samuel L. Jackson in Captain Marvel to Robert De Niro in The Irishman, and now Will Smith in Gemini Man. And for the most part, it works, and it’s really is striking to see, especially in this case: an actor facing off against his younger self. However, we never really see the digitally de-aged Will Smith unobscured in full daylight until the very end, and even there it’s a bit jarring.

The hyper-clarity of the high frame rate technology really does a disservice to the whole picture, unless it’s at night or it’s showcasing an otherwise frenetic action chase sequence. It’s there, and I can see what Ang Lee is talking about, in wanting to utilize these technologies to their peak power.

But when I’m watching two characters deliver bland dialogue, in a bland setting, servicing a bland storyline, then the high frame rate makes me completely aware that nothing interesting is happening on the screen.

‘Gemini Man’ is now in theaters