Halloween themes can sometimes be cheesy if they’re not done well, but luckily that’s not a problem for Grey’s Anatomy season 16. Most of the storylines that were already on going just continued on, except that costumes were added into the mix and there was a bit of a spooky issue at Pac North.

For me, the most interesting part of the episode was what was going on with Alex and his hospital. With the investors coming to look at all the improvements going on, he’s hoping to convince them to give up more money for other things. Which means, he’s in a bit of a grumpy mood and not all that interested in Jo’s Halloween antics.

When he gets to the hospital, Weber helps him show the investors around and for the most part, the tour was going well. But they’re interrupted when the construction workers need to tell Alex about what they found. While digging, they discovered a mass burial grave right where the new construction was supposed to be. Not knowing what to do with the investors there, Alex asks Weber for advice.

At first, Weber says that the best thing to do is to be honest. But when Alex tells him about the mass grave, Weber changes his tune. Apparently the hospital used to be a psychiatric hospital and when patients died without family members, the hospital just…took care of it. So Weber agrees to keep the investors busy while Alex figures it out.

Meanwhile, Jo shows up at the hospital and can’t believe that Alex is still in a bad mood when her costume is so good. He tells her about the graveyard and then suddenly, they have to run off to help Hunt with a bunch of crashing patients, even though Jo doesn’t actually work there. 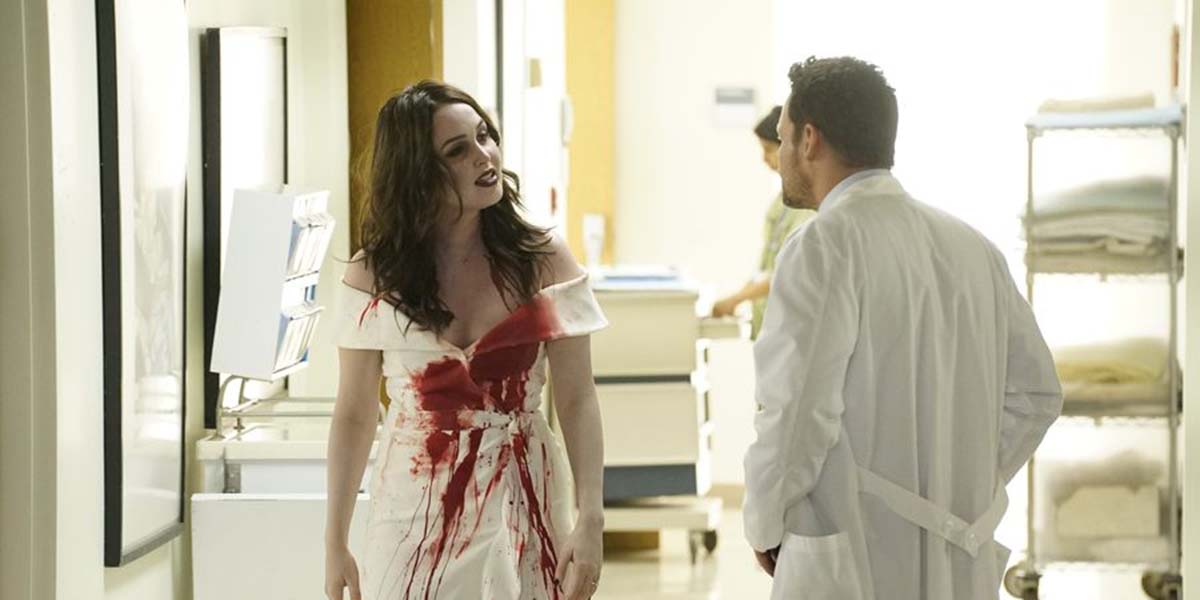 It’s a good thing she showed up though because Jo is able to quickly figure out all the patients had blood transfusions. They find out that Pac North has their own blood supply, so Alex and Hunt go to check it out. Initially it seems like the blood is being stored cool enough, but when they double-check, it’s not where it needs to be and the blood is all bad.

The next issue that Alex has to deal with is all the workers gossiping about the burial ground and how that means that the hospital is haunted. Jo walking around in a spooky costume doesn’t help and Alex ends up loosing his cool. While he’s telling off the gossiping nurses, the investors overhear everything he’s saying, including the part about the bodies.

Somehow that actually helps because the investors are impressed with the way Alex is handling everything. So they agree to give him even more money for the hospital to make it better. With an improved mood, Alex suggests that they go out to celebrate. Celebrate they do, by making their marriage official at the court house, complete with Halloween costumes.

Meredith’s storyline was also quite interesting on Grey’s Anatomy 16×06, though spooky in a completely different way. She’s in jail to serve hours for all the community service that she missed. She’s stuck, worried about her paperwork coming in for her to get to take the kids out for Halloween, and what’s going to happen with her medical license, and her grumpy roommate.

Apparently, she hasn’t learned her lesson though because she starts to offer anyone that might be able to help her some medical help. Though she does get to hear about a different kind of issue apart from the usual health related ones. The other woman in the same cell as her tells Meredith her unfortunate story of how she landed there. 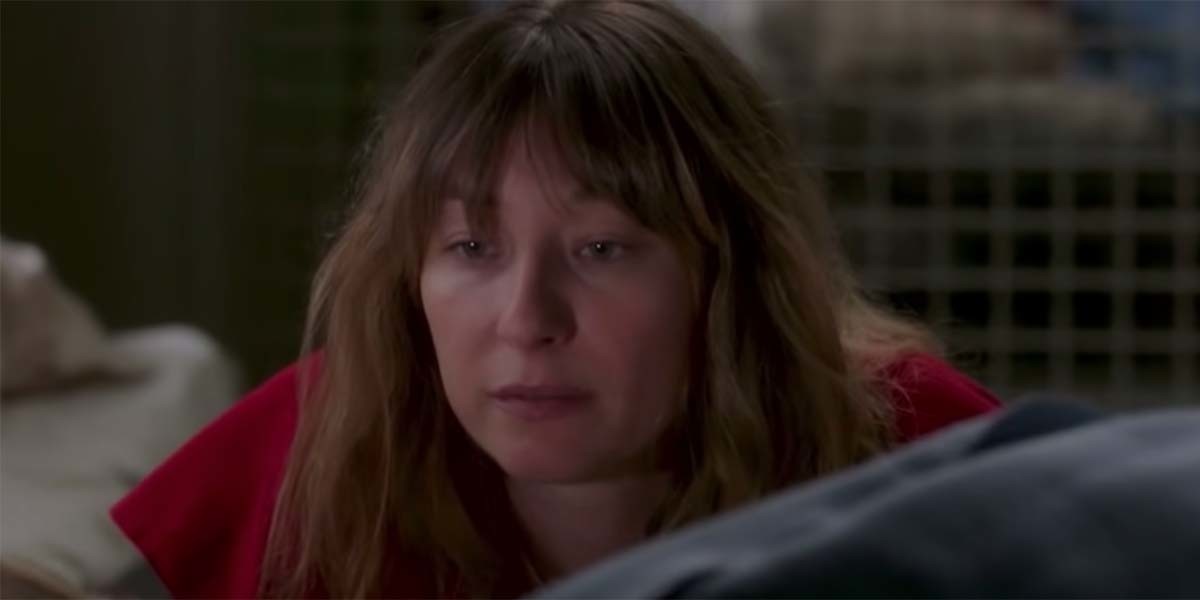 Relying on two jobs to make ends meet, the woman couldn’t miss out on a shift, even when her babysitter left her without any help one night. She put her kids to bed and went to work, but kept going back home on her breaks to check on the kids. When one woke up and was scared, they called 911, and the cops weren’t impressed with her story.

The issue with the police didn’t go well, and the woman ended up getting charged with assaulting the officer when she accidentally hit him while she meant to wave him off. Because she couldn’t afford bail, she was stuck in jail while she waited for her court date and her public defendant wasn’t much help. On the bright side, it was a good wake up call for Meredith that she doesn’t have it as bad as some other people do.

Even when her paperwork does come through to leave, Meredith is already asking her new friends at the jail for a little favor. When she gets home, she is quick to call her lawyer and her former cellmate has her bail posted anonymously not long after that.

Interestingly, DeLuca really stepped up and helped Meredith’s sisters watch the kids while she was gone. Even with everything Meredith said about how they’re at different points in their lives, it doesn’t look that way with how well he handles her kids. Maybe Meredith just isn’t give him the chance to step into a bigger role because she’s scared? 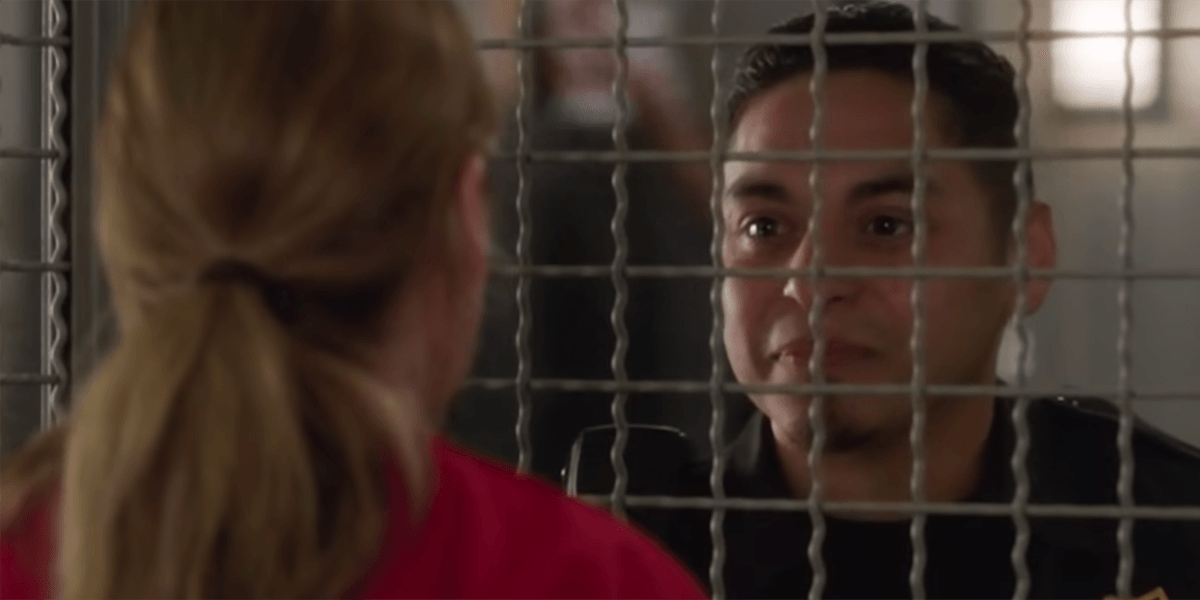 A sort of side storyline on Grey’s Anatomy 16×06 was Amelia meeting Link’s parents for the first time. She’s been relatively calm about the whole pregnancy situation, but when he surprises her by inviting her to meet his parents at lunch, she gets scared. Even though she says that all parents hate her, Amelia still goes to be there with Link to tell his parents about the baby.

Except that the whole lunch doesn’t go quite as they planned. Link’s parents have a surprise of their own; they got back together even though they had hated each other before. Not only are his parents together again but they’re also getting married again. Link is mad, reasonably so, but Amelia is actually good at handling the whole thing. With all her family issues, it doesn’t seem that daunting.

It’s cute to see how well these two are working out together. Despite all of Amelia’s past relationship issues and Link’s personality being completely different from hers, they’re actually a very good couple so far. I’m curious to see where this will go when things get really real, but I’m happy to see them happy for now!

?Pregnant Bailey continues to be cute and funny. I wasn’t sure what it would be like to see her pregnant again but it’s really entertaining so far!

?I’m still worried about Teddy and Hunt’s communication. She continues to worry about being a good mom and even though he’s not doing anything wrong, I wish he was there more for her. It seemed like Tom was always one step ahead of her issues and Hunt is one step behind her. He makes it up to her eventually, but not before she worries a little too much.

?Nico and Schmitt are still winning as the cutest couple on the show right now; too bad we don’t get to see more of it!

What did you think of ‘Whistlin’ Past the Graveyard’?