So, what exactly is an “anti-hate satire?” It’s what writer/director Taika Waititi (Thor: Ragnarok, Hunt for the Wilderpeople) has so proudly labeled his latest movie, Jojo Rabbit, which won the People’s Choice award out of the Toronto Film Festival this year. Now having seen the movie, to me, this label feels like a fail-safe and a cop-out. In case the movie doesn’t quite nail the tone it’s going for — it ultimately doesn’t — then there it is spelled out for audiences. This is a satire!

Although, I would argue that the tone Jojo Rabbit appears to be striving for — a quirky, irreverent, cutesy story about the horrors of WWII from the perspective of a young Nazi going off to bootcamp, like Moonrise Kingdom in the Third Reich — it actually works right off the bat. It’s a bold swing, but the gusto energy and spritely talent of newcomer Roman Griffin Davis, who plays the titular Jojo, brings us into his odd worldview straight away. 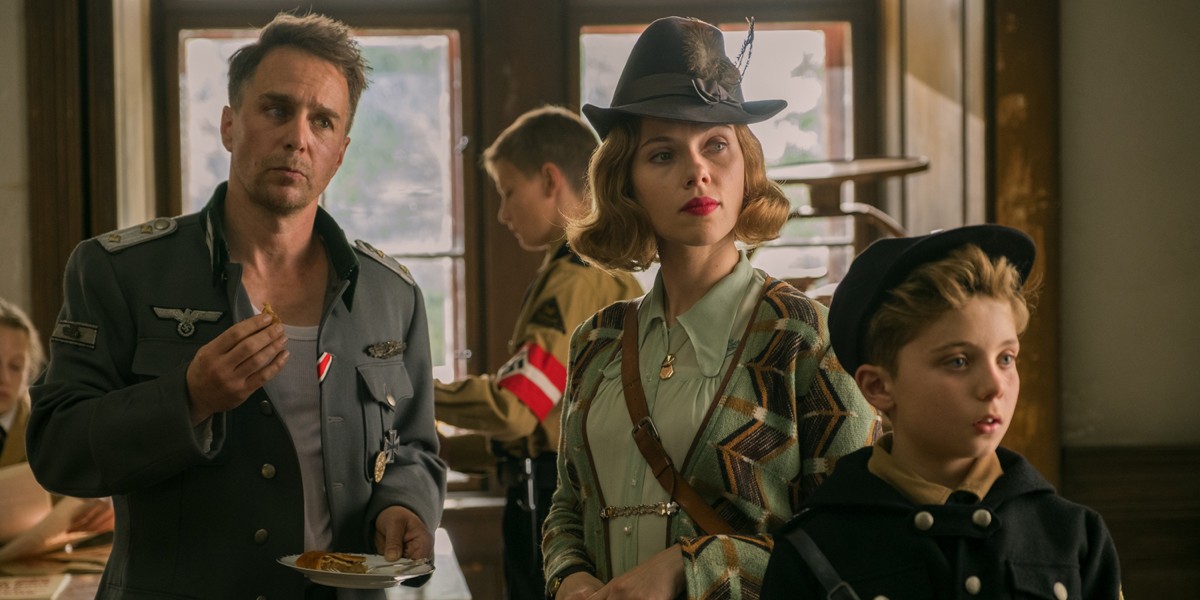 While at Hitler Youth boot camp, we meet Jojo’s imaginary friend, who also happens to be Adolf Hitler; and he’s played by Taika Waititi himself. This idea is fun in theory but very quickly becomes tiresome in execution. It is obvious Waititi is having a ball with it, letting the irony of a Jewish man playing Hitler wash over the audience; or rather, forcing the joke at the audience again and again. This comedic device doesn’t go much further than concept, much like the whimsical, ironic tone initially established fizzles out almost immediately beyond the first few scenes.

Jojo suffers an injury during bootcamp, which renders him unable to enlist and forces him to stay at home with his eccentric, bright and caring mother, Rosie (Scarlett Johansson). While there, he discovers his mom is sheltering a young Jewish girl, Elsa (Thomasin McKenzie), which upends everything Jojo once knew and throws his enthusiastic loyalty to being a Hitler Youth all into question. 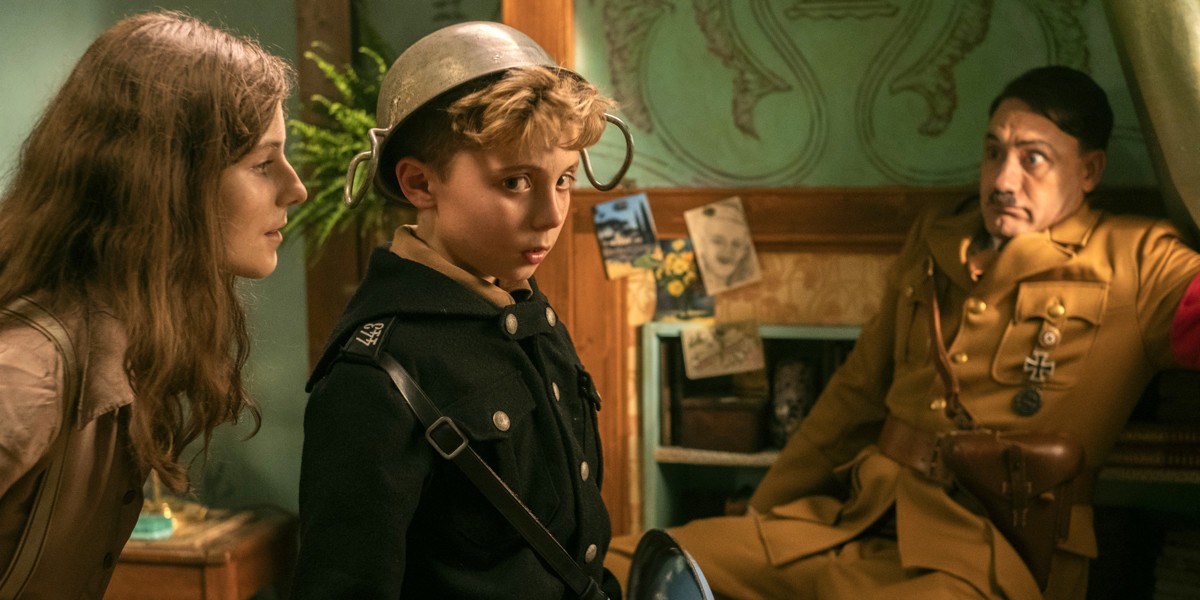 In theory, this is a provocative conceit, from a script written by Waititi and adapted from the 2004 novel Caging Skies by Christine Leunens, but once this element of the movie’s plot is revealed, we can deduce where it’s headed pretty quickly. The young Nazi boy is going to fall for the young Jewish girl. Love conquers hate. When it gets watered down to that most basic element, it all becomes a whole lot less thought-provoking or interesting. Once the dynamic between Jojo and Elsa is established, almost all sense of narrative stakes are erased.

The saving grace is that the scenes between Jojo and Elsa are quite sweet, and the chemistry between Thomasin McKenzie (so good in Leave No Trace) and Roman Griffin Davis is endearing and charming. Scarlett Johansson as Jojo’s mother is also a highlight, with her theatrical personality and effervescent aptitude for dance. In between these tender family scenes, which makes up a large bulk of the movie’s mid-section, here comes Waititi every so often back as imaginary friend Hitler, and you’ll feel like you’re suffering from whiplash.

Jojo Rabbit tries to have it both ways, with the dark comic elements of satire — how ironic to have a coming-of-age story about a Hitler Youth — while mixing it with an actually straightforward, conventional story about a Hitler Youth who falls in love with a Jewish girl his family is hiding. You can’t have something so tongue-in-cheek butting up against something so saccharine. Taika Waititi had to push further one way or the other, and trying to balance it makes both ends cancel each other out, leaving the entire experience as rather inert and inconsequential.

The opening of Jojo Rabbit is strong and lured me in, and for a second I thought the movie could pull off its magic trick, but unfortunately, it pivots to a lazier route and, because of this, later scenes of sincerity end up coming across as disingenuous because of the way the movie began. It’s ironic, too, that arguably Taika Waititi’s weakest film is going to get him awards attention, if the movie does well at the box office and is able to carry its momentum from Toronto into next year.

Jojo Rabbit shares a lot in common with Todd Phillip’s Joker in that regard. Not only its surprise awards attention, but in its intentions. Here are two movies that expected audiences to react strongly to what the filmmakers were serving up, from slapping on the label “anti-hate satire” for Jojo Rabbit to outlandish headlines that Joker was going to incite violence.

It is two movies that are a lot more incendiary in concept than in actual execution. Neither of these movies are creating the type of vehement reaction one might expect because, simply put, the movies aren’t as good or as interesting as they think they are.

‘Jojo Rabbit’ is now in theaters