In an attempt to reinvigorate the holiday romantic comedy, Last Christmas makes a noble effort but sadly falls back onto superficial, familiar territory.

It’s disappointing to see the promising talent in front of and behind the camera on Last Christmas because this largely feels like cheap, recycled holiday entertainment circa 2009. It’s an unfortunate thing to say because the movie is directed by Paul Feig (Bridesmaids) from a script by Emma Thompson (Sense and Sensibility), starring Emilia Clarke in a step out of Khaleesi’s boots and Crazy Rich Asian‘s Henry Golding, charming as ever.

Not for a lack of trying, this feel-good romp through a romantic, snow-dusted London is a bummer of a missed opportunity. Titled Last Christmas, based off the Wham! song, the entire movie is a tribute to the music of George Michael, and should simply be way more effervescent than it turns out to be. There’s also a deceptively clever conceit hidden beneath the surface, which I won’t spoil here, but I will say, some things are a little too obvious. 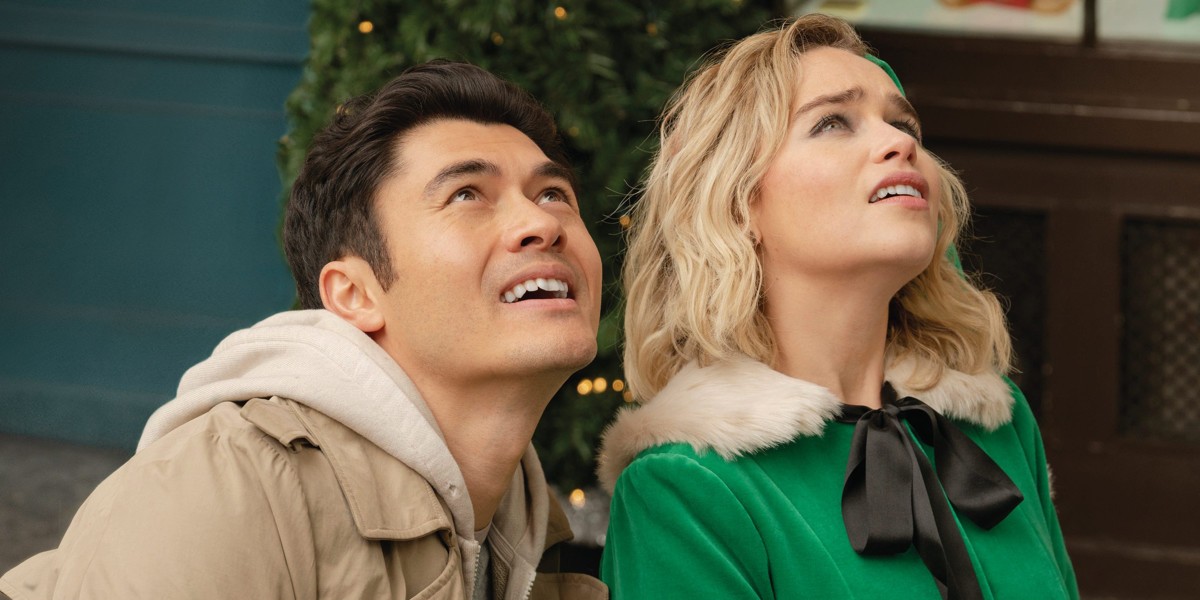 Emilia Clarke plays Kate, a woman down on her luck, trying to make it as a singer but instead spends her days dressed up as an elf working in a year-round Christmas shop. The song “Last Christmas” plays in three different iterations before the movie’s plot even gets underway. Kate is reckless, unmotivated and selfish, exacerbated by her over-bearing mother (played by Emma Thompson) who won’t give her a moment of peace ever since Kate suffered a life-threatening health scare.

Going from one friend’s couch to another, refusing as long as she can to move back in with her parents, Kate idles depressively in place surrounded by oppressive Christmas cheer. There she also disappoints her strict boss, who is affectionately called Santa, and played by the wonderful Michelle Yeoh. Everything changes, however, when the mysterious Tom Webster comes into Kate’s life.

She meets him on a whim standing outside the shop, staring up at something in the sky. His entire motto in life is “Look up,” and it’s something so simple but grows to have great, deeper meaning. He insists on taking her for a walk through the city, imbuing his mantra onto Kate and having her reassess her surroundings and her life. The chemistry between Clarke and Golding is sadly a little labored, but Golding is so good, magnetic and charming on his own right that it almost doesn’t matter.

Kate is at first skeptical of Tom’s wide-eyed optimism and positive view of the world. He volunteers at the homeless shelter, doesn’t use a phone and rides around the city on a bike. He’s whimsical, almost too whimsical. In spite of this, over time, Kate warms up to Tom, but as this happens, he also inexplicably disappears for periods at a time, leaving Kate to fend for herself in the world. This is where Last Christmas is at its most rich, watching Kate return to Tom, claiming how difficult it was to do it without him there.

Due to the nature of the movie’s clever conceit, in its attempt to refresh romantic comedy tropes, it actually does itself a disservice by not being able to ultimately provide a satisfying conclusion. Kate and Tom’s entanglement goes to surprisingly unexpected places, but it’s when Henry Golding is off-screen when the movie suffers, and that happens increasingly as Last Christmas putters along.

Subplots involving Kate’s sister and mother, a shoe-horned side note about immigration, and an inconsequential, albeit amusing, distraction about the love life of Michelle Yeoh’s character all go nowhere fast. Despite all these complaints, Last Christmas is never unpleasant. It’s a bad movie, yes, but it’s serviceable and provides shimmers of pure holiday bliss. Much like the Mamma Mia movies and ABBA, there’s really no limit to the number of times you can hear George Michael songs, so the movie has that going for it. George Michael even provided a new original song, “This Is How,” for the movie.

Once again, without spoiling it, the script takes a leap in trying to provide something unexpected and new within a tried and true formula. Instead of feeling reinvigorated or excited by this, it actually causes a detriment on the simple pleasures of watching two people fall for each other. That’s really the movie I wish Last Christmas would’ve ended up being.

‘Last Christmas’ is now in theaters