I can add one more thing to that “things I’m thankful for” list from last week: I’m freakishly thankful that Legacies season 2, episode 7 is FINALLY here.

After last week’s huge shift back to a world that remembers Hope Mikaelson, Legacies season 2, episode 7 had a lot of work to do. What, with Landon realizing that he still has feelings for Hope now that he remembers her, and how that doesn’t diminish the love he feels for Josie, not really.

Not to mention the Alaric vs. Vardemus of it all and Josie’s descent into dark magic reaching low for a new valley.

All that aside, let’s dive into the episode and see what Legacies season 2, episode 7 had to offer.

That Alaric hug gave me LIFE

While just about every relationship on this show is under fire at the moment, the one that kinda sorta seems to be re-establishing its previously firm foundation is that of Hope and Alaric. He believed her even when he had no memory of her, and now that he remembers everything, he literally reaches out to comfort her.

Considering that just about everyone else is either siding with someone else, avoiding her or hating her, it’s refreshing to know that Alaric Saltzman will truly always be there for Hope Mikaelson. He knows that everything she’s done has been to make everyone else happy.

A Landon for each shoulder

Okay, so let’s talk about SimuLandon. Personally, I loved how outspoken, funny, and giddily honest he was. I mean, don’t get me wrong, there’s a reason that we call it our subconscious after all, but this guy was completely uninhibited in his love for Hope. Maybe it was because he had to deny it before, since her memory had been stolen from him? I wonder what his subconscious would have said if Josie had come up with this plan, say, last episode.

Mostly, though, I found it odd that, despite Landon’s anger at Hope last episode, he doesn’t have anything to say to her. All that fury that she was going to keep herself a secret from him and just let him run off with Josie, and then… nothing. I was anxiously expecting a fight from them, so I can’t say I’m not a little disappointed in our phoenix. Hope was clearly spoiling to have it out with him.

And, not gonna lie, every time SimuLandon said, “I love you” to Hope, I could feel a new scar bloom across the fabric of Hope’s heart. No matter what’s gone down since she escaped Malivore, they had a truly epic love, and now it seems just out of reach. 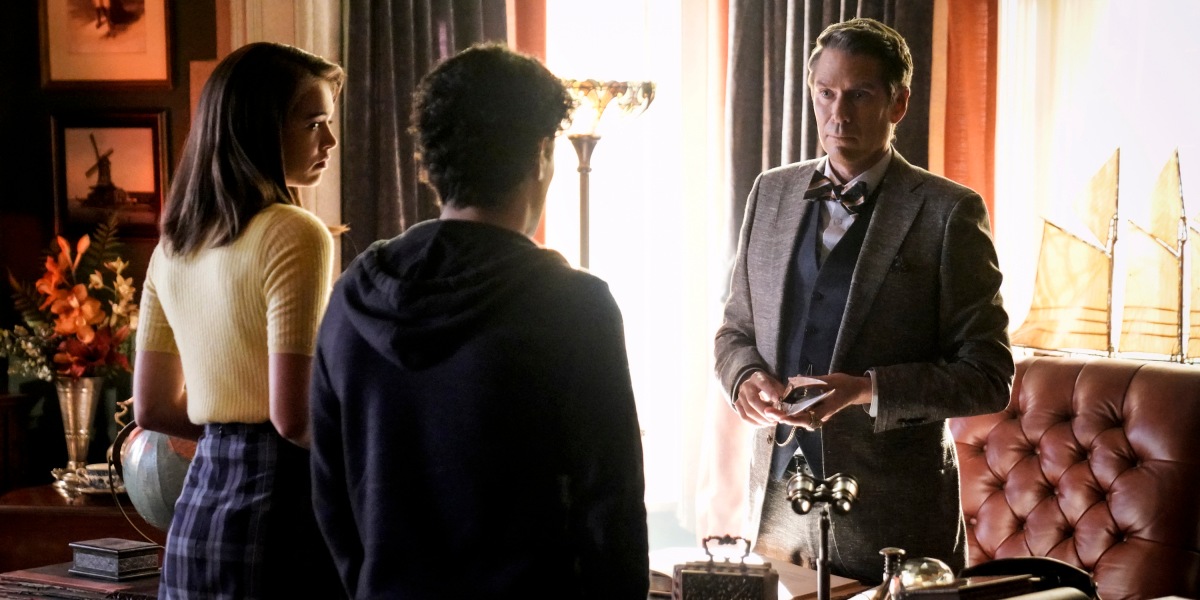 While theoretically her plan to close the Malivore portal seemed like a good one, she wasn’t around for the follow through, which is where Hope Mikaelson, squad leader, always comes through. Not to mention, Josie let her personal issues cloud her mind at the most inopportune moments. There’s a reason that not just anyone can take the super squad into battle and come out victorious.

Not to mention that whole Professor Vardemus thing. I mean, she JUST watched that morning as that very specific trident took Landon’s subconscious and implanted it in another body. What did she think he had planned when he asked her to do a spell on/with it again? She has been blindly following his direction, just hoping that he was truly the headmaster she wanted him to be, without taking any precautions and responsibility for what her magic might be doing in the grand scheme of things.

Not gonna lie, I kinda liked the Sphinx in Legacies season 2, episode 7. While he’s a little over the top for an episode all about the values and consequences of secrets, his truth-telling ability does come in handy. And I love a good riddle as much as the next guy.

It sounds like we haven’t seen the last of this Malivore non-monster. I mean, ultimately, this guy found his freedom and escaped the mindless duty that so many Malivore monsters have fallen victim to. I’m definitely on board to revisit his riddles and mind games, especially if he’s going to give us great riddles to puzzle out like the one he gave us last night. We have to do something over the winter hiatus.

Sisterhood of the traveling prism

It started out as Lizzie’s tool to help her focus her arguments with per parents, but pretty soon, the prism moved on to be in Hope’s possession. Hope used to have long talks with the Landon in her head who chose to act on feelings with another girl while she was rotting away in Malivore. Now, Hope has passed it on to Josie, who needs to see, hear, and feel near to Landon right now.

You know, I kinda like this little circle of subconscious needs. I hope that the prism continues to be a talisman for them to share as they each find times that they need to think long and hard about how to handle the stresses of teenage supernaturaldom. It better not be destroyed just because it’s in SimuLandon.

I’ve started to get a little frustrated with both Raf and his storyline this season.

Let’s start with the character. In Legacies season 2, episode 7, Raf insists that being around Hope is too painful because of his feelings for her. I’m not about to tell him what to do with unrequited love, but maybe he can see that she needs his friendship right now, not his guilt-trip? Raf is a good guy, and he’s always trying to do the right thing, but Hope is his friend, too. It would be nice if he’d want to fight as hard for her friendship as he does the brotherhood he and Landon share.

As to his storyline, I can’t wait for him to get something truly complicated to work with that doesn’t involve his feelings for Hope. I long for a future episode/story arc/season where Hope and Raf are the best of friends, where any romantic leanings have been tucked safely away for future Raf and Hope to deal with, and where they can count on each other in the face of just about anything. I love their friendship, and I am desperate to get back to that.

All that said, I LOVED his scene with Landon on the dock in tonight’s episode. I feel like we haven’t seen that side of Raf before, and it’s definitely one of Peyton’s best scenes to date. He got some information from the Sphinx, and now he’s desperate to talk Landon into saving himself.

This isn’t the last of Vardemus, right?! 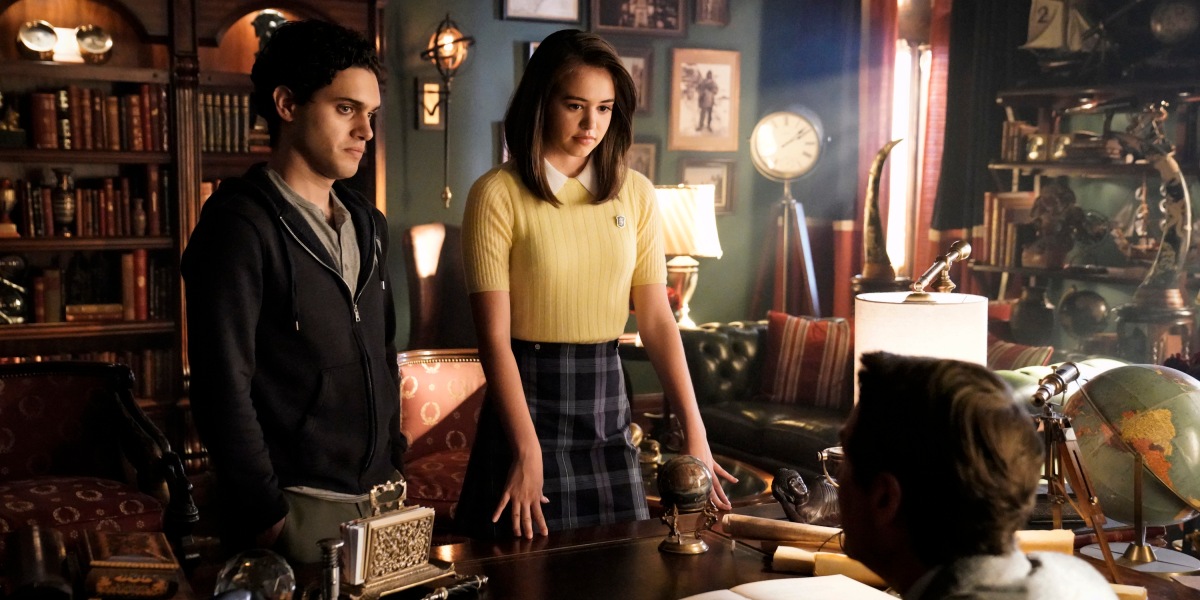 I’m a little disappointed that we didn’t get to see more of Alexis Denisof as Vardemus. I mean, he and Alaric had a lot of great, strong, tension building toward a promising showdown, and then poof! We know that Clark was impersonating Vardemus, so maybe, somewhere, the real Vardemus is still alive, and still wants to be headmaster? I’m not sure that Alaric is ready to move back into the Salvatore School Headmaster’s office, so I’ll just keep my fingers crossed over here.

Possibly my absolute favorite moment of the entire episode is when SimuLandon asks to hold Hope’s hand until Lizzie comes to take him to the Sphinx. I mean, they’re HANDon for crying out loud. I want hand-holding to be their ‘thing.’ I want them to always walk into bad situations holding hands and supporting each other.

While Agent Clark is a pain in the ass, I really love the antagonistic energy Nick Fink brings to Legacies. While Malivore is the real baddie, Clark is a terrifying opponent all by himself. And while his body was nabbed by the Red Cloaks, I really hope his consciousness will be saved, too. Just so he and Hope can continue squaring off like they do so well.

Starting with a couple of iconic movie references from The Shining and Jurassic Park, this episode had some really fun Easter eggs in it from the TVD Universe, too. Starting with a glimpse at those magic-stifling cuffs that we saw used a time or two in TVD, and ending with one of TVD‘s most iconic lines. That “Hello, Brother” had the same energy that Damon’s did when he first greeted Stefan.

Let’s talk about that Hosie scene

While I don’t actively ship them, I don’t actively NOT ship them either. I am hoping that if Hope and Josie are meant to be, that it will be a long, slow burn to their happily ever after. So, scenes like that one in Josie’s room are EXACTLY what I love to see.

Their friendship, their bond forged by loving the same boy, their crushes on each other, it all merges to form this huge possibility. And that can only be realized by them getting closer and closer. It reminds me of how the show skillfully built Damon and Elena from enemies to friends and, eventually, to lovers. If that’s how Hosie ends up, I will definitely not be disappointed.

I know that Kaleb will be back next week thanks to those episode stills, but it kills me that neither of them appeared in this one. I always look forward to their snark and brotherhood, so when we see them reunited after the winter hiatus, I’m expecting some truly classic scenes for them. And maybe some monster slaying. Let them save the day for once.

Oracles are trouble and so are their prophecies

We got a bunch of fun riddles in Legacies season 2, episode 7. Some easy, some not so. And then there’s that final one. Here’s that last riddle the Sphinx left Alaric and Dorian with. Let’s see how much we can unriddle before it all comes to light.

“There are two prisoners. One is the master of his cage, the other returns home without power.
The sins of the father are visited upon the daughters here and not here.
A new hero rises, but can be felled by the golden arrow.
The wolf among you has many faces.
When time fractures, darkness overwhelms.
But the greatest destroyer of all is love.

We get one more episode before Legacies goes on winter break, so get yourselves ready for all things Christmas with next week’s Krampus/Santa-themed episode! (And maybe we’ll get a hint at who’s underneath those red cloaks? Maybe?! **crosses fingers**)