In Hulu’s Looking for Alaska episode 5, we finally understand why Alaska behaves the way she does, and meet Takumi the fox.

Much of Looking for Alaska episode 5 doesn’t happen in the book. In the novel, the Colonel and Alaska never have a major fallout like this, there’s never an Ugly Sweater Dance, Miles never makes this intense of an effort to stay away from Alaska, and Lara isn’t this awesome.

But weaved into all these new plotlines are scenes and dialogue taken straight from the novel, so it doesn’t feel entirely foreign… and in a way, it makes the overall story work in a much more satisfying way for the screen. 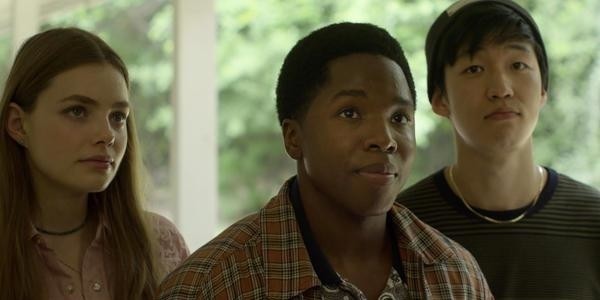 Things have gone downhill since Thanksgiving in episode 4, and everyone is at odds with each other. The Colonel has broken off his friendship with Alaska, even though that means no cigarettes, and though Miles feels conflicted, he ultimately sticks to Takumi and the Colonel. Alaska Young can take care of herself, he tells himself.

Meanwhile, Sara has moved on, and she’s now dating Longwell. Or is it Kevin? I have to confess that I can’t tell who is who. This new relationship is probably much happier since only one of them is constantly conflictive… but oh, Sara, couldn’t you do better than this?

And now, a Culver Creek announcement: The Ugly Sweater Dance is days away! Miles decides to ask Lara to go with him, and he clearly expects an immediate yes.

But Lara has also moved on, and she’s going to make it harder for him this time. He’s going to have to put some real energy in if he wants to win her heart, instead of making Alaska do all the work for him and then running off! It’s only fair. But it’s obvious that Lara does still like him… so if Miles plays his cards right, he can definitely win her back. 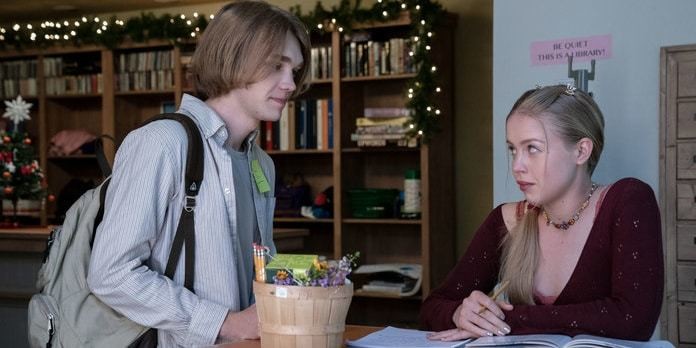 Everyone knows that the Weekday Warriors are planning something big for Alaska, but the Colonel has chosen to remove himself from the situation. Miles, meanwhile, sits around guilt-tripping him but not doing anything himself, which leads the Colonel to stomp out of their dorm like an angry grandma and fall asleep in the yard.

The next morning, Alaska wakes up to discover that the Weekday Warriors have flooded her room, and destroyed her life’s library — including the Gabriel Garcia Marquez book that talks about the labyrinth of suffering.

Like with the destruction of the Colonel’s suit, I want to think that the Weekday Warriors didn’t know how important the library was to Alaska. But they probably did: After all, if they did something so cruel to the Colonel without knowing for sure that it was him, they would definitely do something even worse to Alaska knowing it was her.

And just like that, the Colonel and Takumi get drawn back in. But it takes Miles a little longer. He wants to focus on Lara right now. 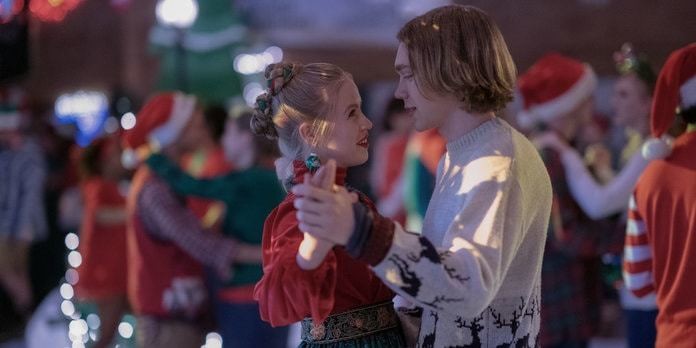 The dance and the plan

The revenge prank, in steps:

Step 1: Make copies of the Weekday Warriors’ keys. (Meanwhile, Miles makes Lara a study starter pack which is EVERYTHING. He’s doing a wonderfully!)

Step 2: Learn the Weekday Warriors’ laptop passwords. (Miles wants to cook Lara a Romanian meal, but gives her a bufriedo instead, and she finally agrees to go to the dance with him.)

Step 3: Tell the Eagle that the Colonel, Takumi and Alaska are all going to the Colonel’s for the weekend… and have the Colonel’s mother cover for them. I really hope she isn’t expecting them.

Step 4: Persuade Miles to be the lookout during the dance, despite his vow to remain disconnected from the prank. Of course, the Colonel succeeds in persuading him, but Miles intends to hide this from Lara completely.

Step 5: Break into the Weekday Warriors’ rooms and log into their laptops. Write essays on their behalf referencing the diarrhea incident and send them to Duke.

Alaska assumes that because the Weekday Warriors are rich and powerful, they will be unharmed by the incident (not counting their pride). The Colonel and Alaska have a moment where things almost feel normal again.

Miles, meanwhile, tries to be an awesome date to the dance… while also refusing to dance. Can we teach people to dance in high school so that this isn’t a thing? Or at least make it socially unacceptable to invite someone to a dance and then refuse to dance?

For the first time, the Eagle is at the dance, in an attempt to heal his broken heart after his tragic divorce (this guy really makes you feel bad for him). He gets closer to the French teacher, proving that the Eagle has game — and that maybe there’s hope for these two chaperones together.

Miles agrees to dance to “Macarena,” but then gets distracted by the prank. Lara gets understandably upset, and Miles invites her to dance to “Fix You,” but he ruins it again, pulling her along on his lookout mission when he sees the Eagle (who is also ruining his own date) chase after Longwell and Sara… who almost end up in his room, where they would find the Colonel and Alaska!

But Sara has a special place in mind (see: a place she and the Colonel used to go to.)

This sends the Colonel into a rage, leaving Takumi to write essays with Alaska. And when Miles and Lara burst in, warning them that the Eagle is almost there, Lara gets fully pulled into the prank. She takes over for Takumi… and I finally get my “no one can catch the motherfucking fox” moment (the one we’ve all been waiting for)!

They set off fireworks and run away… but they forget about the swan, and Miles gets bitten in the butt, in what’s one of the best scenes of the novel and now of the show. Lara, meanwhile, is a natural at writing poop-related essays. It’s a win all around. Well, except for the Colonel, who now knows his ex is sleeping with Longwell in their spot.

Lara also claims her territory, telling Alaska that she likes Miles and he likes her. “I am good for him.” It’s polite, but it’s pointed, and Alaska knows exactly what she’s saying. It’s time for her to put a stop to the games. 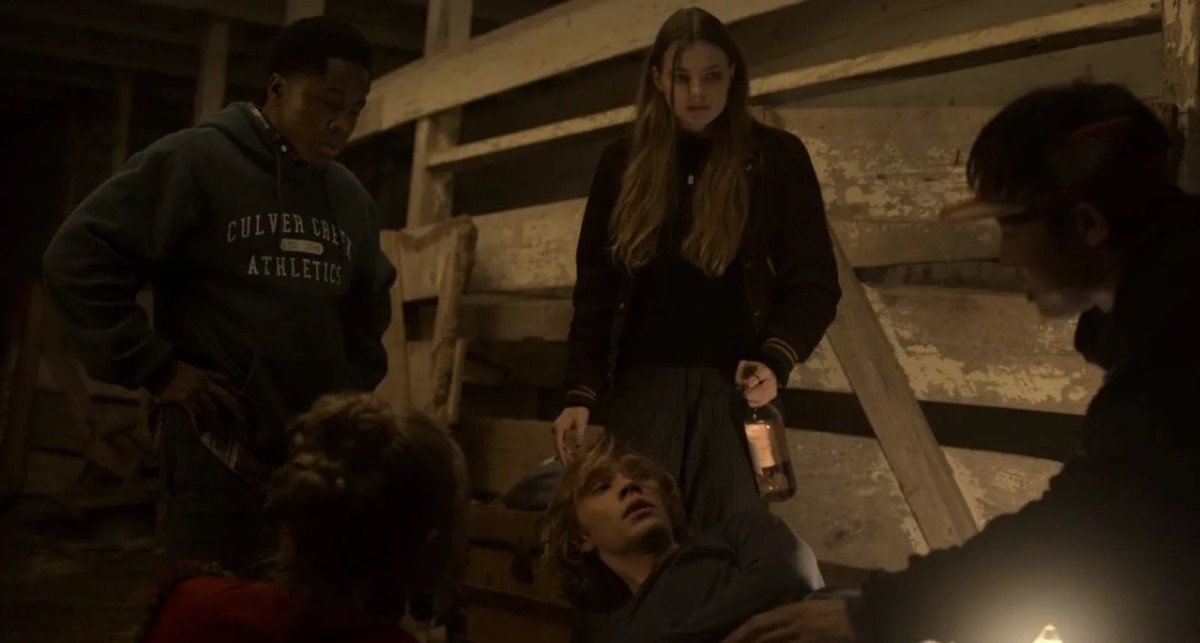 The gang gets together in the barn, and Miles has the oh-so-pleasant experience of having his friends assess his mangled butt. “No, Lara, don’t look! That’s not date appropriate!” Still, Lara fits in very well with the group. She’s funny, honest, open-minded and genuinely likes Miles. The prank has only served to bring them closer together.

And maybe Alaska isn’t so happy about that, because she seems to be constantly calling everyone’s attention to herself.

She proposes they play “Best Day, Worst Day.” The Colonel, we learn, only wants to make his mother happy. Lara is still grieving for the life she left behind in Romania. And Alaska has the worst story ever: how her mother died in front of her and she did nothing.

This is as major a moment in Looking for Alaska episode 5 as it is in the book. But in the show, the fact that Alaska suggests the game seems a lot more irrational. Why would you suggest that game if your story is clearly going to be the worst one? Why turn this moment into a profoundly emotional one, where everyone can witness your pain?

Looking for Alaska episode 5 does a great job of showing Alaska’s inner conflict and intense desire to be at the center of everyone’s attention, as well as the pain behind her erratic behavior. She lost both her parents that day, and so she hates the idea of being abandoned, of being forgotten. She craves adoration from others even as she hates herself.

This scene also shows how Miles is still wildly susceptible to his own desire to “fix” Alaska, running after her to give her comfort and leaving Lara behind in the barn. Away from everyone else, Alaska seems surprised that Miles will still talk to her now that he knows that part of her story. She seems to care about his reaction more than anyone else’s. But when she asks why he stayed, he answers: “Because I’m your friend.”

Alaska walks away, he comes back to Lara (who actually seems surprised that he came back!) and they kiss for the first time. Alaska lies nearby, awake in the dark.

By the end of Looking for Alaska episode 5, things seem to have smoothed themselves out somewhat… but of course that can’t last. We’re only a week “before.”