Nancy Drew season 1, episode 5, “The Case of the Wayward Spirit,” just finished airing, and Tiffany definitely made her presence known. Read our review!

This episode of Nancy Drew really brought the supernatural to the forefront of the series. I know Nancy had been pretty much on board with the idea that ghosts exist for at least an episode or two, but I feel like “The Case of the Wayward Spirit” cemented this as the truth.

I have a feeling that even though Nancy won’t fight Bess on this front as much, she’s definitely still the kind of person who will look for a logical, reasonable explanation first. And I’m glad. As much as I love the supernatural aspect of the show, I want it to be as grounded in reality as possible.

The real highlight of the episode was Leah Lewis’ acting. You could tell the difference between Tiffany and George just by the way she held herself, and that is the mark of a great actor.

Related: Nancy Drew season 1, episode 4 review: You can’t be afraid of the truth

Tiffany’s story, especially in this episode, is absolutely devastating, and Lewis displayed a whole range of emotions — from fear to anger to heartbreak — at the drop of a hat to ensure the portrayal was full of terror and anguish.

As a side note, Nancy Drew is also freaking hilarious. It’s pretty action-packed and mysterious most of the time, even bordering on horror, but there were some lines in this episode that made me cackle. The writers sure know how to deliver a balanced hour of television, and I can’t wait to see more.

But let’s stop wasting time and get into the detail’s of this week’s episode.

At the top of the episode, we see a possessed George visit Ryan while he’s asleep. She takes a straightedge razor and cuts her own finger, writing “I KNOW” in blood on his mirror. But by the following day, she doesn’t remember any of it (though it’s not hard for her to put two and two together). 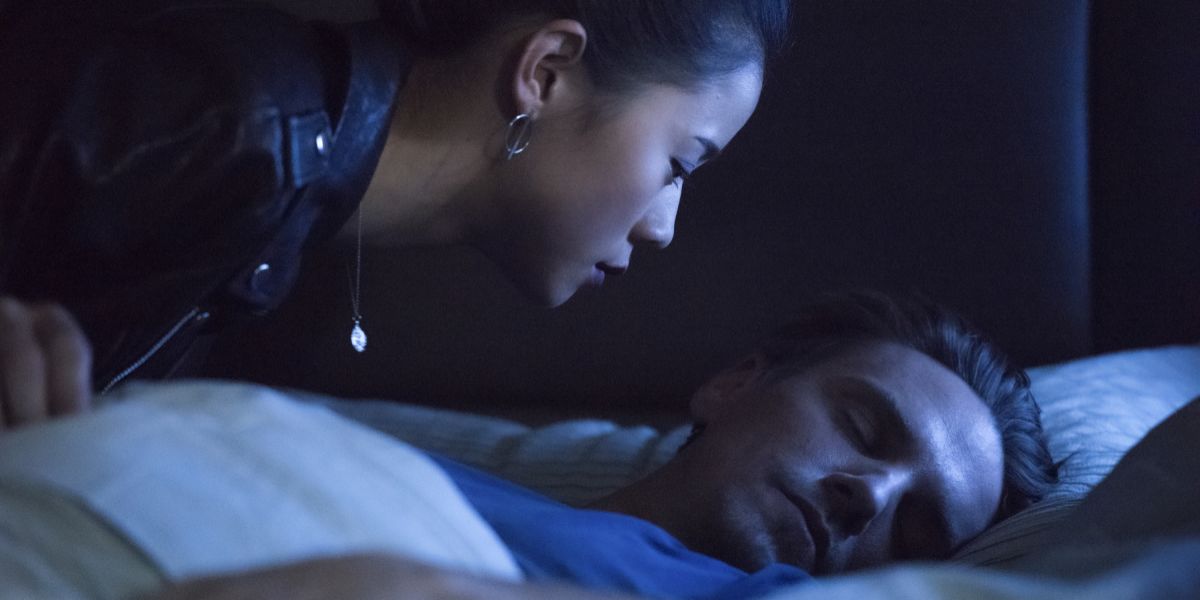 “Ghosts are great for business,” Ace says. “It’s the murder that kills you.”

It’s very hard for me not to turn every week’s review into an Ace appreciation post because he deserves it. He seems like such a sweet guy who probably did something dumb that landed him in his current situation.

I love his interactions with Laura because even though she’s got him wrapped around her finger, it’s not manipulative. They genuinely have deep feelings for each other, and he can’t help himself around her. It’s absolutely adorable and makes me want the best for him.

But there’s no time to dwell on Ace because a devastatingly handsome man enters The Claw and asks if they’ll cater Tiffany’s gala. The irony isn’t lost on anyway, but George agrees because, you know, she likes money.

Handsome Man™ is relieved and grateful and even though I knew there was more to him than initially meets the eye, I didn’t care. He was very nice to look at.

Bess (who’s back to her American accent, by the way) filled Ace in on what happened at the funeral (“We’re platanchors now. She tells me things. When you’re not around.”), and in his trademark manner, he just accepts it and moves forward.

But one person who clearly hasn’t moved forward is Tiffany, who is possessing George’s body and scratching out her face in all her photos. Looks like it’s time to bring in the big guns again.

I was excited for this episode because I knew we would be getting more backstory on George, and Nancy Drew season 1, episode 5 did not disappoint. We learn that George has several little sisters (who all have different dads that didn’t stick around) and that she’s the breadwinner for the whole family.

It puts her attitude about work into perspective, doesn’t it?

George’s relationship with her mother is complicated. We know Victoria is a drunk and probably has trouble holding down a job. George is responsible for her family, including her little sisters. She must feel an incredible amount of pressure in addition to feeling bitter toward her mother.

Her mother, in turn, probably sees George as young and irresponsible (especially after her confession about the affair), but also heavily relies on her.

I don’t think George hates her mother, but I do think she’s resigned to her lot in life, which is too bad for someone so young. The fact that they’re also Asian Americans undoubtedly affects this dynamic. Like I said — complicated.

(Side note: I love that they’re incorporating Chinese culture into the show between the tea, the food, and the ritual at the end of this episode, where Victoria speaks Chinese. I would love to see more, but I’ve appreciated what we’ve gotten so far.)

Victoria tells the girls that Tiffany is sapping George’s life force. If they don’t remove her from George’s body soon, then Tiffany will take up permanent residence. This is obviously not good news for everyone on Team George. Victoria gives her daughter some tea and promises to call her aunties in China who will be able to help her remove the spirit from her daughter’s body.

“Don’t you dare touch that! She’s saving it for BTS.” — George

Despite the fact that George is supposed to be remaining calm to keep from turning into Tiffany, the group gears up to cater the gala. We meet Handsome Man™ again and learn that his name is Owen. We also learn that Nick is jealous, and even though I’m not usually one for love triangles, I’m living for this energy right now.

Owen has a ton of chemistry with Nancy, and even though I’m pretty sure she feels it, I also think she’s more interested in what he can do FOR her instead of what he can do TO her. Nick probably doesn’t have anything to worry about, but I have to admit that I like seeing him jealous. He’s worn his heart on his sleeve since the beginning, and I never want that to stop. 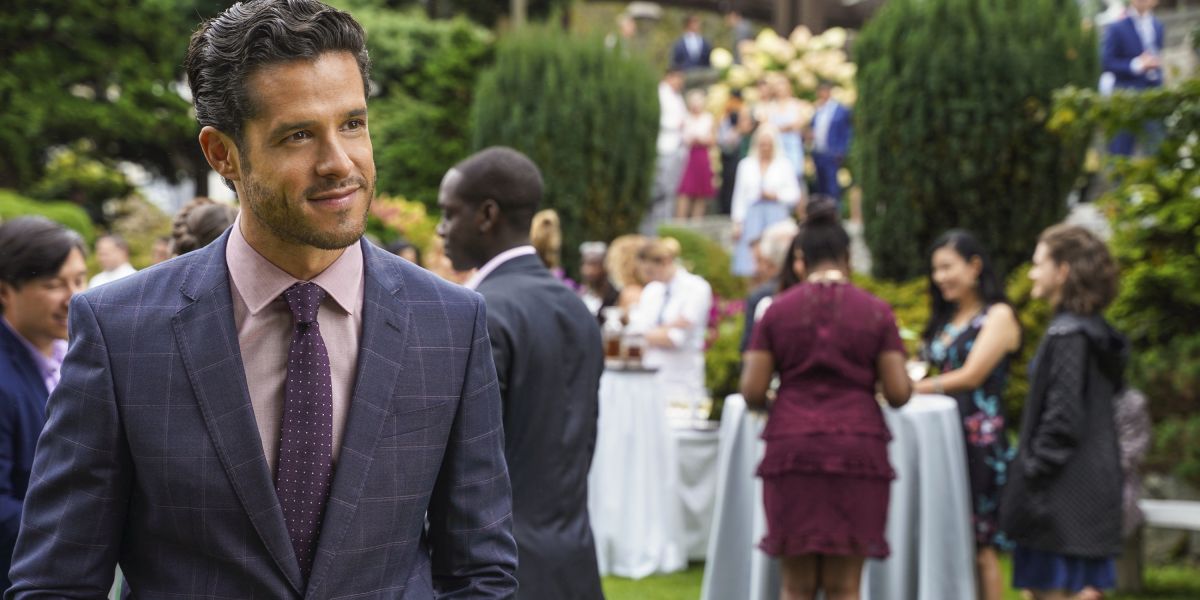 But there’s very little time to dwell on this because Nancy needs to keep an eye on George. Unfortunately, she gets distracted by a big pile of dirt in the yard. Beneath the surface, there’s a buried dress, and a hand reaches up to grab Nancy — who snaps out of it when she bumps into Karen.

Thankfully, Nancy confronts Karen about the picture she found of her and Lucy in the high school rather than letting it sit. Karen admits that she lied because she felt guilty. The two of them used to be best friends, but after attending an exclusive underground party, Lucy started pulling away from everyone. A year later, she turned up dead.

I have a feeling that the series is going to reveal that Lucy was raped (perhaps by Ryan?) at the party. And while this is, unfortunately, a realistic storyline, even (or, maybe, especially) in 2019, I have to admit it’s a tired trope. Is Nancy Drew using this because it’s an easy thread to follow, or do they have something to say?

I hope it’s the latter, and I’ll wait until the reveal before I dismiss their attempts completely.

We get a lot of small reveals in the middle of this Nancy Drew season 1, episode 5. Owen is a Marvin. Ace knows about the bearer bonds. Laura is filled in on the entire situation. Tiffany was collecting information to take down the Hudsons. The flash drive contains a link to a site that’s password protected. Ryan lost hundreds of millions of dollars and Owen won’t do business with him.

Oh, and Lisbeth (who’s a driver for the Hudsons) is still definitely interested in Bess.

When George sees Ryan, Tiffany once again takes over her body and everyone’s worst nightmare comes true. Nancy intervenes and asks Tiffany about her death, but this just sends Tiffany into a spiral. She calms down when she sees Nick, but unlike the rest of the group, Laura is willing to risk George’s life to have a few more minutes with her sister.

Tiffany escapes, hellbent on finding Ryan and telling him she knows, but I have to wonder what, exactly, she knows. Is it just Tiffany, or could she also be implying she knows about Ryan’s history with Lucy Sable?

Unfortunately, we don’t get to find out. Nick convinces Tiffany to save George by exiting her body. Victoria and the others are there to send her away, but not before she has a few choice words for Nick: “Keep Laura safe. Dantes. Remember me.” 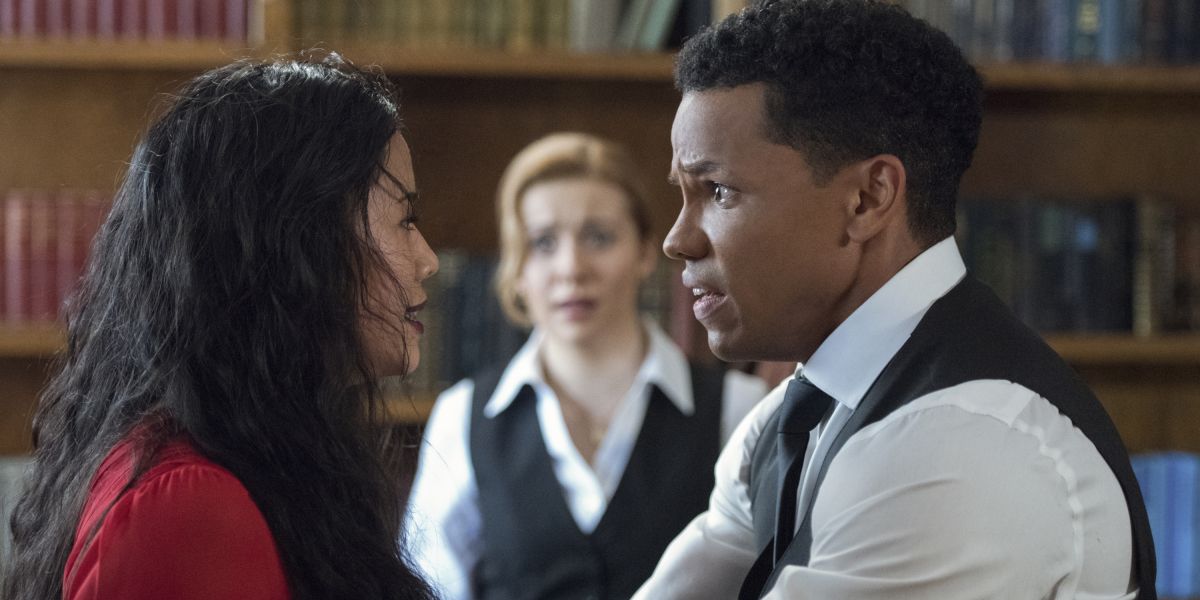 Dantes, of course, refers to Dante’s Inferno, which is the first book she ever gave Nick. After Laura hands over the flash drive, Nick and Ace crack it open to discover that Tiffany has dozens of documents on Ryan and the Hudson family — some of which were signed by Owen Marvin.

I’m not sure of the implications just yet, but I know it can’t be good.

Worse yet is that Nancy enlists Owen’s help to dig up the time capsule that Karen and Lucy buried. He’s still hot as hell, but now that we know he’s a little more involved in the mystery than we initially thought, I have red flags popping up everywhere.

Luckily, Nancy makes it home without incident. When she opens up her computer and pops in a DVD labeled Messages From the Past, it glitches until Nancy realizes Lucy is trying to point out a moment where it shows that she and Ryan clearly know each other.