On Supergirl season 5, episode 3, a new alien parasite is killing National City’s residents, while Lena continues to push forward her plan for humanity, using Kara’s abilities to help her achieve the otherwise unachievable.

On Supergirl season 5, episode 3, Lena goes further down the rabbit hole as she begins to think of ways to use Supergirl to reach her goal of totally resetting humanity. Elsewhere, Kelly’s job puts her at risk as Malefic attempts to use her to help him reach his full potential once more.

Whereas Supergirl season 5, episode 2 felt a little lackluster to me, this episode was quite entertaining and very well-done, feeling like part two of the previous episode. Most of the unresolved stories from the previous episode continued over to this hour, providing the resolution we needed. 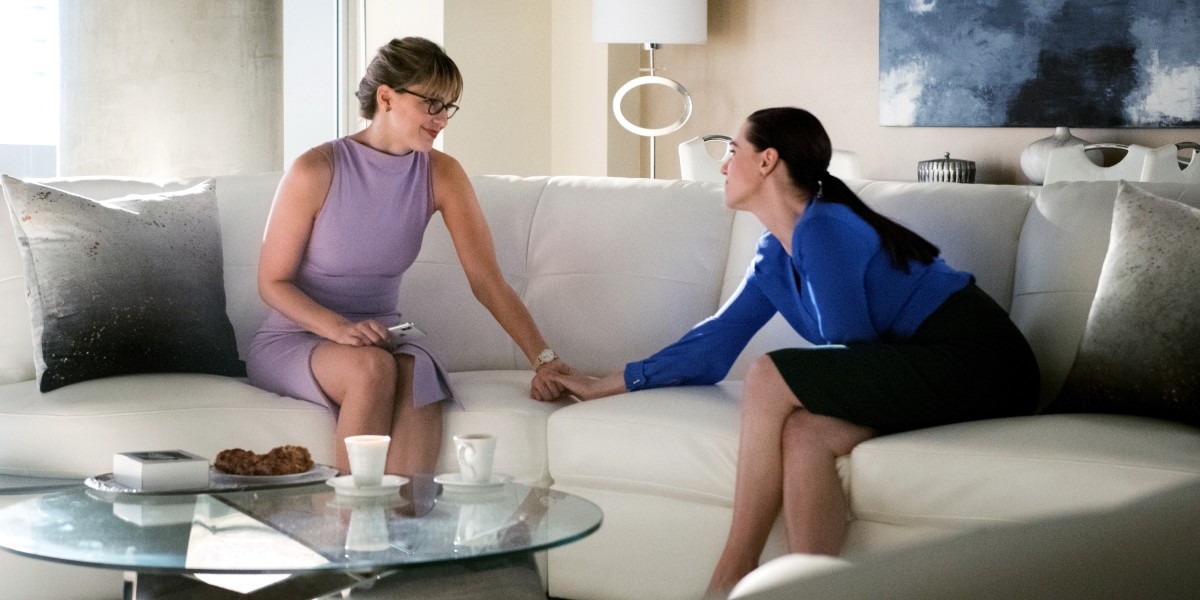 The relationship between Kara and Lena is going to be completely destroyed when Kara realizes what Lena is doing, how she really feels about Kara’s secret, and what Lena has done to use her for her nefarious plans. Kara’s going to be heartbroken, just as Lena felt when Lex revealed the big secret to her and destroyed how she saw her chosen family.

It’s completely shocking, to me, that Kara actually followed through on her promise and stole Lex’s journals for Lena, effectively breaking the law for her. I mean, it’s not shocking that Kara would do everything possible for the people she loves, but I really didn’t think she would follow through. As the title of the episode suggests — “Blurred Lines” — it’s clear that lines are being or have been crossed around the board, not just between Lena and Kara, though their examples are the most prominent.

Despite all of this, I don’t think Lena is completely gone. She’s clearly doing what she thinks is best for humanity, as she’s been shaped and her mind is clouded by all of the betrayal and trauma she’s experienced throughout her life. She’s in pain, and she’s grieving in the wrong ways, giving into the things she would normally know and acknowledge are entirely wrong, like taking away Eve’s agency and taking over her body. No matter how awful Eve was as a human being, she didn’t deserve to have Hope take over and sideline her.

However, if things go much further, how can Kara reasonably bring Lena back from this? If Lena hurts someone else, in a much worse way, she’ll cross a line that she can never truly come back from. At least Eve and Lex were awful human beings and dangerous to humanity if left unchecked, but Lena’s mission is going to impact innocent bystanders if and when the time comes, and she’ll need to be stopped before that. Here’s hoping the writers don’t take this story too far and they’re able to repair the relationship between Kara and Lena before she’s too far gone. 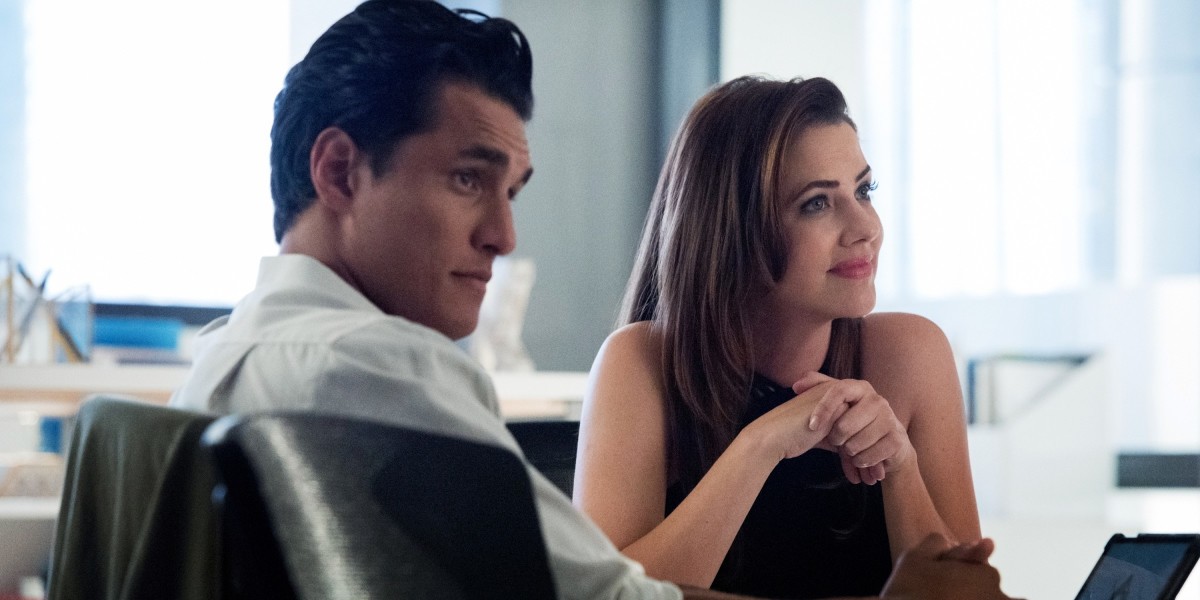 My one complaint about Supergirl season 5 would be William Dey. Staz Nair is giving a great performance with the material he’s being given, but I just do not care about this rivalry between Kara and William at CatCo. After winning the Pulitzer, Kara Danvers should be on top of the world. It was bad enough to have Andrea come in and ruin the excitement, but William is just completely unbearable at this point.

Maybe his sneaky backstory will make him a bit more interesting, but until then, I’d prefer to see less of this conflict. I’m going to continue to give him a shot to impress me, but three episodes in, I could do without him. 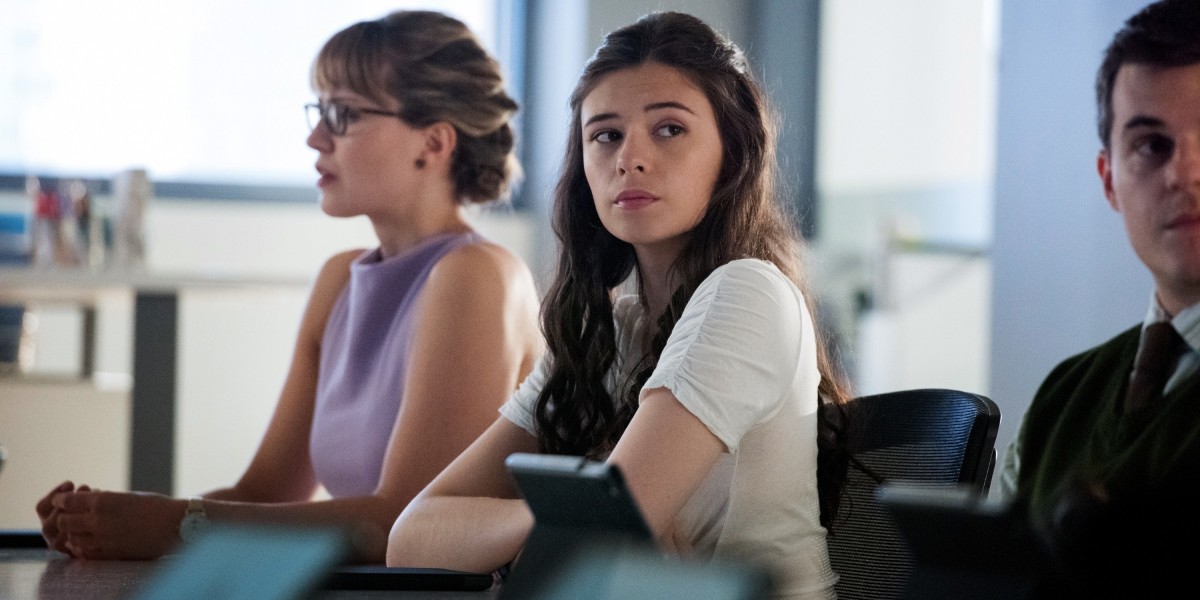 A trip down memory lane

God, it’s so wonderful when two characters come together for a story that don’t normally get much time together, like Nia and J’onn. This was the perfect reason for the two to have scenes together, and watching Nia’s powers work is quite intriguing. It feels like we don’t get to see what she can do very often, and we still don’t know the extent of what Nia can do, so hopefully further exploration will be done as she gets more comfortable and advances.

From the end of J’onn’s first stroll through his memory, I knew it would be revealed that he was the one who wiped the hive mind of Malefic’s existence to ease the pain of his father and himself. Though I don’t quite understand where this story could be going. J’onn’s stories don’t seem to have many long-lasting impacts, and Malefic just seems like a blip in the road as of now.

I don’t understand why the Monitor (or, as I’ve suspected since the Supergirl season 4 finale, the Anti-Monitor) brought back Malefic, especially if the series isn’t going to be building up to “Crisis on Infinite Earths” in the same way Arrow and The Flash are. I hope the point of this story — obviously aside from just having a Big Bad to face — becomes clear in the near future, and it offers some insight to what J’onn needs to take from this experience to prepare him for the future. 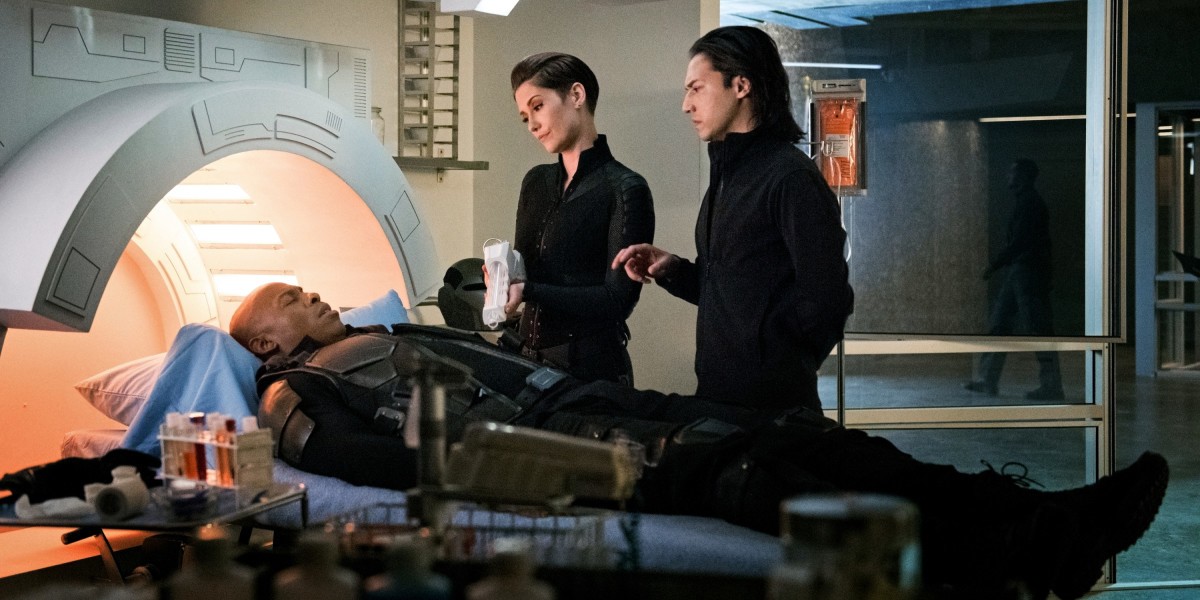 The amount of time on-screen that James is receiving is a little surprising, seeing as the writers were gearing up for his exit when writing these episodes. That said, I love what their doing with the story, and I absolutely adore what they’ve done with Kelly already.

I was fearful that Kelly would just be written as Alex’s love interest, but her new mental connection to Malefic should prove quite useful in stopping him. Could Kelly be the one to stop Malefic… by talking about his feelings? I suspect she’ll get a front seat to his memories in the coming episodes, giving her insight that the others will need to stop him without force.

Even then, Kelly is such an interesting character and I would be ecstatic to see more of her backstory as we watch her grow. She’s such a passionate, kind, and intelligent woman, and her relationship with Alex is beautiful. For a better idea of what’s to come, read the second half of our interview with Kelly’s portrayer, Azie Tesfai, below. (The first half was published in our screener secrets for this episode.) 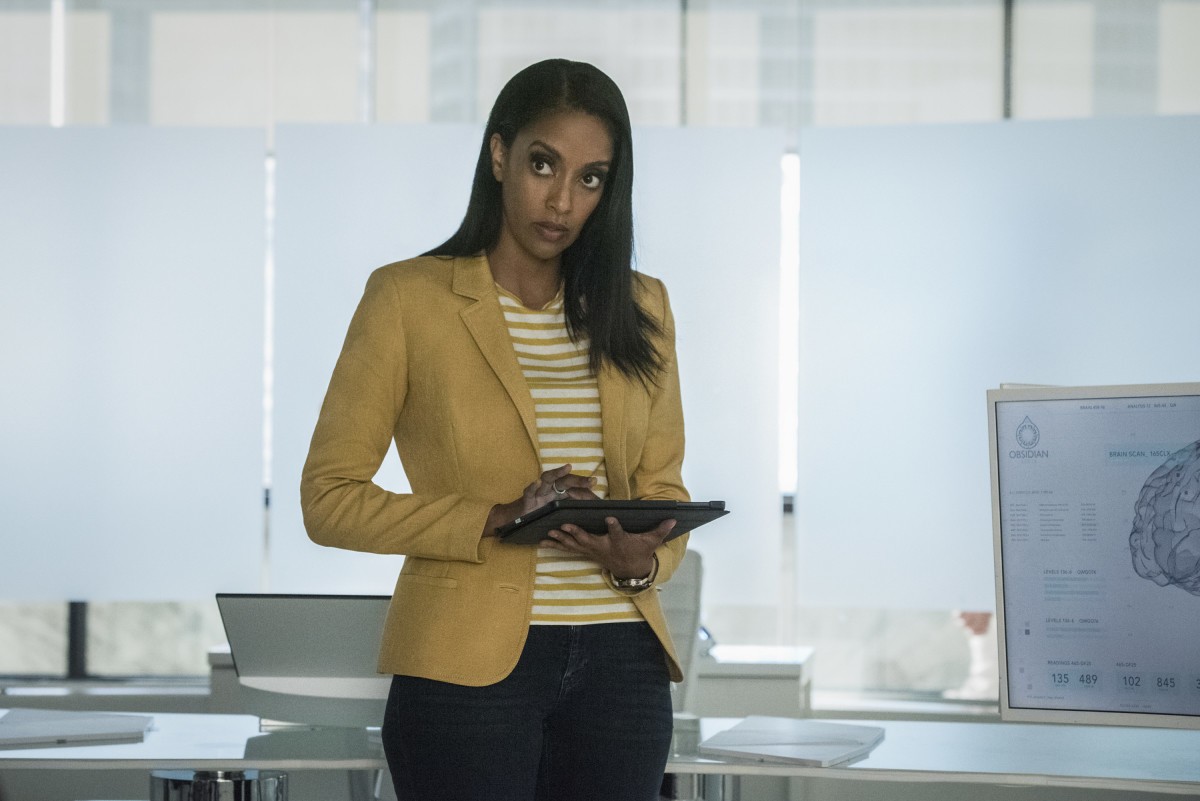 What has been your favorite scene to film so far?

Azie Tesfai: Oh man, it’s all kind of a blur. Probably [the scenes in] this week’s episode with Sean [Astin]. We shot all of that in one day. He was only up here for the day. It was great, and he’s so kind. It was the most fun I think I’ve had in a long time, on any job. We never wanted to leave work, [even] at the end of a 15-hour day. I think it’s the stuff in this episode coming up. Then, also getting to work with Chyler and Mehcad [just in general]. They’re both two of my favorite actors.

I can’t say what the scene is, but on top of that, I did a scene with Chyler last week that was my favorite. I can’t say what it was about. I can say that, just purely from an acting perspective of getting to work with someone where on both of our coverage, we were both so in it [and] so emotional. You don’t normally get that. Normally, you kind of have a full performance on your coverage. It is one of the few moments in acting where you’re so connected to your partner that it’s like magic. I think that was in episode eight or nine.

IAt the end [of the episode], we see Kelly leaving town with James. Can we expect some sibling heart to hearts in the next episode?

Yeah. Mehcad and I, we’re friends, we’re family in life as well. We work really well together. Those scenes are my favorite because I get to just connect with someone that I love in real life very much. Mehcad always jokes that he could never yell and freak out and get that calm loving support from me but he could do that with Kelly. She’s so level headed that she responds in such a sweet way. There will be lots of that coming up.

What was your reaction when you first learned that Kelly would be mentally tethered to Malefic?

I was excited. I was excited that getting to play different sides of that. Especially in the last episode. I love playing and creating a version of Kelly that is not herself. She is so sweet, pure, and has the best heart to explore a darker side with Malefic. It’s one of the most fun things I’ve gotten to do with her. I loved it. Then for this episode that crazy scene with Sean’s character throwing me through the glass and him controlling me, was one of the coolest things I’ve gotten to do on the show as well.

How will this new development, the tethering impact Kelly and Alex’s new relationship?

What I love so much about episode two is we’re in a world where there’s usually peace for a very short amount of time, then something goes wrong. Kelly and Alex may not have known each other for very long, but they know each other. The depth of their connection is shown as different things arise, and they’re tested. Even in the last episode where Malefic took over Kelly’s body and mind, Alex knew who she was. I think again it adds a different layer of depth and I think all of the chaos that is happening right now brings us closer together for sure.

Might Kelly get a better understanding for Malefic by being tethered to him mentally and maybe seeing his memories like Nia and John did this week?

Yeah, I think when you go inside the mind of someone, you are connected. I think it’s actually explored pretty good. So you’ll see that realization. The interesting thing about that is Kelly is new to this whole world. She didn’t know anything about this until she came to see her brother and he wasn’t doing well. Her being thrown into the middle of all this and trying to understand it all and her part in it. Which, she didn’t really ask to be a part of. We explore a lot in the episode, not this week’s episode but the next episode after that.

Supergirl season 5, episode 3 is another impressive episode; even though I felt the previous episode was a bit lackluster, it was still very high quality and solid. The direction of this season is very impressive, just like Supergirl season 4, and it’s clear the series is in its prime.

The prospect of the stories the writers have introduced and those they have yet to further progress (like Leviathan) is exciting, and it should be so fun to watch. The actors are clearly having so much fun, which is rare to have after five years of the show being on the air. Bring on more Supergirl for years to come, please!