With the forces of the Bad Place apparently chastised and Chidi now a formal member of the great Experiment, everything must be bronzer again, right?

Oh well… you know… not exactly…

Hoping to shame Good Old Boy Brent into realizing he does not belong in the Good Place, Eleanor stages a talk show called for denizens of the neighborhood to share their overwhelmingly good goodness. Brent is unmoved, so Eleanor decides to deploy the Bad Place strategy of turning the neighborhood into a tiger-striped, Perrier-raining, golfball-terrorized realm of chaos.

This sort of has the desired effect; Brent realizes that he doesn’t belong in the Good Place… but concludes instead that he belongs in the “Best Place.”

At Mindy’s house, Janet and Tahani propose to Michael that Eleanor is ineffective as Team Leader and should be replaced. Eleanor walks in on this discussion and angrily quits. Michael finds her in the wreckage of the talk show set, reminding her of the impossibly high stakes of the experiment. Eleanor insists that this is why she’s quitting — she isn’t meant for solving existential crises, or setting Chidi up with Simone, or saving humanity. 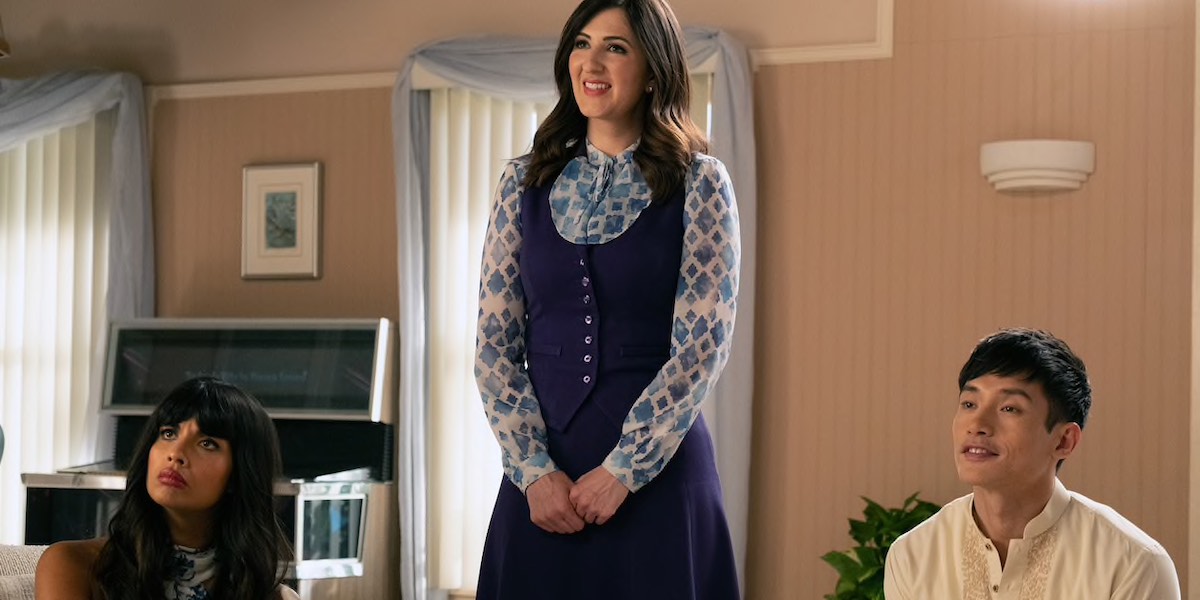 “I’m just a girl from Arizona,” she says. A flawed, ordinary girl who did a bad job being in charge of her own life — how can she be in charge of anyone else’s?

Michael isn’t phased. “Like it or not, the only one who can save humanity is a girl from Arizona,” he tells her. Yes, it will take failure, but she must keep trying.

Regrouped, redressed (and presumably showered), Eleanor makes amends with the Squad and tries a new tack with Brent. She and Michael “confirm” that there is indeed a “Best Place,” to which only the cream of the Good Place crop are admitted. If Brent does enough good deeds, he’ll get in! Thus the ashhole is neutralized in his ashholery, at least for the time being.

Sure, his points won’t go up while he’s selfishly motivated, but Eleanor was in the same position — maybe he’ll also start being good out of habit. Eleanor realizes that Michael was probably faking the panic attack that put her in this position as motivation for her.

Hiding her pain, Eleanor tells Chidi that he and Simone are soulmates, enlisting him to help Simone come to terms with her afterlife. He is thrilled at the prospect and confesses that throughout his life, he never fell in love, which Eleanor, heartbreakingly, knows. Chidi convinces Simone to lay off the Solipsism. This philosophy is impossible to disprove, but suggests that she treat everyone with kindness and respect, just in case they are real. They begin to hit it off. 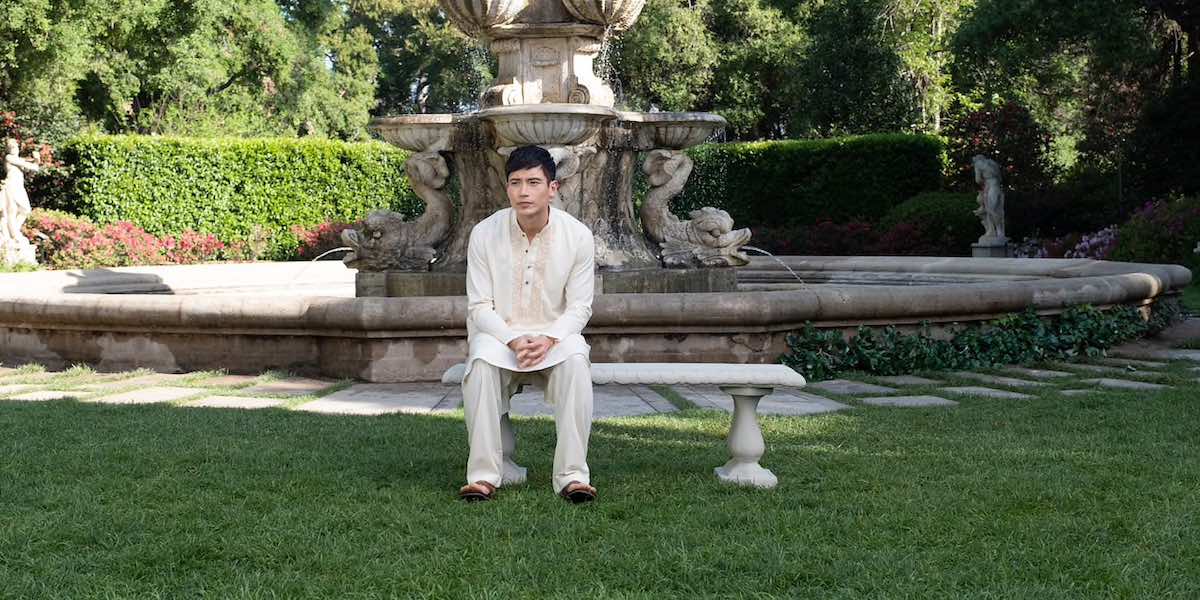 Meanwhile, Jason is distressed over Janet’s distance and goes to Michael for advice. Michael tells him that Jason has no impulse control and urges Jason to give Janet space, proving he can control himself.

Unfortunately, when Janet finally meets up with Jason, she says that being together might endanger the experiment, and that they should take a break until it’s over. Oh, and the Jaguars cut Blake Bortles. Sorry Jason ? Later, Tahani comforts him, telling him that he has the support of his friends.

The Good Place 4×02, “A Girl from Arizona (Part 2)” acts as the emotional closer for the season premiere, as Eleanor’s equilibrium evaporates in the face of targeted emotional chaos. The calm face she presented in the premiere (represented partly by her razor-sharp suit game) finally shatters when confronted with her own self-doubt manifested in her friends.

After all, it’s one thing to feel like a chaotic mess on the inside. It’s quite another to learn that your trusted core thinks you’re wearing that chaos on your sleeve — and in fact, are perpetuating it. This accomplishes what even losing Chidi, sending him toward Simone, getting socked by “Linda,” and Brent’s unyielding awfulness can’t manage: They expose the old, defensive Eleanor, sending her into a brief emotional lockdown. Everything makes sense when Eleanor is just a girl from Arizona; the chaos may not be resolved, but at least it is all her own.

It must be said that the Soul Squad and Janet’s rather sudden and surprisingly emphatic diagnosis of Eleanor’s shortcomings strikes something of a strange note in The Good Place 4×02. It’s not that their concerns are misplaced per say, but presenting it’s a very emphatic move considering how close and determined the Squad has been. It’s also resolved oddly quickly, with little by way of real emotional resolution between Eleanor, Tahani, and Janet. Still, their expression of doubt precipitates one of the highlight scenes of the series as a whole. Michael, finding his charge alone amidst the neighborhood’s Brent-inspired chaos, confronts the internal fear of wild inadequacy that plagues not only Eleanor, but so many humans. Michael’s arguments about Eleanor’s crucial role in the fate of humanity are beautifully applicable to her, of course (and they are received with moving intensity by Kristin Bell.)

But isn’t it true for most of us, too? Don’t we feel unequal to the work of saving the world, in whatever form that may take? Don’t we imagine that there must be some magical Michael that could do it better and with so much less agony?

The fact is though, Michael (and other saving influences) are limited by the boundless chaos of our species. It’s not up to a reformed demon to save the planet, or humanity, or one unpleasant person like Brent. It’s up to us all — we who surf the tides of our own wildness, and are each uniquely positioned to save whatever we can in the great tide of existence. We are all, essentially, just a girl from Arizona — with all of the wonderful limits and abilities that that entails. 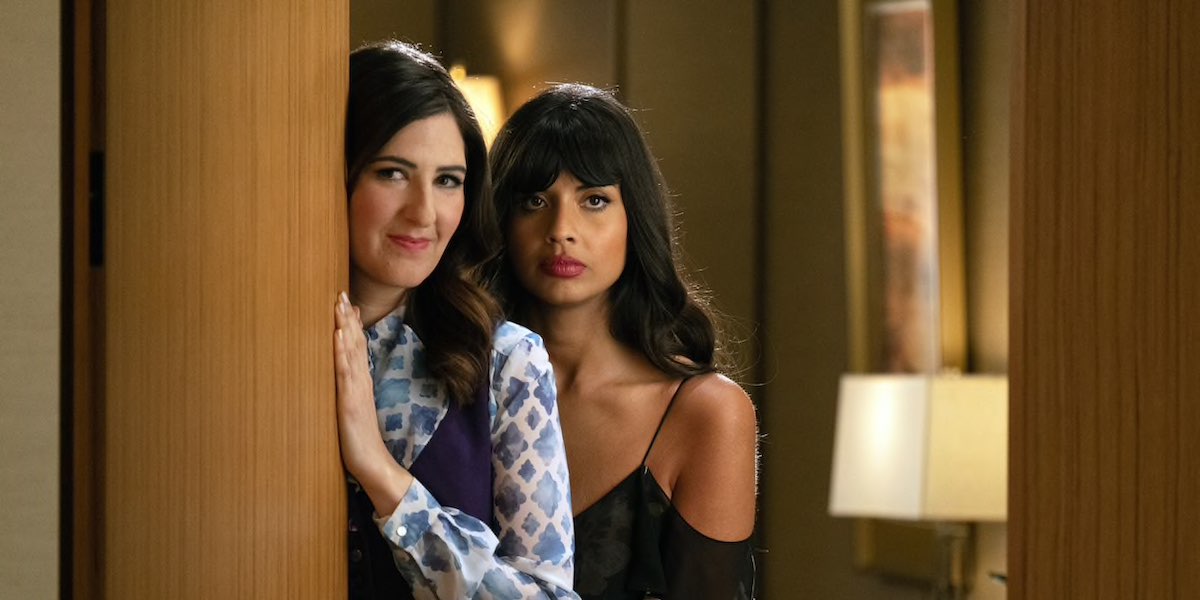 Soaring philosophical motifs aside though, I have to wonder if something might not be afoot with Janet. Everybody’s favorite not-robot is acting more ruffled by the events of the neighborhood than we’ve ever seen her… and she also acts as the mechanism for truly unmooring Jason, who is apparently not paired to any of the test subjects.

Could Janet’s Janet-ness have been somehow messed with? Has the threat of the Bad Place not been as fully neutralized as Michael thinks? Is there more than just natural human chaos working on the Soul Squad?

Or should I just give Janet a break?

Jason: So… you’re saying that wanting to do something isn’t a good reason to immediately do it. Man, I wish somebody had taught me this on Earth!
Michael: People tried. Mostly judges.

Brent: I went to Princeton University. No handouts, by the way, I earned my spot there. Just like my father, and his father before him.

Eleanor: If I could give you some feedback, I’d say that you’re all ungrateful ashfaces who can shove your fat grumps all the way up your snorkbox!
Michael: Which curses were those?

Michael: You don’t just get to quit this, Eleanor. This is not your seventh grade band, or three hours into a two-week juice cleanse. Little more at stake here.

Eleanor: Everything I do blows up in my face. I’m like a hot, blonde, Wile. E. Coyote.

Jason: Janet! I’m so happy to see you! I got you a box of chocolates, but then I remembered, you can’t eat! So I ate them, and I thought it’d be a nice present to describe them to you! So, the first one was GROSS.