Dye your hair, torture your boyfriend, and connect with your emotions on The Good Place 4×03.

Last week on The Good Place, Eleanor tricked Brent into act kindly, and also sacrificed Chidi on the alter of the experiment. It was a lot! But before you get FOMO, let me fill you in on…

Eleanor and Michael plan to kick back and watch while Chidi improves Brent’s garbage soul, but find their plans disrupted when Chidi is (shockingly) unmotivated to ethicize the douchebag. The two realize that Chidi is actually enjoying his time in “heaven,” and needs a little hell in his afterlife to motivate him into helping others and improving.

Eleanor and Michael recruit a depressed Jason to torture Chidi by pulling the “Everyone thinks I’m a Buddhist monk but I’m actually from Florida, HELP!” routine again. Jason is VERY good at his job, and within the span of a week, Chidi is eating himself alive with guilt over the deception, and terror that Jason will give them both away. 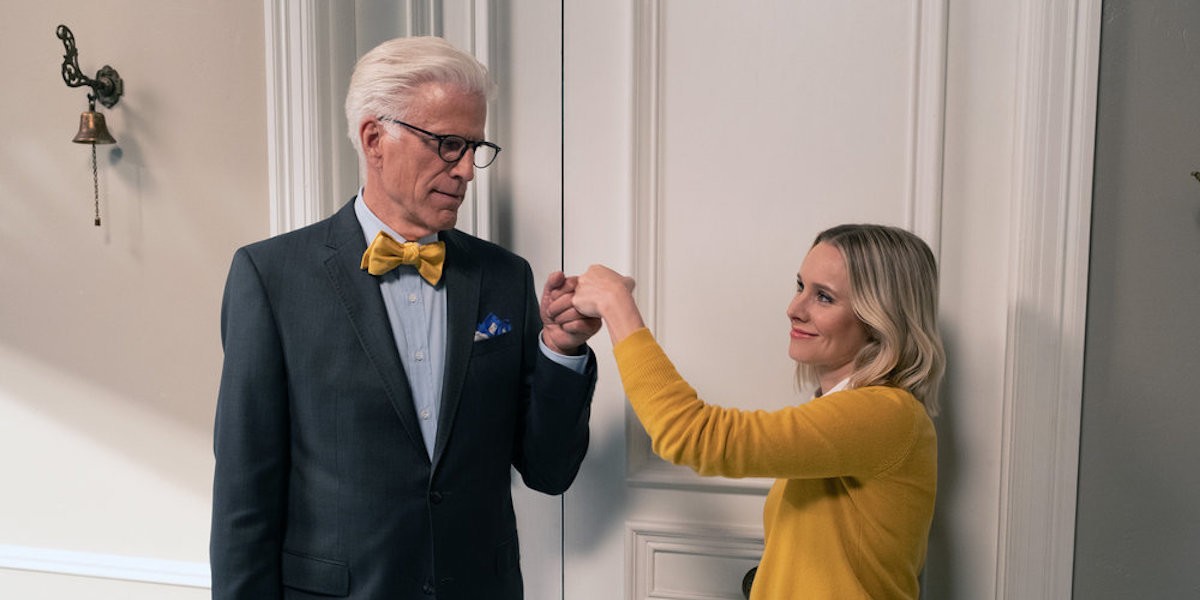 Jason cautions Eleanor that Chidi is under enough stress, but Eleanor insists on turning up the pressure at the neighborhood luau. Sure enough, Jason can’t resist hurling his magic lava stone into the sand and manifesting the unmistakably-Jason’s heart’s desire of a motorcycle emblazoned with Pamela Anderson’s cleavage. Desperate, Chidi lies and claims the motorcycle as his own, which… come on, man.

Desperate, Chidi tries to confess to Eleanor and Michael. He can’t quite get the truth out, but does admit that he feels punished for some wrongdoing in the Good Place. Eleanor bursts into tears, horrifying Chidi. Michael offers to eliminate the problem and Chidi pretends its the motorcycle, which explodes in front of Jason.

Meanwhile, Tahani throws her energy into reforming Gossip John. She tries to remedy his jealousy by treating him to the super-duper VIP life, which does seem to take the edge off — but John laughs at the idea of attending Chidi’s ethics class.

Flummoxed by his resistance, Tahani follows Janet’s advice and tells John that his blog was hurtful to her, and he should take the opportunity to change. John shoots back that he built his own success out of hard work, and that Tahani is the one who needs to improve, leaving her stunned. 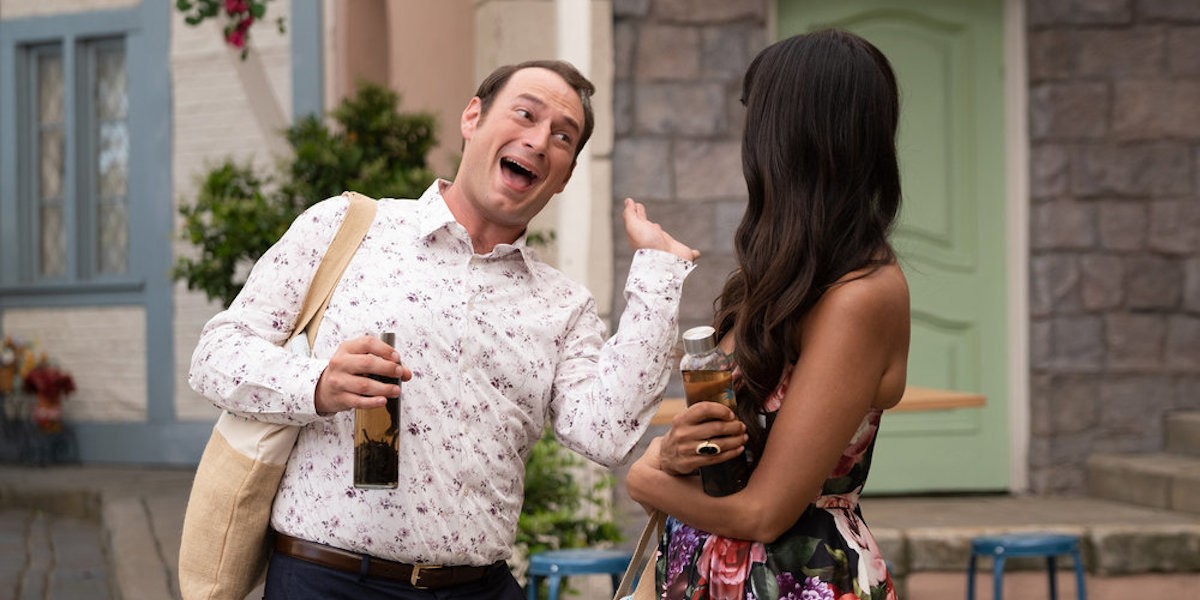 Janet encourages violence in retribution, but Tahani realizes that John’s problem (and her own) is not jealousy but loneliness. She tells him that they now have a chance to move past their status-obsessed solitude, and John apologizes for hurting her.

Finally, Chidi forms a new plan: Teach Jason ethics, so he can fit into the Good Place! (Wonder where he got that one from.) Eleanor feels guilty that she liked torturing Chidi — she knows it’s unfair, but she felt like she was getting revenge for his leaving her. Michael tells her that she’s allowed to feel angry — she just needs to work through it and get her shirt together.

With John in the happy column and Jason feeling better, Eleanor declares that they’re on the right track. “What’s next?” she asks.

Eleanor can’t hear it, but a distant, hooded figure taking the long railroad track over from the Bad Place has her answer.

The Good Place 4×03 is pretty much perfect as far as episodes of television go. In contrast to its rather understated title, “Chillaxing” forms not one, but two remarkable arcs of self-delusion-turned-healing. In a season where most of its main characters have graduated into morally-improved enlightenment, The Good Place draws some of its most powerful material from understanding that Eleanor, Tahani, Jason, and Chidi all still have a lot to learn.

Without saying it in so many words, “Chillaxing” gets across quite clearly that Eleanor’s current struggle is with grief. The first two episodes of the season have been too chaotic (intentionally so) for the truth to sink in. But now that the Soul Squad has begun to get a handle on their test subjects, Eleanor can no longer avoid the emotional effects of her loss. 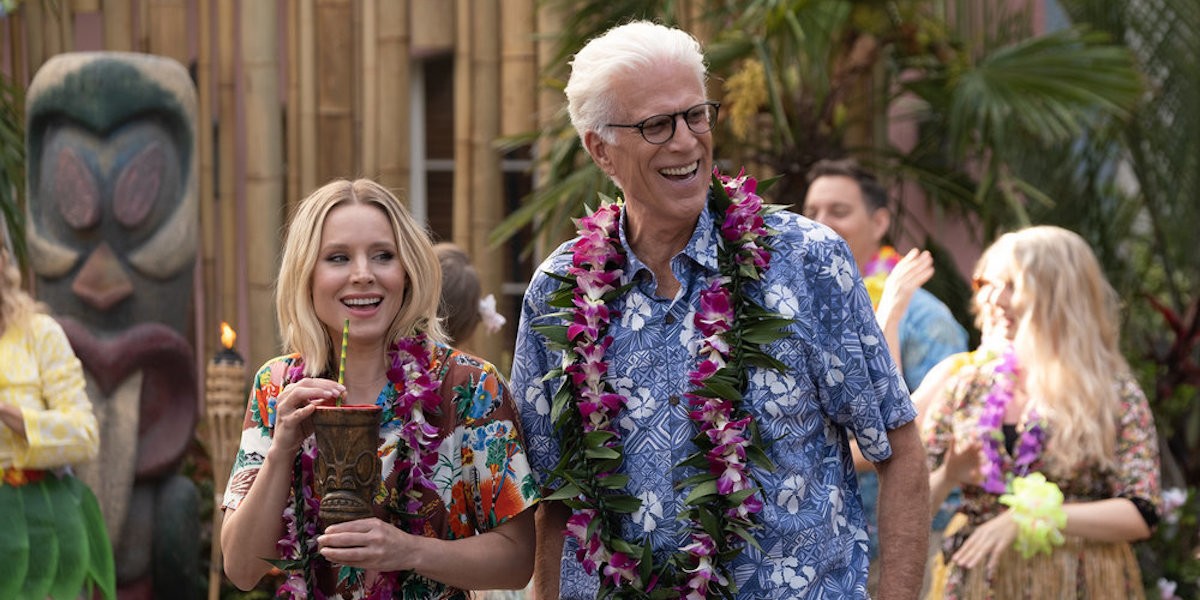 The fact that her response is anger — and anger directed specifically at Chidi — is a canny choice from The Good Place writers. Eleanor has always tended to respond to adversity with aggression, but now her anger isn’t a porcupine-like defense mechanism.

Yes, that was a deeply selfless act of sacrifice. But in recognizing the damage Eleanor suffered as a result of that sacrifice, The Good Place makes room for illogical — and yet legitimate — emotion against the backdrop of moral philosophy.

Sometimes we feel things because we feel things. And that’s okay. Like, don’t torture your ex-boyfriend because of it, but feel your feelings, people.

Meanwhile, Tahani’s journey to understanding with John is equally moving (if, thank goodness, less tragic.) It might be cliche to talk about the pressure to social climb and maintain the illusion of popularity in today’s digital culture (and now that I’ve written that sentence, I agree) but the fact remains. Whether you’re a zillionaire socialite or a sleep-deprived social media maven, we live in a time where it seems more important to look like you are successful than to feel that you are happy. 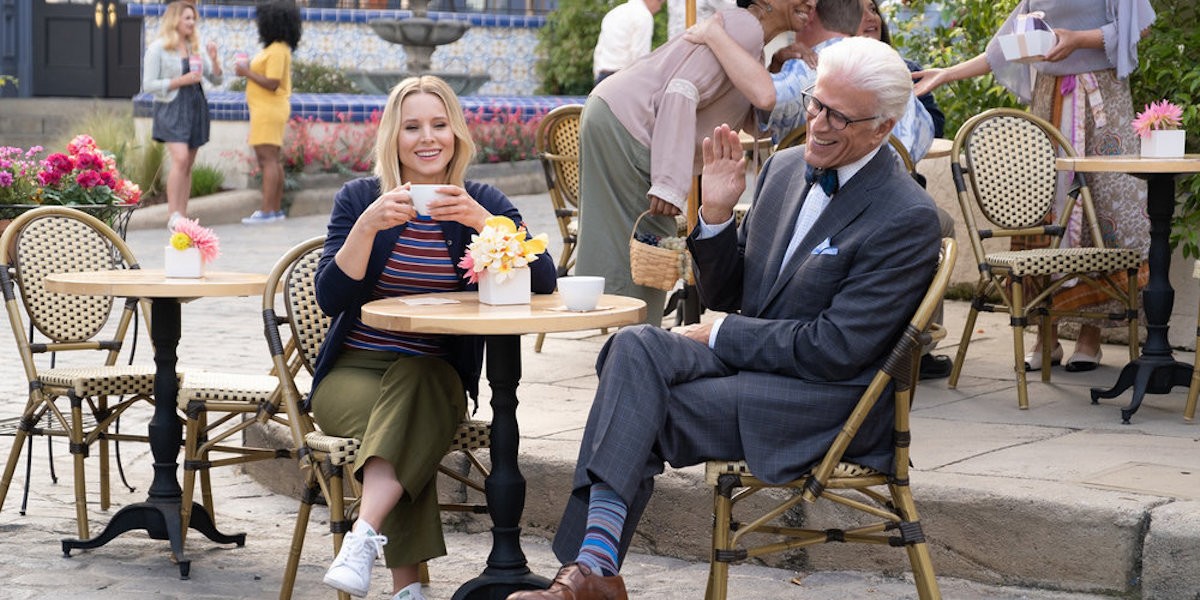 Followers, money, gossip, clicks, attention — this is the empty currency by which both Tahani and John have measured their worth. No judgment; so many of us do this without meaning to. But as Tahani realizes, none of that will make you less lonely. It’s especially nice to see razor-sharp, eternally mocking John absorb this message — there might be hope for the sarcastic, late night denizens of the internet after all.

Also worth noting is the fact that Janet continues to act weird (#JanetWatch) and now what looks like the literal Grim Reaper is on his way to the Good Place. It’s hard to say who this wildcard might be (three cheers if it’s Vicky!) but my admittedly out-there guess is that it’s the real Janet, fleeing from her captors to vanquish the imposter!

Okay, it’s unlikely. But do you have a better guess?

Tahani: [The Posh Wash] is the most coveted invitation in England! Membership is based on weight and net worth. Gain a pound or lose a point, and you’re out!

Jason: [My motorcycle] exploded a week after I got it because someone wanted to see what would happen if they poured lighter fluid in the engine.
Chidi: Was that person you?
Jason: Yup! Turns out, it explodes.

Tahani: The problem is, if all you care about in the world is the velvet rope, you will always be unhappy, no matter which side you’re on.

Jason: I always want to get better, that’s why I spent so much of my time at the free clinic!