“He solves the murder on page ten, what is the rest of this book about?”

After last week’s episode of The Good Place, things seemed back on track for the Soul Squad. Janet’s back, the humans are on track, no demons to be seen here — so what could go wrong in ‘A Chip Driver Mystery’?

What happened on ‘The Good Place’ season 4, episode 6?

Michael visits Bad Janet in prison in Janet’s void and informs her that, after six months of captivity, he will tell her a story and then get rid of her. He brings a book with him, which is only part of the story.

One week ago, Chidi, Simone, John, and Brent went on a ski vacation that proved surprisingly successful for their moral development. The Soul Squad is thrilled, especially at Brent’s improving behavior. Unfortunately, matters start to skid when Brent demands that the rest of his new friends read and compliment his new book — Six Feet Under Par, a Chip Driver mystery.

I think we can all come together in heartily saying: Oy.

Simone, understandably, immediately begins tearing apart the very terrible and also racist and sexist book. This highlights the fact that Brent and Simone encourage exactly the behaviors in each other that they need to overcome. Things get worse when Chidi, offended by Brent’s interpretation of him as Igby the four-eyed coward, begins dancing spontaneously with Jason — and John walks in, discovering that Jason’s true identity. 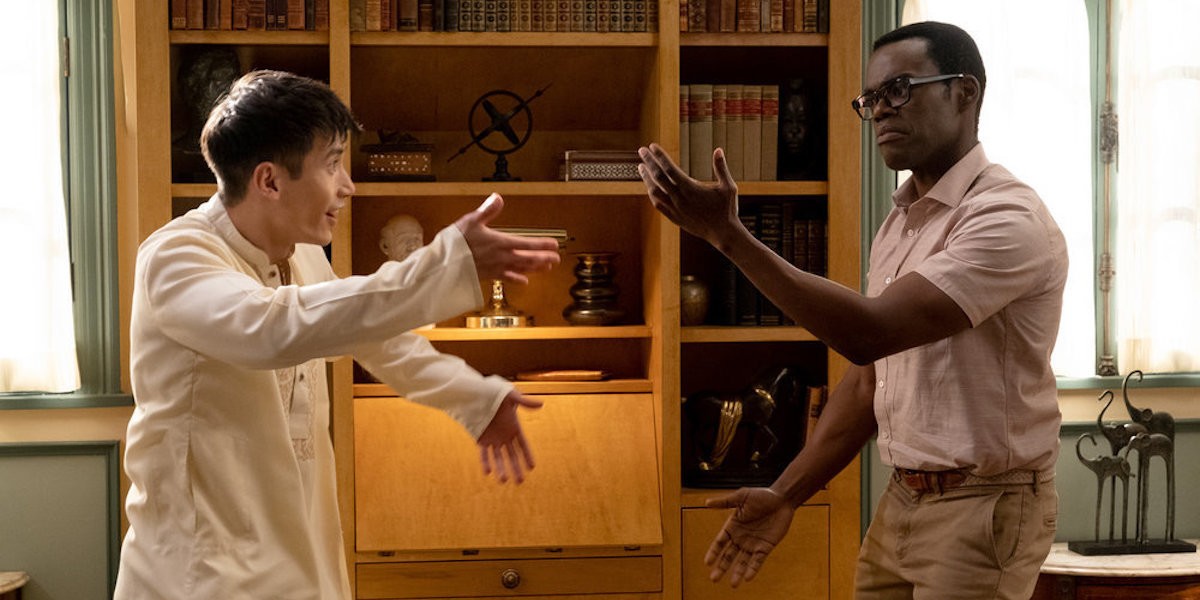 In Bad Janet’s cell, Bad Janet demands that Michael skip to the end and conclude that humans are terrible. She cannot understand Michael’s hope for the improvement of humanity. Michael counters that people are good sometimes, and continues the tale.

Chidi begs John to keep Jason’s “secret,” a hugely challenging prospect for the former gossip king. Meanwhile, Eleanor asks Simone to forgive him. She declines -— why should the burden of forgiveness be on her instead of the guy who wrote the racist, sexist, and also just plain bad book?

While Eleanor brainstorms an answer to this excellent point, Michael gets Brent to admit a bad shot on the golf course and move on. But his minor improvement makes no difference at Brent’s signing party, when Eleanor’s advice — that Simone and Tahani stick with neutral statements instead of critique — crumples in the face of Brent’s gigantic ego. Confronted with the fact that Simone and Tahani think the book is offensive, Brent storms off in a rage of privileged anger.

The Soul Squad resolves that enough is enough: The clock is ticking on the experiment, and they can’t waste time handling Brent with kid gloves. Michael tells him point-black to apologize, which Brent does… not, angering Simone and Tahani. Brent freaks out and calls Simone a condescending bitch (apparently that’s allowed in the Good Place?) and Chidi punches the whiney man child.

It’s a mess, and Bad Janet delights over the irredeemable suckage of humanity. But Michael says the story isn’t over.

Defeated and depressed, the Soul Squad contemplates this catastrophic turn in the experiment. But instead of wallowing or giving up, Eleanor, Tahani, and Jason begin brainstorming possible solutions, starting small and regaining their confidence that they can still save humanity.

“That was an hour ago,” Michael tells Bad Janet. He says that the group showed him humanity’s capacity for improvement — a much more important metric than just good or bad, and the source of his optimism. He shuts down the cell, informing Bad Janet he will let her go back to the Bad Place, thus being a little better himself today than he was yesterday.

Bad Janet is visibly unnerved by Michael’s earnestness. She leaves after accepting Michael’s and Janet’s Book of Humans, their account of everything that has happened. Michael hopes she’ll read it; I think someone will.

The Good Place season 4 has been nearly flawless so far, but “A Chip Driver Mystery” further raises the superlative bar. Incredibly elegant in its simplicity, The Good Place season 4, episode 6 is both a bracing acknowledgment of modern human frailty and a quiet anthem of hope in the face of devastatingly familiar problems. 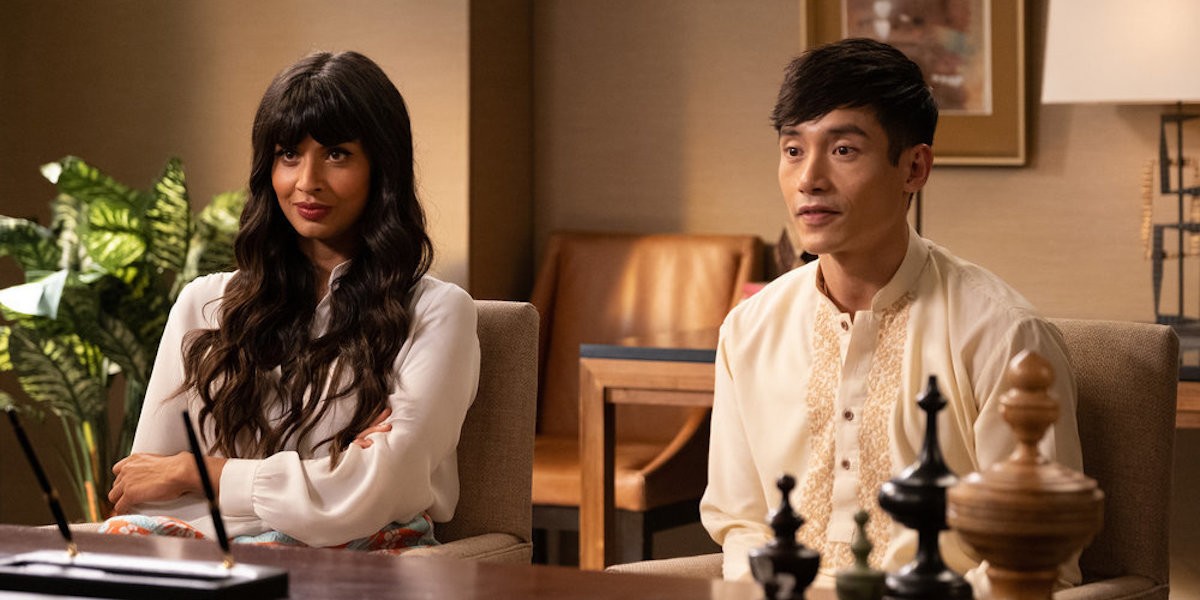 “A Chip Driver Mystery” is a set up as a bait-and-switch. The episode’s central conflict between Simone and Brent, an all-too-recognizable issue today, is desperate for a clear solution. If treating people with dignity and kindness represents true moral quality, does Simone have a responsibility to be moral when Brent treats her badly? It doesn’t seem like that can be the case; all of Eleanor’s attempts to work on Simone lead to disaster, and surely Simone is right when she tells Chidi that they do not deserve to be treated this way.

But if we are not required to be morally kind regardless of the recipient’s behavior, then what is the solution to dealing with a human canker sore like Brent? What kind of philosophy is actually effective against someone so single-mindedly convinced of their own excellence? And how can Simone be coaxed toward more positive judgements when she is so right in this extremely bad case?

As much as effort as it expends on these questions, The Good Place season 4, episode 6 doesn’t answer them. Neither Eleanor’s compromise with Simone or Michael’s tough-love approach with Brent bears any fruit; in fact, they lead to disaster. It’s not clear if there is an answer to what Bad Janet dubs the baby-thin skin of boomers like Brent, or Simone’s understandably iron-clad worldview. If The Good Place has taught us anything in its four brief seasons, it’s that change without self-awareness is simply not possible. 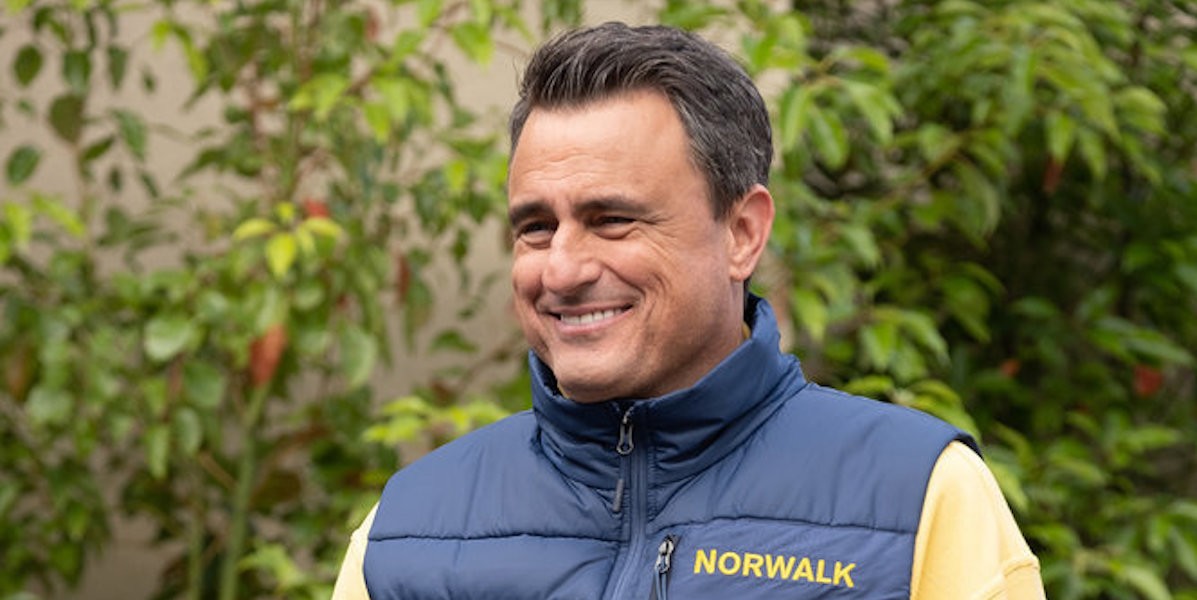 It’s beautifully fitting then, that the resolution of “A Chip Driver Mystery” comes not from easy answers or obvious choices. Ironically, it’s not even Eleanor, Tahani, and Jason who change this week — they’ve already done the work that allows them to so indefatigably return to their challenging charges.

It’s Michael’s awareness of how much they have changed that allows for the transcendental act of the episode. Like Brent, Bad Janet doesn’t objectively deserve to go back home. But without dictating his choice as a universal solution, Michael takes the traditional moral path anyway. He isn’t compelled to free the stinky not-robot. He does it because it is the best moral choice for his own sake; freeing Bad Janet is, literally and philosophically, an act of redemption for both beings involved.

The Good Place season 4, episode 6 doesn’t make any guarantees that Bad Janet will be receptive to this output of good. She may be a base metal on which no moral alchemy can be worked. But Michael has made quite a radical choice here, and in doing so he is allowing the message of the Good Place to spread into places it might otherwise never have gone. 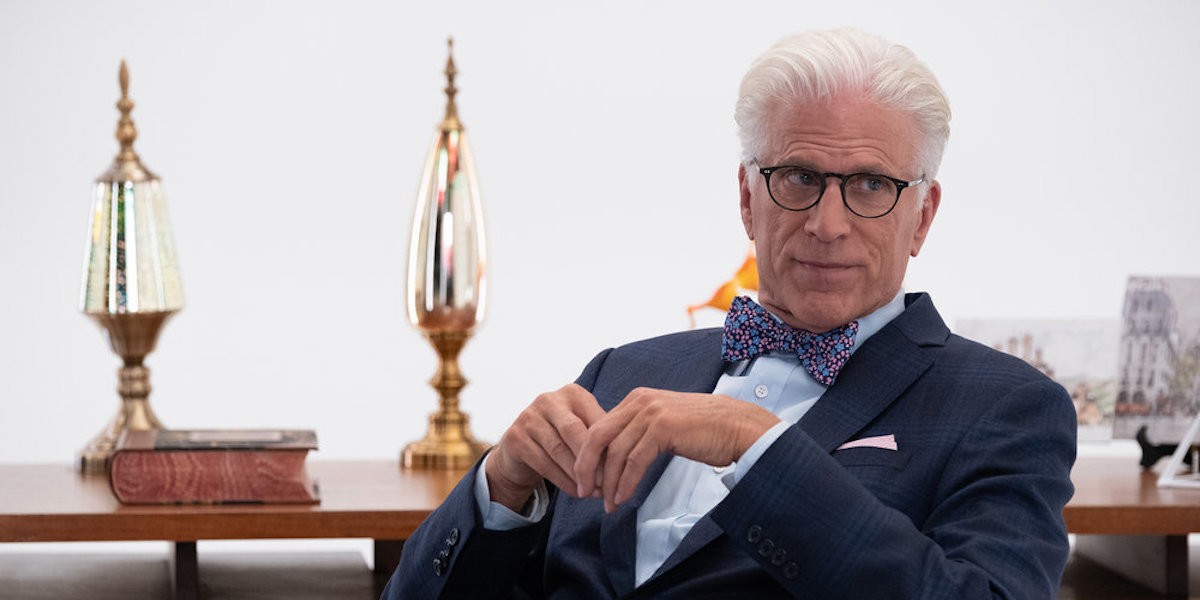 The Book of Humans is a new variable unleashed in this seemingly closed system and for now, The Good Place doesn’t need to answer all of our questions about it — or about Brent, Simone, or Bad Janet. All we need to know, as Michael does, is that change is possible; and it can only be brought about through our own interior revolutions.

Chidi: I couldn’t actually go skiing because moving at an angle terrifies me, but that lodge had so many reading nooks! Everywhere you looked, nook!

A Chip Driver Mystery: “Her brown eyes were as brown as the brownest crayon. She had legs like Jessica Rabbit from that movie.”

Michael: This is bad. Brent and Simone is our trickiest relationship. She tends to make snap judgements about people, and he’s a guy who repeatedly confirms the accuracy of her snap judgements.

Jason: If you want to try something spontaneous, I’m your guy. Almost everything I did on Earth, I did without thinking or worrying about what would happen! That’s how I got my nickname: “The Defendant.”

Bad Janet: Do you know what’s happening right now on Earth? Wars. Murders. Women in $400 yoga pants are refusing to vaccinate their children! Vindictive nerds at Apple are changing the charger shape AGAIN.

John: The neighborhood is obviously amazing, but it’s also a little season 4 of Downton Abbey. Beautifully designed, but a real snooze-fest.

Simone: He solves the murder on page ten, what is the rest of this book about?

Brent: Fork! You sneezed, man.
Michael: I don’t think I sneezed. Because I literally can’t.

Tahani: Perhaps I can convince Simone to handle this the British way! Smile bravely, bury your feelings, and allow a steady drizzle to slowly wash away your sadness over 50 years.

Michael: For months, you and I have been debating. Are people good or bad? But as I watched those three people pick themselves up and dust themselves off, I realized we’d been asking the wrong question. What matters isn’t if people are good or bad. What matters is, if they’re trying to be better today than they were yesterday. You asked me where my hope comes from? That’s my answer.

What are your thoughts on ‘The Good Place’ season 4, episode 6?