“Like Spanx, but for your soul!” Here’s our review of The Good Place season 4, episode 8, “The Funeral to End All Funerals.”

After last week’s climactic end to the great experiment, The Good Place season 4, episode 8 answers the question we’ve been asking since last season.

What happened on ‘The Good Place’ season 4, episode 8?

After leaving Mindy’s, Michael meets Sean, Bad Janet, and the Good Place committee in the Courtroom. The Judge arrives and notes that this is the most important case in the history of the universe. Matt the Accountant reveals the long-awaited test results.

Simone, Chidi, and John all improved over the course of the experiment. But Brent… got one percent worse.

Michael goes into damage-control mode, but the Judge agrees with Sean that there is too little evidence to revamp the whole system. Michael argues that the original Soul Squad improved as well. He uses the improvement of Tahani’s sister Kamilah, Eleanor’s mother and her husband’s daughter, and Jason’s friend Pillboy — all impacted by the Soul Squad — as proof that people get better with external love and support.

Sean counters that Brent got worse. But the Judge notes that, with only seconds to go, Brent improved exponentially, clearly a result of the remorse inspired by Chidi.

This is the point, Michael concludes. Yes, the points system is reflective of a person’s past. But it can’t reflect the capacity for future change and rehabilitation.

Visibly affected, the Judge retires to her chambers to make her decision.

Meanwhile, the left-behind Eleanor, Janet, Tahani, and Jason distract themselves from the fate of humanity by holding funerals to mark the end of their many crazy lives. 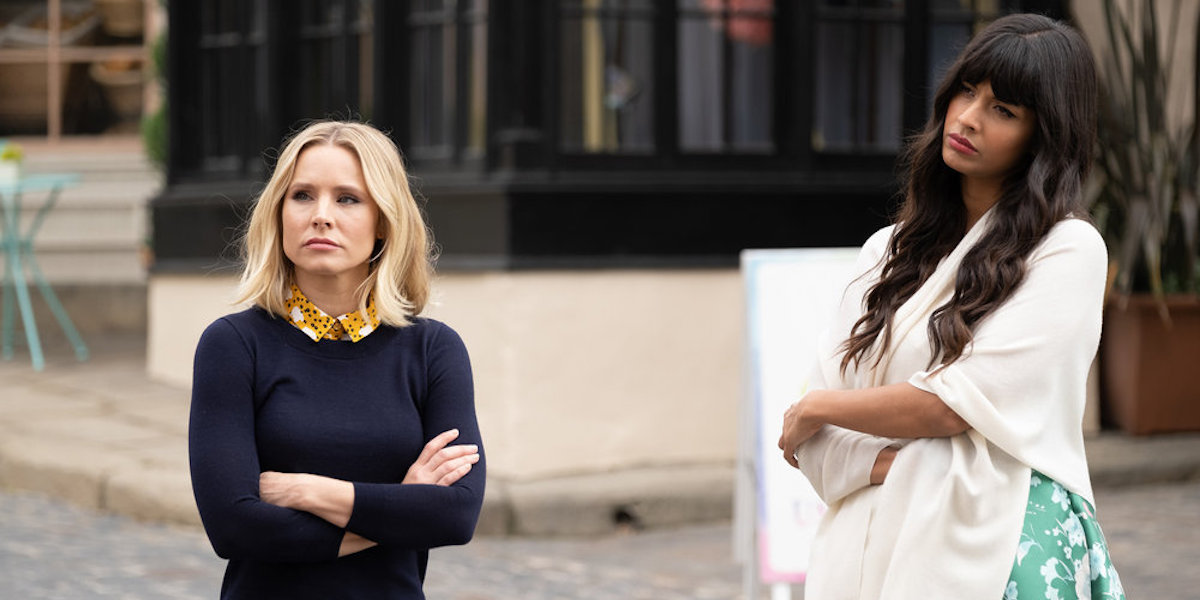 Tahani’s funeral is staged on her private jet. Eleanor eulogizes her, calling Tahani her best friend. Jason is sad that Chidi, stuck in stasis in the bathroom, can’t be there, so the gang retrieves his limp form. At Jason’s pool party funeral, he reveals that he lost his mom to cancer when he was young. Jason is eulogized by his friends while wearing a Jaguars-patterned suit, which is the most important thing about this scene.

Janet says she does not want a funeral, and thanks the squad for what she has learned from them. At Eleanor’s funeral, Tahani thanks her friend for seeing her and Jason sings a wordless song. They begin Chidi’s funeral, but Eleanor is relieved of her struggle to talk about her love with the arrival of the Judge’s ruling.

With everyone together in the Courtroom, the Judge rules that Michael was right. Humans are not morally fixed, and the points system is flawed. Michael is overwhelmed at having won and the Squad celebrates… until the Judge says she will fix the problem by canceling Earth, extinguishing all past and present life, and starting the whole shebang over again. The Squad protests, but the Judge says that life on Earth is just too complicated to be remedied.

Sean gloats as the Judge looks for her humanity-eraser. Eleanor scrambles for a solution, begging Michael to wake Chidi and asking the Good Place committee for help. (They are useless.) The Judge finds the button and is about to push it… but Janet takes the button and hides it in her void. 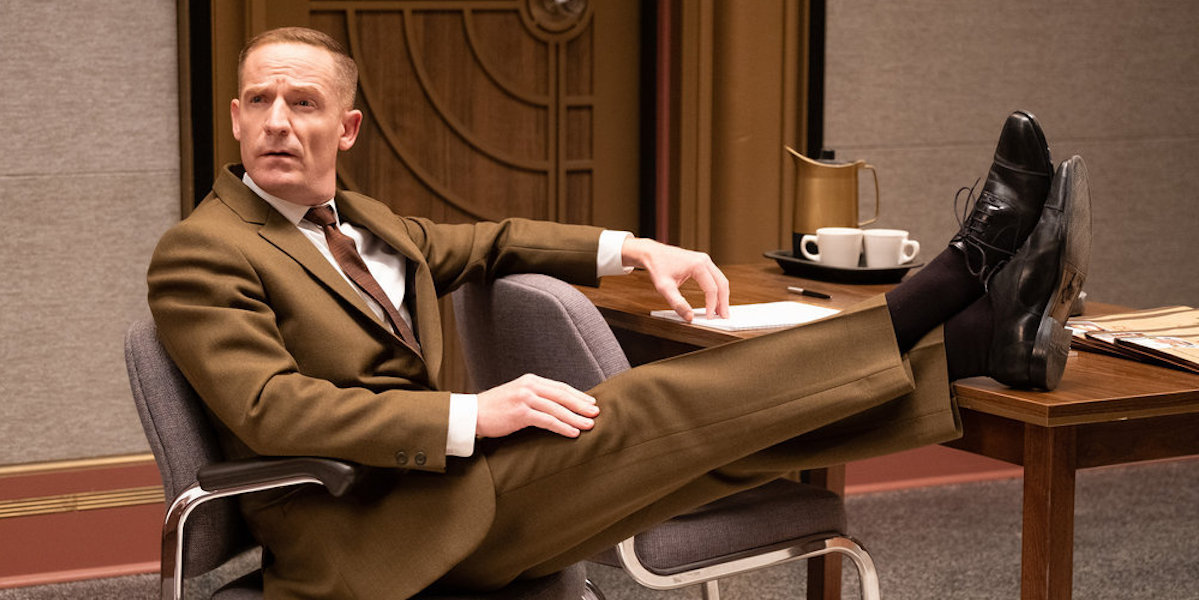 The Judge goes into Janet’s void but can’t find the button. Bad Janet enters the room, carrying Michael’s book. She has the button now, and (while still a nasty piece of work) she has switched sides to join Michael and the humans. Janet hugs Bad Janet, and Bad Janet explains that the Judge isn’t just up against the two of them. All of the Janets have united to hide the button!

The Courtroom fills with Good, Bad, and Neutral Janets. Furious, the Judge declares that she will search all of their voids and then marbleize each of them. She disappears, and the Soul Squad tries to brainstorm a plan.

Michael says they need a brand new system for judging humans in the afterlife. Eleanor insists that Chidi — ethical above all, empathetic, and brilliant — is the best person to build that new system. And he needs his memories back. Michael reminds her of how indecisive Chidi is; he may not be able to cope with 800 different lives of memories and 45 minutes to save humanity.

Eleanor says that it’s now or literally never. “Wake. Him. Up.”

The Judge emerges and marbleizez the Janet.

Michael and Eleanor turn to Chidi and… we’re out in a cliffhanger.

The Good Place season 4, episode 8 is almost surprising in its simplicity. As Eleanor, Tahani, Jason, Janet, and Chidi’s frozen form while time away with “We’re definitely in the final season” funerals, the episode quickly gets to the point in the Judge’s Courtroom.

There, The Good Place resolves one of its (and humanity’s) most essential questions: Are people essentially good or evil? The answer, as proven by Brent, is no.

I just want to take a minute to appreciate the powerful beauty of this idea. We can all change; there is no point of no return. Even as the Soul Squad celebrates the end of another chapter of their existence, “The Funeral to End All Funerals” assures us that there is no real end to our ability to grow. 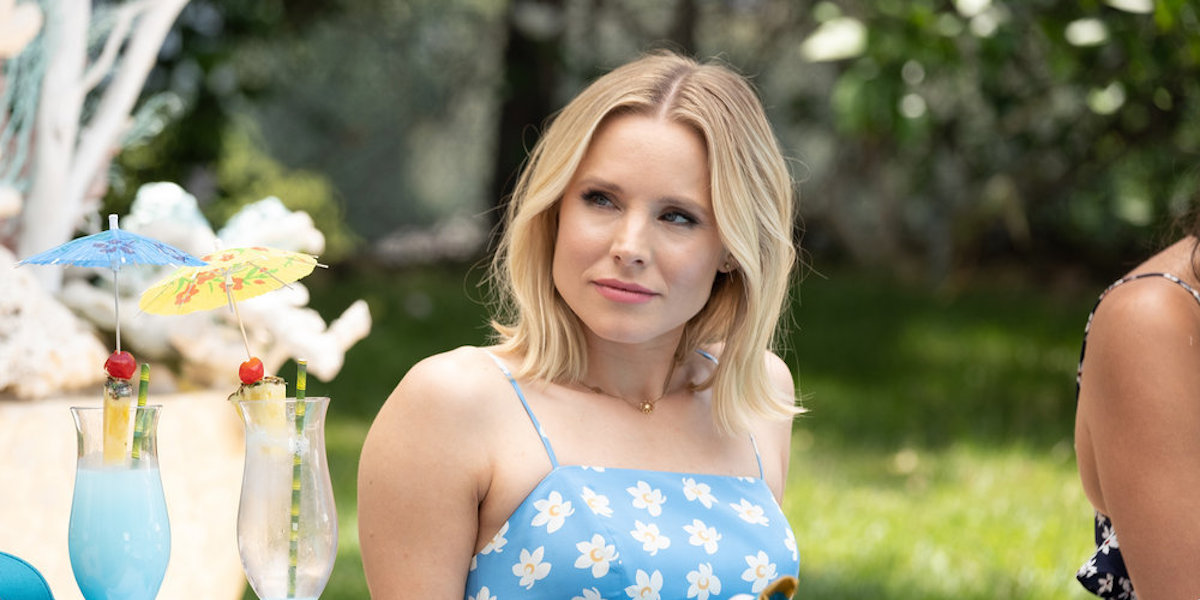 The proof that even someone as nasty as Brent has the inherent capacity to become a better person is what seems to sway the Judge. But perhaps even lovelier is Michael’s lightbulb moment. The good things that the Soul Squad did on Earth don’t exist in a vacuum, calculated alone. Moral acts continue to resonate, creating more good as the people we help are empowered to do the same.

Of course, this understanding also means that the Judge has a point about the impossible complexity of life on Earth. If the grand, cosmic points system can’t accurately calculate the moral impact of our actions, perhaps we are all a little forked as far as choosing our most moral option for behavior.

Obviously, The Good Place season 4, episode 8 isn’t saying that the Judge’s humanity-blitzing zeal is the solution to this problem. (And neither am I, for the record.) Instead, the show turns to the indecisive Kantian to solve this fundamental equation.

Chidi, he who has always tried to define his every action by Kantian standards will now (presumably) do this for all humanity. Eleanor is right that he’s the correct choice for this attempt, and Michael is right in that such a thing will probably feel like the worst kind of torture for Chidi. 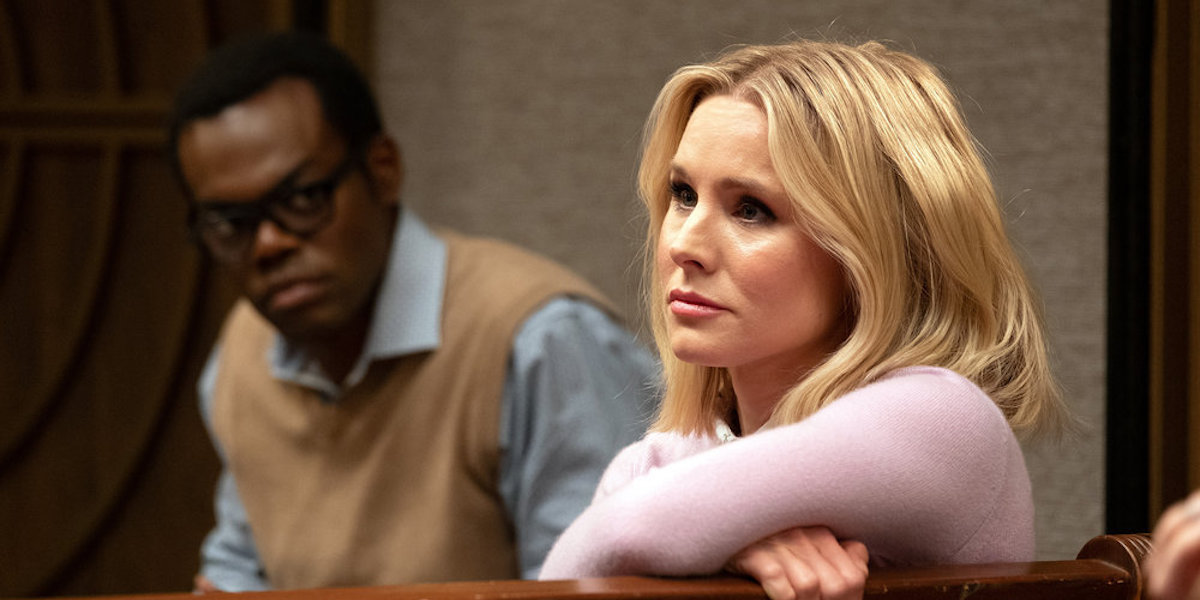 But as per his long, conflicted character arc, this point for now is less about what Chidi decides, and much more about Chidi’s chance to make this decision. Here is the moral act that will define all moral acts; the ability to change encapsulated not in an asshole, but the closest thing The Good Place has to a bonafide angel.

That’s assuming he gets the chance, of course. But The Good Place season 4, episode 8 is all about chances; I have to assume the show has one up its sleeve for Chidi.

Eleanor: Tahani improved so much over her many lives, but she also helped me improve. She taught me lots of stuff, like, bras shouldn’t be painful, and you don’t buy bras at Home Depot, and they don’t SELL bras at Home Depot, what the hell are you wearing? For the record, it was a men’s back support harness, and it worked in a pinch.

Jason: How’d he get so jacked?
Eleanor: When he was 14, someone told him that exercise alleviated anxiety, and he started doing pushups and basically never stopped.

Michael: Are you going to sit there and say that every single Friend belongs in hell? I mean, maybe Ross and Rachel. And Monica and Joey. And definitely Chandler. But Phoebe?

Michael: The point is, people improve when they get external love and support. How can we hold it against them when they don’t?

Tahani: I stand before you, in sweatpants for the first time ever, to celebrate Eleanor Shellstrop in a place where she spent much of her life. A bar, in a house she was not invited to.

The Judge: Humans are not fixed at one level of morality. They can always get better. Which means the points system does not accurately judge how good or bad they are,

Tahani: Why can’t we just tweak the points a little? A little boost, like Spanx, but for your soul!

Janet: I don’t say no a lot, did I pronounce that right?

Bad Janet: Sent the manifesto around to all the other Janets. We have a group text now.
Other Janet: I mostly send GIFs of otters!

What did you think of ‘The Good Place’ season 4, episode 8?