The Lightning Thief: The Percy Jackson Musical has made it to Broadway after a very long road!

Now through January 5, fans can catch Percy Jackson at Broadway’s Longacre Theatre. (Though fans may want to double-check show times; its weekly schedule is unconventional.)

We reviewed the show back when it was off-Broadway, and back then, we deemed it worthy of the gods. It is with immense relief that we can report the show is almost entirely intact from the off-Broadway version, and it is still just as much of a high-octane delight.

(And if we may be a tad impertinent, unlike most of Broadway’s theater critics, we are not offended at the very idea of a musical about teenagers being on Broadway. So there.)

The Lightning Thief Musical strikes an impressive balance between welcoming the uninitiated and indulging Percy’s most ardent fans. It’s a terrific piece of theater all on its own, and if you don’t understand why there’s so much whooping when a random girl says the year “1939,” pay it no mind.

But the fans who’ve read through Rick Riordan’s books many times will get a positive avalanche of Easter eggs to keep them happy — everything from Dam snacks to Mr. D’s Diet Coke. That’s what happens when the musical is written by legit fans of the material — if you’ve any doubt, check out our interviews with Rob Rokicki and Joe Tracz to read all their insight!

Half of the cast (four of the seven) returns from the off-Broadway production, and their portrayals are all the more assured for the years they have spent with these characters. 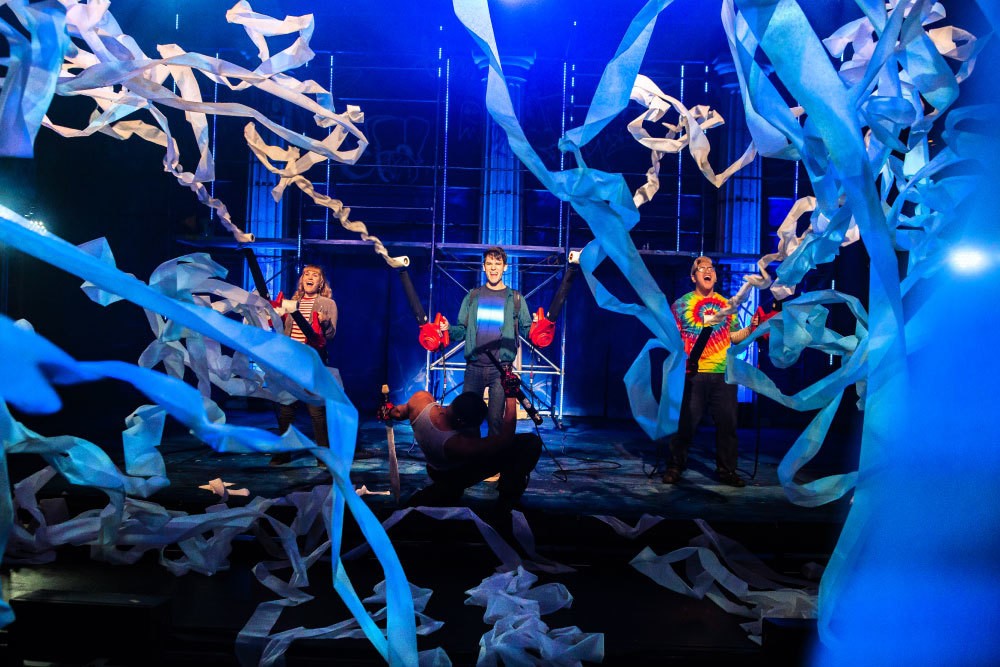 Chris McCarrell is back as Percy, with impeccable comedic timing and a knack for tapping into a lot of feelings. His rendition of “Good Kid,” Percy’s I Want Song, is absolutely heart-breaking, and audiences will feel a powerful urge to give Percy a hug for most of the show.

Kristin Stokes, who has been Annabeth in this musical forever, has made Annabeth stronger and more confident than ever before. Stokes should just sing “My Grand Plan,” Annabeth’s anthem, every day for the rest of time, and we will always listen with baited breath just as Percy does.

James Hayden Rodriguez perfectly captures Luke’s charisma, which makes his character arc all the more tragic. There is a slight change in how the ending is staged (no spoilers!) that had this Luke fanboy flailing with excitement and feeling.

Sarah Beth Pfeifer’s Clarisse is louder and funnier than she’s ever been, and the epic Capture the Flag battle sequence has been beefed up to be a really impressive action setpiece. Pfeifer plays off of Chiron really well, and fans who’ll watch their interactions at the sides and corners of the stage will get some good giggles out of it.

Chiron, Poseidon, and Hades are played by newcomer Ryan Knowles, who infuses all of them with so many extra levels of flair and fabulousness. Where the demigods are more grounded characters, the deities are necessarily larger than life. Of course, a blinding gold jacket for Hades helps with that!

Newcomer Jalynn Steele shows off perhaps the largest range in all the different characters she plays. She seamlessly goes from a young and spunky Silena Beauregard, to a diva version of Charon, to a Sally Jackson that radiates maternal warmth. One of this writer’s friends actually didn’t believe it was all the same actress at first, until he checked the Playbill. 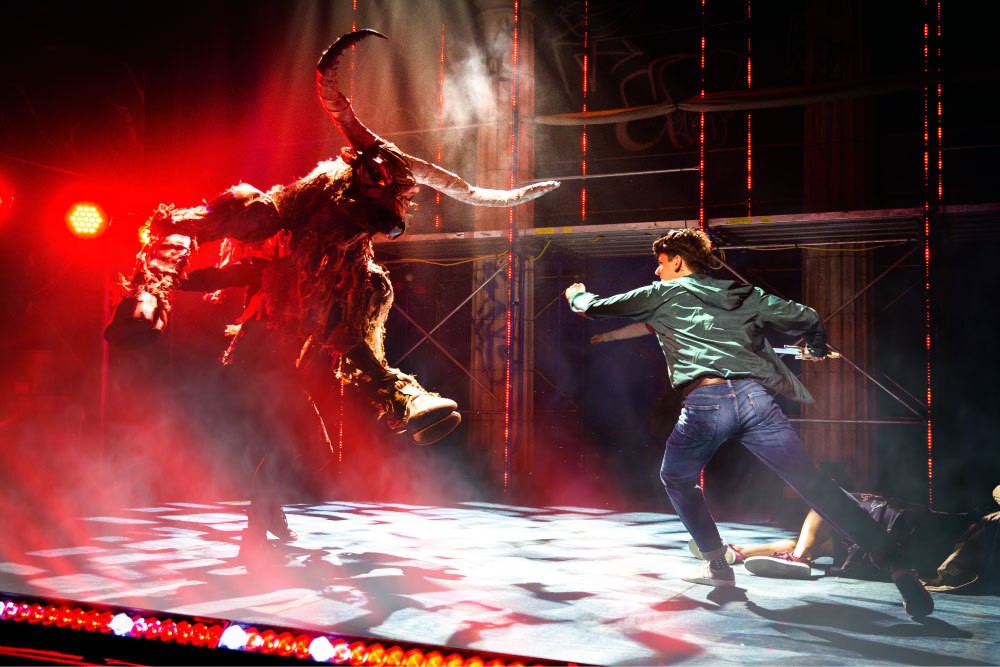 The costumes have seen the biggest upgrade for the Broadway version. Most memorably, the Minotaur is now genuinely huge and terrifying, and his attack on Sally Jackson is visceral and brutal. Not all of the changes hit the mark — the new construction of Grover’s satyr legs is awkward and distracting — but by and large, the new visuals (like the Fury!) work really well. And the production has not left its humble roots behind — there is still a lot of toilet paper used in the show’s special effects!

There are pros and cons to seeing Lightning Thief in the much bigger Broadway theater. On the plus side, it never feels like the musical is struggling to fill the space (which can sometimes happen). And it offers up a better view of certain parts of the show that happen on the second story of the set, like the Capture the Flag sequence and the two-hanky sobfest that is “Tree on the Hill.”

On the downside, looking down on the show lets the viewer plainly see some of the really clever quick prop changes, and the Oracle is just much more imposing when looking up at it.

There are a few other small changes — Sally Jackson and Poseidon now have an exchange that gets perhaps the biggest laugh of the show. But even if you’ve seen the musical, it’s worth seeing it again. There are so many clever references hidden in the show! Rob Rokicki is a master of incorporating reprises into his score; we’re still catching awesome obscure callbacks in the songs after listening to them for years.

The musical tells a satisfying, complete story — it will provide audiences with a good laugh, often a good cry, and will leave its young audiences feeling empowered for when the world brings on the monsters. What more could you ask of a Broadway musical?

For tickets and more information, visit The Lightning Thief‘s website.