The cast and crew of The Mandalorian may be more excited for its November 12 premiere on Disney+ than anyone else in the galaxy.

The Mandalorian is telling a brand new story on a brand new platform, but showrunner Jon Favreau and director/producer Dave Filoni are hoping to sweep fans up into the classic era of Star Wars and transport us back to the beginning.

And so we really efforted not to make it a reflection of what we interpreted Star Wars to be but instead to go back to the source code… and look at the films that influenced George.”

Those influences are clear in what we’ve seen of The Mandalorian so far. Favreau and Filoni have gone back to the films of Akira Kurosawa, John Ford, Sergio Leone, and others. The Mandalorian feels very much like a western but will also tip a nod to Lucas’ love for serialized storytelling.

“I wouldn’t be doing this without him,” said Favreau. “We both love to learn. And so, when he tells me something I’m never like, you know, resisting and I’m always digging deeper to understand more. And then when I tell him something. It’s the same type of thing. So, although we had the back and forth… It’s always very enthusiastic and never out of frustration… it’s purely collaboration and excitement.”

There’s something about watching both men interact and listening to what they have to say that makes me wish I could just be a fly on the wall for all of their conversations. They’re just so damn excited to be doing this and more so to be doing it together.

That’s not to say that they are the only ones super excited just to be involved with The Mandalorian.

Pedro Pascal is like a kid in a candy store.

“If you grow up, you know, playing the Star Wars toys…you’re staring at yourself and, and you are the image of that kind of childhood imagination. It’s a super ‘pinch me’ moment.”

He made sure we all got that “super pinch me moment” quote into our stories. It was frickin’ adorable. His eyes light up when he talks about this role and the process of making The Mandalorian. It’s not to say that it’s not hard work. He says the suit can be a challenge to wear and he’s gotten his fair share of bruises, but I get the feeling he takes that thing off every day and he’s smiling from ear to ear.

That same excitement is palpable from both Gina Carano who plays Cara Dune and Carl Weathers who plays Greef Carga.

For Gina Carano, the experience has been really welcoming and she spoke several times about how kind fans have been and how excited she is to be a part of this universe. When she started all of this, she didn’t know much about Star Wars, but working on the show has given her a chance to dive deeper into the story and what it means for fans all over the world.

One of the biggest highlights for her, she says, is her costume — which she shared got some help from actor/director Bryce Dallas Howard.

“To take a curvier woman and put her in something that’s almost like a football uniform…you can lose your femininity real quick… lose your body… and, you know, of course, you want to love what you’re wearing right? 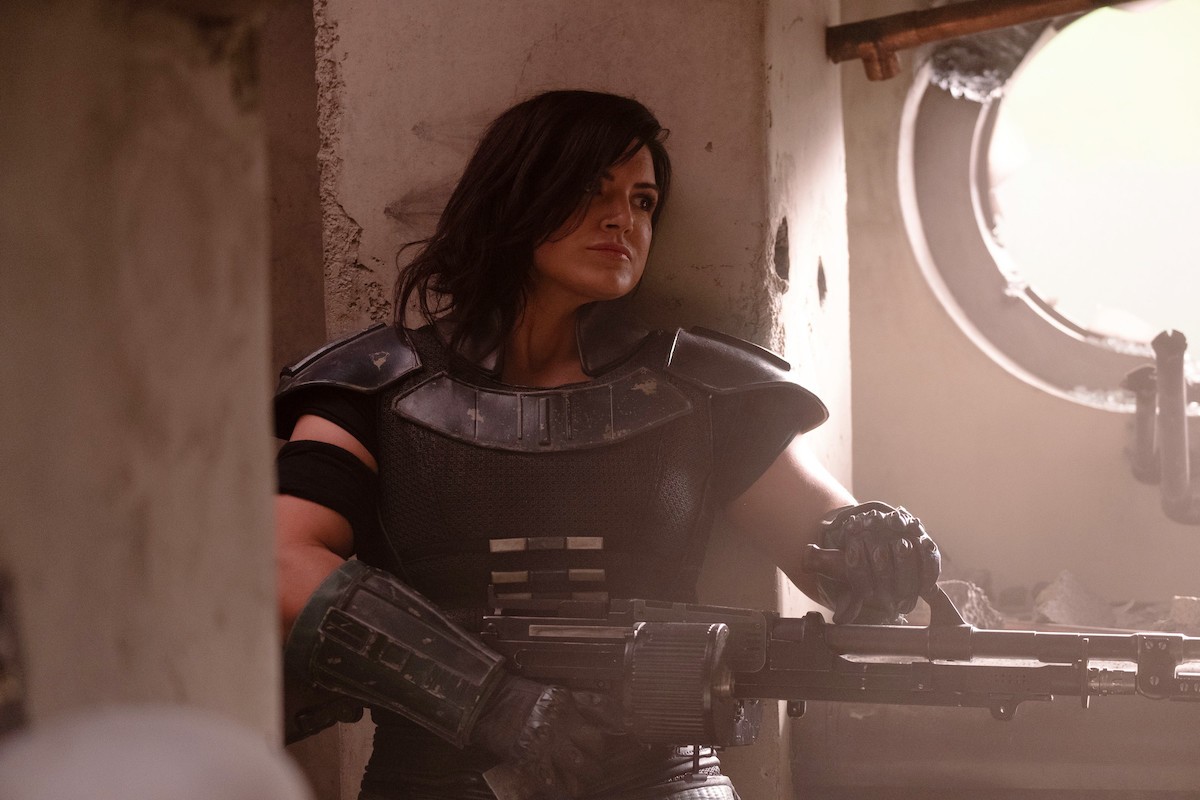 So from the beginning, she was like ‘No no no… this is what we’re going to do with the outfit. This will help this area….’ and so what could have been originally a box frame ended up being this great…hourglass shape.

That meant a lot to me because, of course, I want to be a Mack truck and be able to mow everybody over like I do that naturally but I also want to you know be who I am, and I want to bring that to her character as well and show a strong woman. So that was really key from the beginning, creating her costume and then putting it on every day, but I enjoyed wearing it. I enjoy putting on that costume so much, I can’t get enough of it.”

“Jon promised last year when I agreed to do this…and I gotta tell you, I’ve been around enough to know that people don’t always keep their words, you know,…so, being a part of this so again… this is one of the greatest things that’s happened in all the years I’ve been involved in entertainment.”

Speaking of directors, The Mandalorian has a wide variety of people hopping behind the camera; Taika Waititi, Deborah Chow, Bryce Dallas Howard, Rick Famuyiwa, and Dave Filoni all direct episodes in season 1.

Personally, I have to admit that Dave Filoni directing is my favorite news out of this entire list. Filoni directed the first and fifth episodes of the series (Episode 5 will feature the first appearance of Ming Na Wen’s Fennec Shand) and it’s the first time he’s making the jump from animation to live-action.

“I love having this experience and knowing there are advantages and disadvantages to each one… There’s something about the concrete nature of live-action that is incredibly spontaneous it’s going to happen right at the moment. And then that’s it… where [in animation] I can tweak a tiny eyebrow or a tiny smirk or give us a little bit of a push in a direction that will dramatically change the character.

You have to get all these variables to kind of come together and be aware of it. And it’s not like you’re controlling any of it as much as you’re guiding it…but capturing that moment right in front of you is, I think, the real magic of it all and something that I’ve been craving to try.”

Given what we’ve seen so far, I have a feeling Dave Filoni kinda nailed it.

What’s clear both from the interviews and press conference I attended is that everyone involved with The Mandalorian is really excited to be working on the first ever live-action Star Wars series and hopes fans will be just as excited to watch when it premieres on Disney+ November 12.

This fan sure is.