The Mandalorian season 1, episode 5 follows the established pattern of simple stories played out to their mostly anticipated endings. But for the first time since the premiere, The Mandalorian is reaching a little bit.

In “The Gunslinger,” our Mandalorian lands on the cradle of Star Wars storytelling, the Skywalker home planet of Tatooine. The significance of the place is understandably lost on him — he has more important things to worry about.

Strapped for cash after the Razorcrest sustains serious damage from a bounty hunter, the Mandalorian accepts a partnership with a hopeful guild member named Toro. Sopping wet behind the ears and having bitten off far more than he can chew, Toro brings the Mandalorian on board for his attempt to bring in the legendary assassin, Fennec Shand. (More about her later.)

It’s instantly obvious to both the audience and the Mandalorian that Toro is, in layman’s terms, a total idiot. Lounging in a booth at the Catina like a watered-down Han Solo, swaggering so hard he’s bound to pull a muscle, Toro has about as much depth as the mechanic Peli’s pit droids — and considerably less charm.

The problem with The Mandalorian season 1, episode 5 is that our Mandalorian — and most other characters in the story — aren’t acting smart enough to counter the cowardly moron.

First of all, he literally leaves Baby Yoda locked on the Razorcrest, which demonstrates such ridiculously poor judgement that I can’t afford to think about it. What’s more, the Mandalorian — he of the gruff, mistrustful distance — trusts Toro. 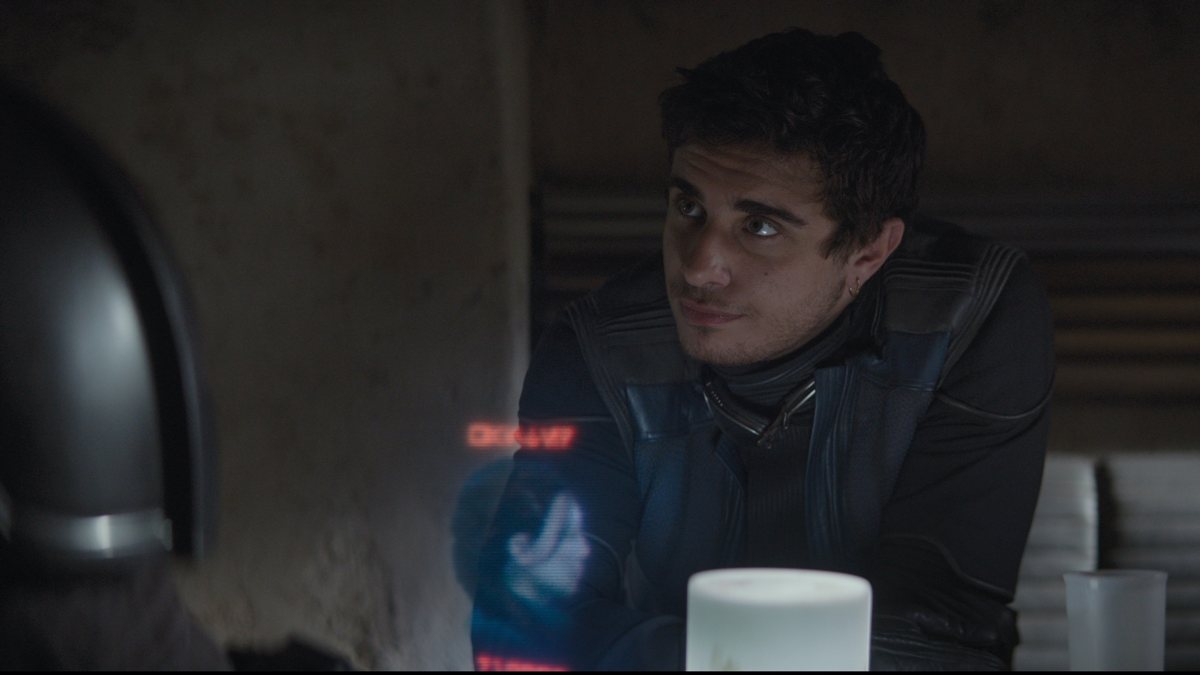 Yeah, yeah, it’s a Mandalorian kind of trust; if asked, our hero would probably never cop to it. But though he distrusts the negligible pit droids and regards Peli with serious suspicion, the Mandalorian gets on board with Toro’s merry chase faster than you can say “Reconsider!” He takes the lead on the hunt, shouldering most of the work; he actually trusts this idiot kid enough to take the watch while he rests.

Most damning of all, he leaves Toro alone to keep watch over Fennec Shand. Even if Toro had exhibited a modicum of competence previously, this would be a ludicrously guileless choice. The ever-suspicious Mandalorian never suspects the damage that Shand is able to wreak with her words even without the benefit of her actions, or what Toro is actually looking to gain from this situation.

Speaking of Fennec Shand, it’s disappointing to see her character come so quickly to such an apparently ignominious end. While Ming-Na Wen brings plenty of appreciated relish to the role, Shand also isn’t allowed to be very smart.

She apparently knows quite a lot about the Mandalorian, but fails to predict that he might have any tricks up his sleeve to combat her sharpshooting. She is apprehended with lackluster ease. And while her gambit with Toro is a bit more believable from her perspective, it’s conclusion suggests that it is a somewhat naive approach from a woman of such brilliantly ruthless reputation.

Shand is cool in broad, generic strokes, her allegedly genius skill subverted by the needs of the plot and her negligible screentime. I’ll be happy to reconsider if the character somehow returns to The Mandalorian’s field of play, but for now, Fennec Shand plays as a rather disappointing cameo.

But while Shand at least is missing enough information to make her appeal to Toro believable, the Mandalorian has no such excuse for his trust. He fundamentally misjudges the would-be bounty hunter, perhaps assuming that, despite Toro’s eagerness to join the bounty hunter’s guild, the kid doesn’t have what it takes to hack it. Or perhaps Toro’s disinterest in the payment makes the Mandalorian disregard any threat he might pose.

Either way, the Mandalorian is dangerously wrong and bizarrely misses Toro’s most fundamental trait.

Toro isn’t actually incompetant — he’s just lazy. He demonstrates this early on, crushing Shand’s tracker so that he must be brought along on the mission without having to do much of the work. But once Shand raises the incentive to a level that truly interests him, Toro has no problem acting with the cowardly ruthlessness that the Mandalorian should have spotted a mile away. He kills an unarmed and shackled prisoner, takes Peli and the child hostage, and then has the chutzpah to monologue at the Mandalorian just because he’s the one holding the blaster.

Peli tells the Mandalorian that he’s smarter than he looks, but after this episode, I’m not sure I agree. 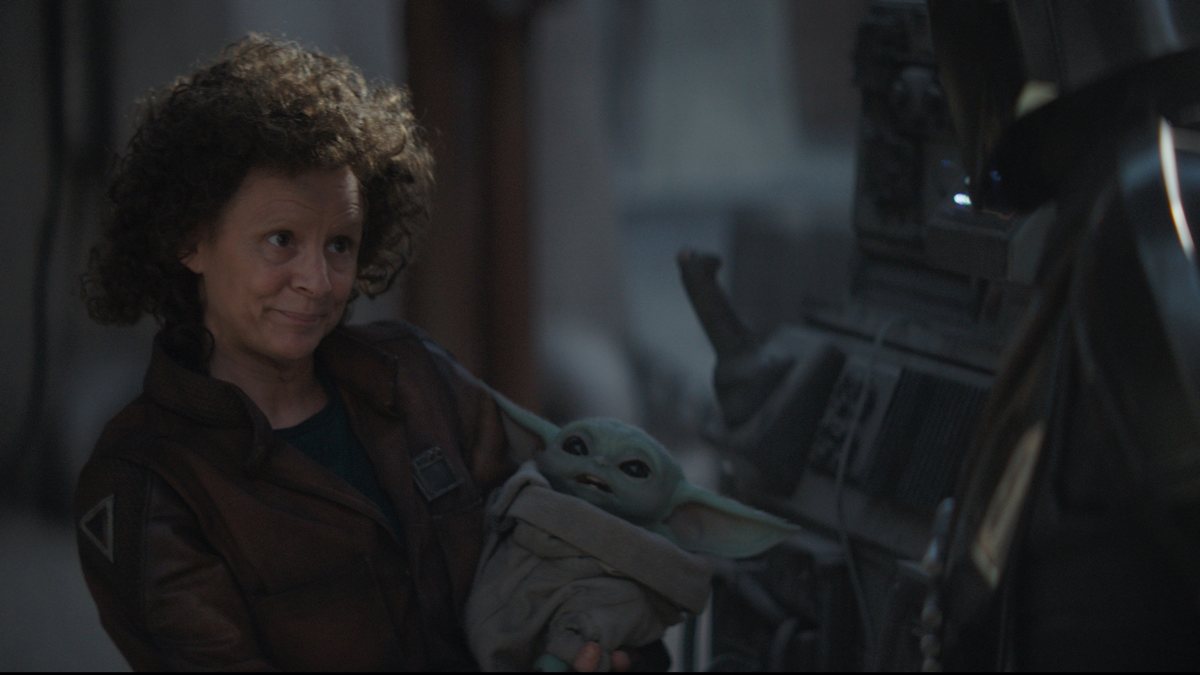 The Mandalorian season 1, episode 5 also strains to connect to the broader overall story. Last week’s episode acted as a respite from the action immediately prior, but also served to provide perspective and change the Mandalorian’s objective; aside from the mysterious figure (even odds between ex-Imperial Moff Gideon and good ol’ Boba Fett) surveying Shand’s body at the end of the episode, “The Gunslinger” seems to use its Tatooine setting to mostly replace contributions to the arc.

Certainly, it’s pretty darn cool to see Tattooine again, with no Skywalkers in sight. As it did with the Jawas, The Mandalorian economically lends depth to the planet’s familiar setpieces. The once-monstrous Tuskan Raiders are now posed as indigenous people seeking scraps of control and dignity in their stolen land. And even the Mos Eisley Cantina seems to have been gentrified by the droids who have taken over from the anti-droid bartender of A New Hope.

But this isn’t quite enough to crest the hill between “it’s just Star Wars” and the compelling, elemental storytelling that has characterized the previous episodes.

The Mandalorian season 1, episode 5 also suffers from a truly criminal lack of Baby Yoda content. The kid stays behind with Amy Sedaris’s Peli, his main sparkling moment a heartbreakingly confuses shuffle down the Razorcrest’s gangplank. In fairness, keeping Baby Yoda out of the action is one of the Mandalorian’s cannier moves in the episode, but I need my weekly fix of smol, green, and adorable, and his approach in “The Gunslinger” of keeping the kid out of harm is almost laughably inept.

YOU CAN’T LEAVE A BABY ALONE ON A SPACESHIP, YOU– okay. Breathe. It’s okay.

As always, The Mandalorian season 1, episode 5 is visually stunning, and in a longer season the episode might not stand out as sharply as it does. But with only three episodes left to go, I’m going to raise a glass of spotchka to the hope that The Mandalorian returns to its groove as quickly as possible.

The Mandalorian season 1, episode 6 streams on Disney+ on Friday, Dec. 13.