Watchmen season 1, episode 3, “She was Killed by Space Junk” shifts the focus away from Angela Abar and puts FBI Agent Laurie Blake front and center.

The first two episodes of this season of Watchmen introduced us to a brand new world and alternate timeline, but it did so in a very limited way by keeping the focus tight on Tulsa, Oklahoma. We began the story there in 1921 with the Tulsa Race Massacre and — for the most part — Watchmen has kept the story focus trained tightly on that same small city even as we jumped nearly a hundred years later.

(Notice I say for the most part as Jeremy Irons’ Lord of the Manor storyline takes place in God knows where, but certainly not in Tulsa, Oklahoma.)

The focus has been on the local police force and a local murder, so much so that while we’ve learned quite a bit about the local Tulsa PD and Tulsa’s inhabitants, the world at large still remains a rather fuzzy outline to us.

That changes a bit this week, however, as Watchmen pulls the focus back and switches perspectives from Angela Abar, local Tulsa detective, to Laurie Blake, federal agent for the anti-vigilante task force.

In doing so, Watchmen immerses us deeper into the broader world of the story and provides the most concrete connection between the Watchmen comic and this 2019 sequel-that’s-not-really-sequel-but-actually-is TV show.

‘Watchmen’ season 1, episode 3, ‘She was Killed by Space Junk’ review 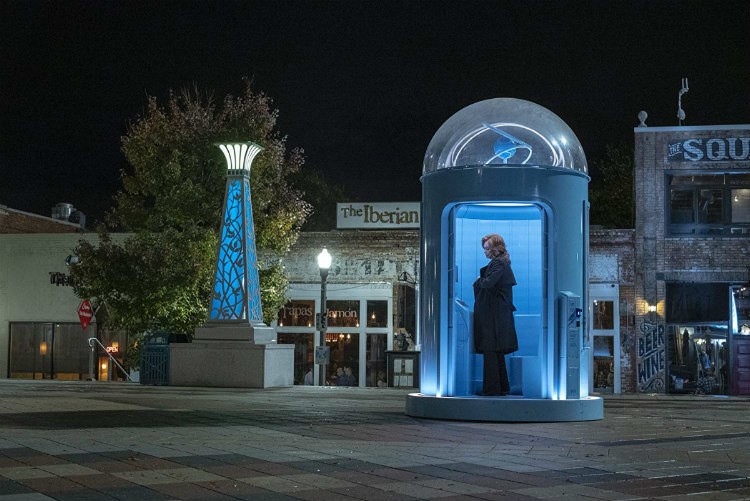 One of the observations (and sometimes criticism) I’ve heard about the first two episodes of Watchmen is that if it weren’t called Watchmen, then there really isn’t all that much tying it to the twelve issues of Alan Moore and Dave Gibbons’ 12 issue run of the same name.

Sure, squids fall from the sky as a nice shout out to the giant squid turning up in New York City in the 80s, and the Seventh Kalvary wears Rorschach masks, but you might easily sub in some other animal falling from the sky, some other mask on the KKK 2.0, and the story would still make sense.

Lindelof himself has likewise taken pains to say that Watchmen is perfectly intelligible without having read the original series, and with what we’ve been shown in the first two episodes, I’d say that rings rather true.

However, the show takes a shift in this third episode, giving us not only the most direct references to the Minutemen and what happened in the original run of the comics, but giving us two characters who were active participants in that story and making a direct reference to two others.

Introducing Laurie Blake (née Juspeczyk) into this third episode of Watchmen is a great move for a variety of reasons. First of all, Jean Smart is utterly fantastic as Laurie, bringing just the right amount of hard-edged cynicism and surprising vulnerability to a complicated role. Secondly, I loved seeing her dynamic with the equally tough, equally vulnerable Angela Abar as played by Regina King. We don’t see too much of them together in this episode, but the scenes that we do have are some of my favorites of the season.

Finally, including Laurie into the story line makes Watchmen not only a spiritual successor of the original comics, but an actual descendant in terms of plot and character. Those wondering why the show even needed to be called Watchmen will have less fodder for that argument after this episode — and fewer and fewer as the season wears on.

And while I’d agree with Lindelof’s assessment that the first two episodes don’t require knowledge of the Watchmen comics, I do think that a lot of this episode would be rather confusing — if not outright unintelligible — without at least some baseline knowledge of Dr. Manhattan, Ozymandias, Silk Spectre and their exploits in the 80s when the Doomsday Clock was dangerously close to midnight. 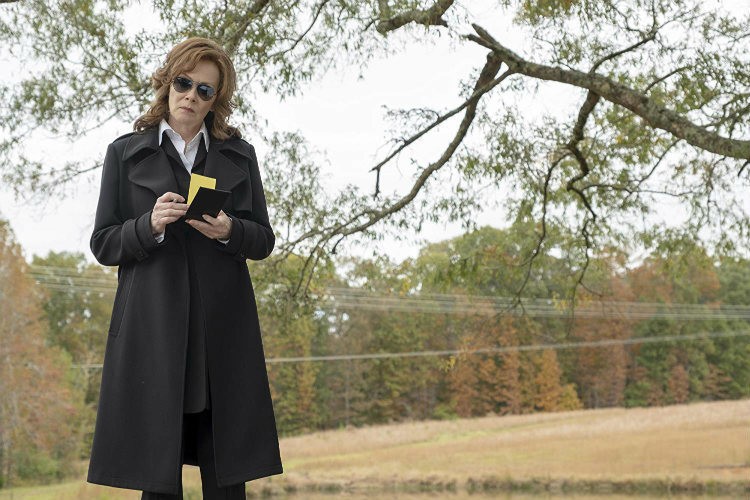 In addition to bringing another badass woman to the show, Laurie Blake also allows Watchmen to pull back the focus a bit and introduce us to the world at large.

So far, the world as we know it has been confined to the 200 square miles of Tulsa, with the main story keeping its focus there as well. This week, we get to see Tulsa and its inhabitants from an outsider’s perspective.

Aspects of Watchmen that we’ve initially just been handed as status quo, are now seen from a different, less accepting perspective, as Laurie navigates a world with a masked police force and an interrogation pod filled with subliminal imagery, with all the deep cynicism you might expect from a world weary former vigilante.

From her perspective, the masked cops are as strange and dangerous as the vigilantes she works to take down, and the racism detector — as she so delightfully calls it — borders on the absurd.

The first two episodes of Watchmem had a near, myopic focus on Tulsa, which allowed us to take its strangeness for granted, but Laurie Blake brings with her the ability to see it — well, perhaps not as it truly is, whatever that might mean — but in such a way that allows us to be more open to questioning it.

The same goes for its inhabitants, as Laurie goes about investigating the murder of Judd Crawford without any of the emotional hangups the rest of the Tulsa PD — including Angela — have with them. She investigates his murder without the assumption that the Seventh Kalvary was involved, and in doing so, uncovers the same skeleton that Angela did in the previous episode.

However, as she’s divorced from any emotional connection to the man — and even if the closet was bare — I’m nearly certain she either knows what was hanging on that bust or wouldn’t be surprised in the same way Angela was in the previous episode. Laurie Blake comes from the original Watchmen story, which means she is someone who is intimately aware of the fact that the glistening exterior of the best heroes often hides the ugliest, most evil of hearts.

As she says in the joke to Dr. Manhattan, all heroes and all gods — no matter what good they might’ve done — go to hell. 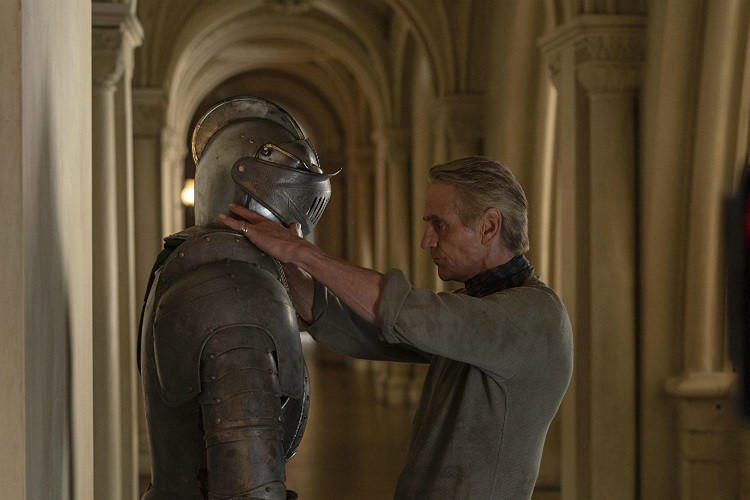 I gave a big sigh of relief when I finished re-watching this episode of Watchmen because it meant I could finally stop dancing around the fact that Jeremy Irons’ Lord of the Manor, as the official synopses have taken to calling him, was in fact Adrian Veidt.

If it wasn’t enough for him to sign his name as such in the letter to the Warden, this episode of Watchmen likewise has Jeremy Irons dress up in the Ozymandias costume to really let us know for sure that yes, Jeremy Irons is in fact Ozymandias.

What it doesn’t let us know is what the hell he’s up to. Here, too, this third episode represents another turn in its storytelling. Initially, it seemed like Adrian was just fiddling around in his retirement, amusing himself with tormenting his clone — or whatever they are — army of servants by having them put on plays and cook him food.

In this episode of Watchmen, we learn that Adrian — for perhaps the first time ever — is not in control of his own life and isn’t 15 steps in front of everyone else. Instead, he’s in captivity of sorts, one that he seems to have initially agreed to on some terms, but is now chafing up against.

Rather than choosing to live within a castle that seems to have been created in the 12th century, it seems he’s trapped there.

However, just because Adrian is not in control does not mean he isn’t still the smartest man on Earth — or outside of it, if that’s where he’s at. We watch as he uses materials around him — a glass case, a suit of armor, the fabric found in his sprawling estate — to construct some kind of suit for Mr. Philips.

What kind of a suit? Initially, I thought it could either be a space suit or a scuba suit, given that it was completely enclosed and needed oxygen. However, when we catch up with poor Mr. Philips again, the man (or clone or robot or WHATEVER) has frozen completely solid, which seems to point to deep space.

Which means Adrian is likely being held somewhere far from Earth. Held against his will, in a castle where no modern technology exists, accompanied by an army of clones and being held by a mysterious warden with whom he’s entered into some kind of agreement.

So there’s a lot that we don’t know.

But what do know is this: Adrian Veidt is the smartest man alive, he’s trapped, and he’s looking for a way out.

Which means that it’s only a matter of time until he finds it. 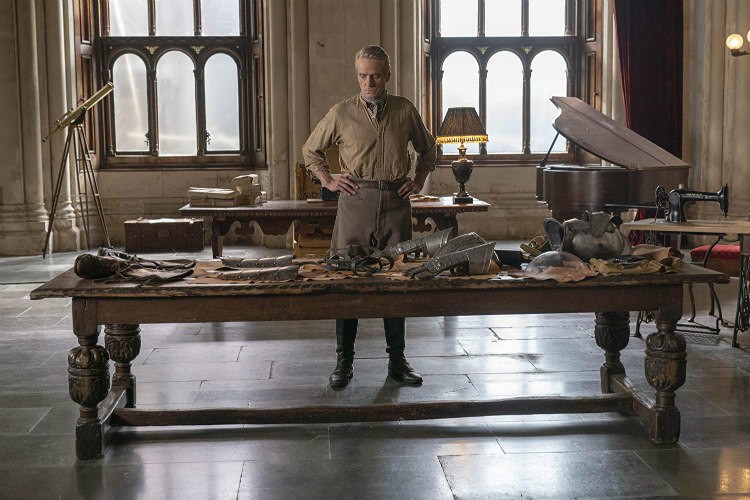 What did you think of ‘Watchmen’ season 1, episode 3, ‘She was Killed by Space Junk’?