Watchmen season 1, episode 5, “Little Fear of Lightning,” is a Looking Glass-centric episode that posits the question: Is anything true?

The first two episodes of Watchmen focused on Regina King’s Angela Abar — aka Sister Night — and introduced us to Tulsa, Oklahoma in an alternate 2019.

The next episode pulled back and shifted the focus to Jean Smart’s Laurie Blake — the erstwhile Silk Spectre of The Minutemen — while also introducing us to the world outside of Tulsa, Oklahoma.

The fourth episode mostly belonged to Hong Chau’s Lady Trieu, the spiritual and literal successor to Adrian Veidt’s role in the story and empire. That episode served to shed light on the ‘vast and insidious’ conspiracy hinted at by Will Reeves in the second episode, letting us know that this Watchmen series is building to a major event just as the original comics did.

This fifth episode of Watchmen is wholly dedicated (with the exception to our brief dip into the plight of Adrian Veidt) to Tim Blake Nelson’s Wade Tillman — aka Looking Glass — and delving deep into the intersection between white supremacy and systems of power.

Watchmen has been slowly addressing this over the course of the season, with this episode being the one that most clearly exposes the sick, torrid, white supremacist heart at the very center of the police, politics, and systems of power. 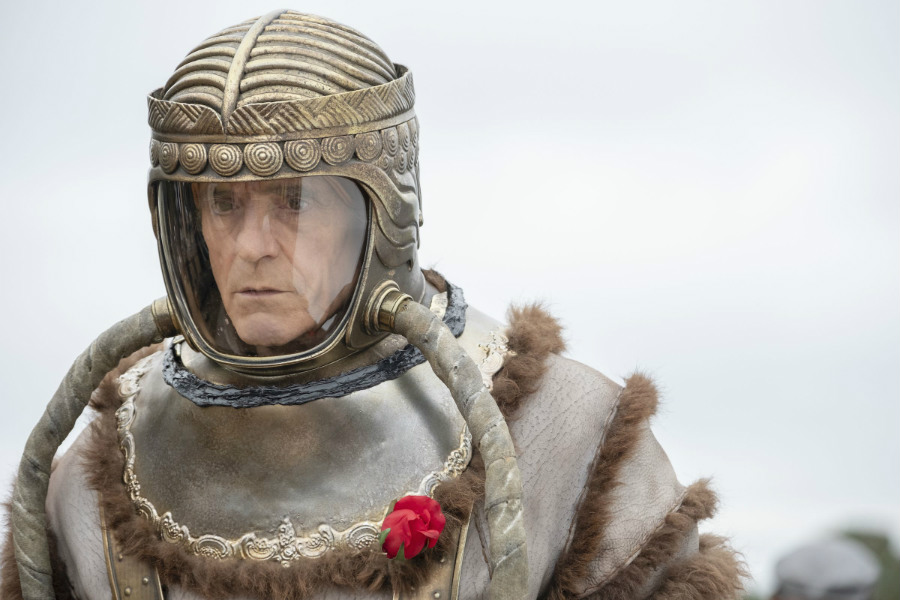 I usually end these reviews talking about Adrian Veidt’s plight, but the true ending of this episode requires so much unpacking that I’d rather begin with the side story of Adrian this time around.

Five episodes in, and the show finally confirms that Adrian is indeed stranded somewhere in space, looking for a way back home. I’ve found the Adrian Veidt parts of this story to be absolutely fascinating, even if I never really know where it is going, what is actually going on or why it’s even included.

I can’t even say that it’s my trust in Lindelof that made each little bit of story we got about Adrian fascinating — after all, I’m not really a fan of LOST, despite watching the entire show.

It’s more that this show in particular is so confident in itself and so good at both telling an episodic story and spooling out a season-long arc that I’m willing to be patient with a storyline which seems to have nothing to do at all with the main narrative.

And while this episode of Watchmen gives us just as many questions as it does answers, the journey we’ve been on so far has been so fascinating and batshit crazy that I’m eager to see where it will go.

I’ve mentioned in my last two reviews that while we don’t know who imprisoned Adrian and how they managed to do it, we can be almost certain that he’ll find a way out of his exile/imprisonment.

He gets the closest we’ve seen this week, managing to launch himself into outer space and using the horrific frozen bodies of hundreds of Mr. Philips and Ms. Crookshanks to spell out “Save Me” for a passing satellite to take a picture of.

At least, “save me” is all the camera allows us to see, but if you manage to pause the episode just right, you’ll also see that there’s another word following it — one that begins with D — perhaps for Dr. Manhattan?

We can’t know for sure because before we can see take too long a look at his macabre message, Veidt is yanked back into his prison, where he comes face to face with the Game Warden.

Veidt froths and foams at the Game Warden, saying that their God has abandoned them — to which the Game Warden calmly agrees before knocking Veidt out.

So now we know Veidt is imprisoned, he’s somewhere deep in space and he’s managed to get a message out to a passing satellite. We also know that this isn’t all going on at the same time as our main storyline, but has, in fact, been happening for at least four years.

How will this story link back up with the main storyline, and what was the purpose of it all really? I honestly have no idea, but when a show is as good as Watchmen has been, I am looking forward to the ride. 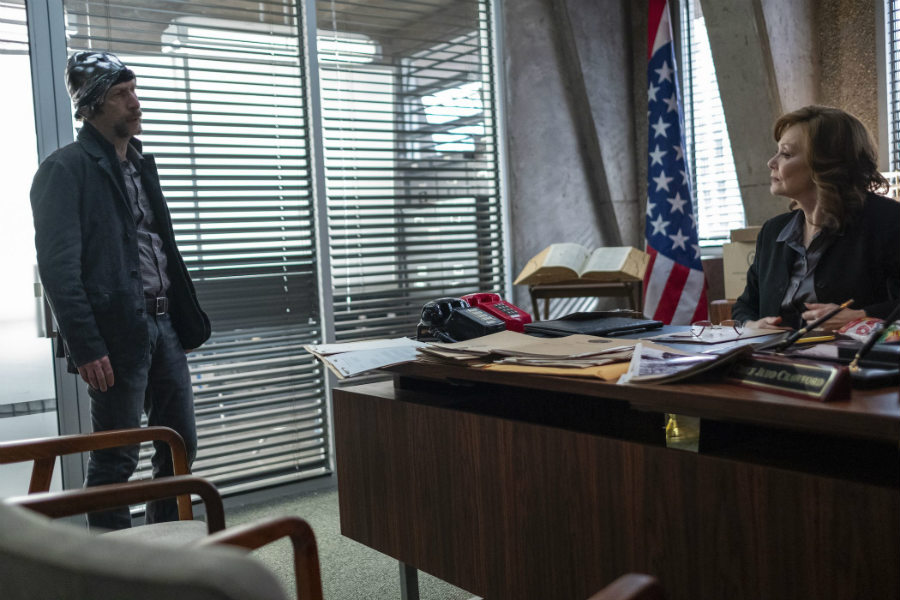 The great majority of this episode is dedicated to Tim Blake Nelson’s Looking Glass, which means it’s an episode that’s all about trauma and truth.

Trauma because Wade Tillman’s life is defined by it; truth because Looking Glass’ entire identity is dismantled by it.

We’ve seen how the echoes of Adrian’s giant squid in New York City have impacted the world at large, but this episode does a fantastic job at framing just how devastating that cataclysmic event was for individual people.

We’ve seen enough of Wade Tillman’s Looking Glass to know that he’s one weird dude, but this episode provides the backstory for us to see how much of his strangeness has been shaped by his deep, life-altering trauma.

Last week’s episode had a scene in which Laurie told Angela that, “people who wear masks are driven by trauma. They’re obsessed with justice because of some injustice they suffered, usually when they were kids.”

And though we don’t quite yet know what Angela’s childhood trauma might have been, this episode gives us a long glimpse at Wade’s and it is absolutely devastating.

Wade was right in the middle of New Jersey the night of 11/2, saved from a horrific death because he was in a funhouse mirror nightmare maze. Those mirrors saved him, and have turned into both a way to keep the trauma at bay and a reminder that he has never really healed from it.

The Wade of the present — despite telling Laurie Blake that he sleeps great — is still haunted by those events and has patterned his entire life out of his fear from it.

It’s nothing particularly surprising — Tim Blake Nelson is basically god level in acting in every role that he’s been in — but he brings his top level talent to bear in a truly captivating performance here as Wade Tillman. Tillman is a traumatized, broken man desperately trying to hold it together and move forward, but unable to because of his deep trauma.

Perhaps the saddest, most pitiable scene in the whole episode is when Wade Tillman takes off the mask, comes home and…puts another mask right back on. There is no safety for Wade, there is no sense of home, there is no happily ever after.

And unlike what we’ve been told our whole lives, the truth does not set Wade Tillman free. Instead, it burdens him even further. His trauma, his shattered life, his entire identity has been shown to be a lie, and there is absolutely no way to make sense of it all.

The Wade Tillman who learns the truth about what happened on 11/2 is just as broken as the one who was traumatized by the arrival of a giant, psychic squid, and that’s perhaps the saddest ending of all. 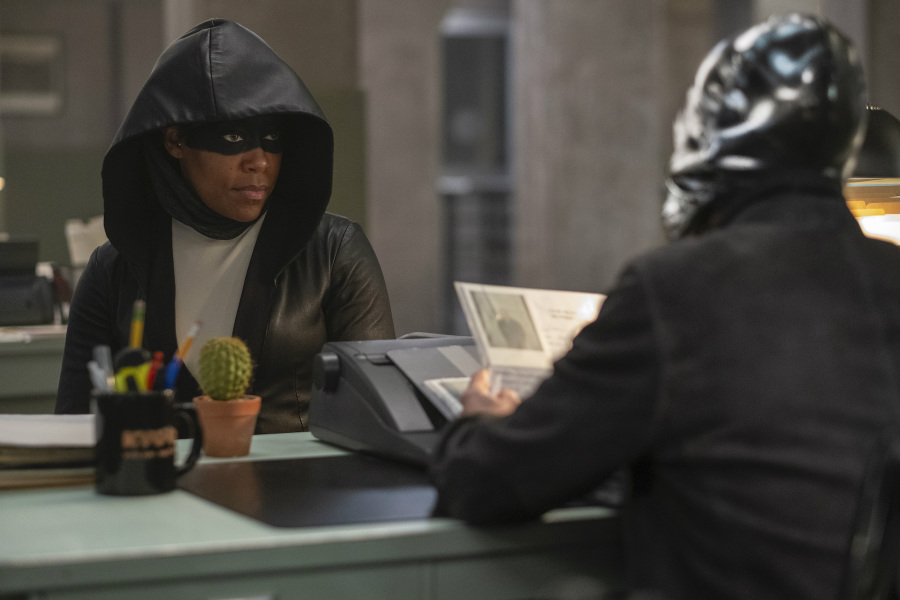 There are quite a few revelations in this episode — not only to Wade Tillman but to us as the audience. Looking Glass learns the truth behind the giant squid and source of all his trauma, and the viewers learn that Senator Joe Keene Jr. and his buddy Judd Crawford were, and are, members of the Seventh Kalvary.

Now, it wasn’t a surprise to me that Senator Joe Keene Jr. is a racist leader of the Seventh Kalvary (I have not trusted that man from the beginning), nor was I particularly shocked when it was revealed that Judd Crawford had a Klan robe hanging in the back of his closet.

As Wade said in the last episode — these are white men from Oklahoma.

And call me naive or perhaps just cautiously optimistic, but because he was so willing to admit that, I didn’t believe that Wade would be a racist the same way that Judd or Joe were revealed to be.

Or maybe I didn’t want to believe.

However, even though Wade isn’t as overtly racist as those two gentlemen, Watchmen is a smart enough show to recognize that racism isn’t just in people; it’s in structures.

Meaning, that even a well-meaning individual like Wade who desperately wants to avoid being or doing racist things, still winds up bending to the racist power structures that control so much around him.

Yes, we can argue that he didn’t want to take Sister Night ‘off the board’ as Senator Keene stated, that he was just doing so to save her life, but there’s also some other universe out there where he really meant it when he said he wanted to help, and that instead of cowing to the Seventh Kalvary, he instead worked with Angela in direct opposition to them.

But that’s not what happened here. Instead, Wade Tillman bent to the will of the Seventh Kalvary and white supremacy.

The truth that is revealed here isn’t just that the giant squid was a hoax, but that good people who want to do the right thing can be, and often are, complicit to the furtherance of a racist power structure and a racist agenda. 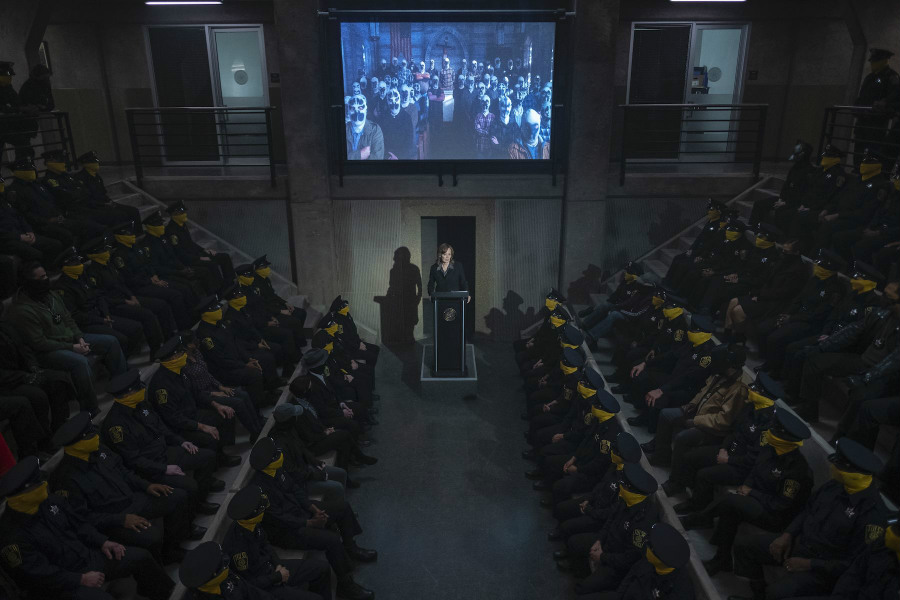 What did you think of ‘Watchmen’ season 1, episode 5 ‘Little Fear of Lightning’?