Watchmen season 1, episode 7 takes a deep dive into Angela’s memories and sends us barreling towards the the season’s conclusion.

I use barreling here deliberately, because I feel like the slow, methodical pace of the last six episodes was abandoned here — as if the writers suddenly realized that all the threads they meticulously laid out the last six episodes needed to woven together and resolved in a mere three episodes.

Which means that we get a lot more ‘telling not showing’ in this episode — especially with Laurie Blake’s storyline (aka the main storyline) this episode, wherein she basically pulls together the mystery of Judd’s death and the connection between Joe Keene Jr., the Seventh Kalvary and Cyclops, wraps it up with a nice, tidy bow, and presents it to us.

The rest of the Seventh Kalvary’s dastardly plan is told to us by Joe Keene Jr. himself in true supervillain fashion. In fact, it’s all so straight forward and unambiguous that I have to think unraveling it all this far from the final episode means that this supervillain plan is a red herring, and the true reveal is yet to come.

I hope, at least.

I do want to say that this abrupt change in pace didn’t make it a bad episode of television — my feeling is that even the worst of Watchmen is better than most television you’ll put on — but I will say that I rank this episode substantially lower than the rest of the season thus far.

Part of that is what I felt like was less subtle writing and choppier pacing, but also — it’s just hard to be the episode that follows “This Extraordinary Being,” which is about as perfect an hour of television as you’re going to get. There was going to be letdown no matter what.

Still, I enjoyed this episode quite a bit, especially getting a chance to dip into Angela’s past (finally!), so let’s start there. 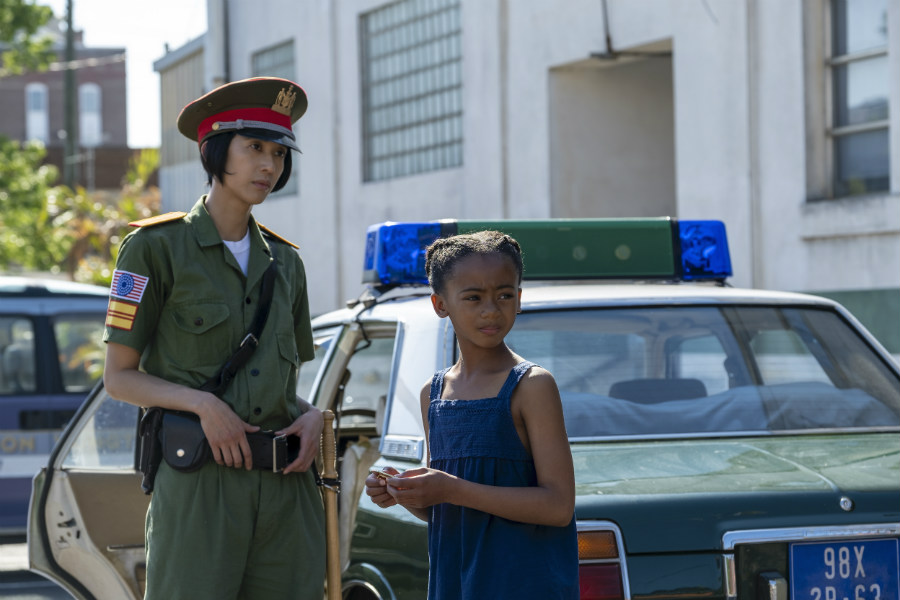 In episode 4 of this season, Laurie Blake asked Angela why she dressed up as a nun, then wondering out loud about what kind of trauma associated with a nun might’ve led her to that costumed outfit.

“People who wear masks are driven by trauma,” she said, succinctly summing up the motivation and arc for just about every superhero. “They’re obsessed with justice because of some injustice they suffered, usually when they were kids.”

In this episode — thanks to the ongoing residual effects of Nostalgia — we get to find out just what kind of trauma Angela suffered as young child. Turns out Sister Night was a Blaxploitation film that she spent many a night trying to convince her parents to let her watch, and happened to be the video that she was holding in her hand when her parents were killed by a Vietnamese suicide bomber who was angry about American occupation. That character then became her own costume against injustice.

In the last episode, there were some pretty overt Will Reeves and Superman comparisons — just like Kal-El, Will Reeves is stored away in a box and taken far from the home that is burning down all around his parents. He escapes due to their sacrifice, and grows up to be the manifestation of justice and a symbol for truth.

Does that then make Angela Abar, his granddaughter, analogous to Batman? She watches her parents get killed right in front of her, and uses the symbolism in her hand that day and the pain of their death to become a costumed hero seeking justice — often with her own two fists, as we’ve seen.

I could’ve used an entire episode of delving into Angela’s past as a child and on through to adulthood (although we do get more of her adulthood in the next episode), similar to what we got for Will Reeves, but I also understand why the show flip flopped between past and present this week.

Last week was about tying all the disparate threads together, whereas this week is about moving all those threads forward to their conclusion. Plus, in terms of characters, this week’s flashbacks allowed us deeper insight into not only Angela Abar’s character and development, but also into the ways in which Dr. Manhattan’s existence influenced our current heroes. 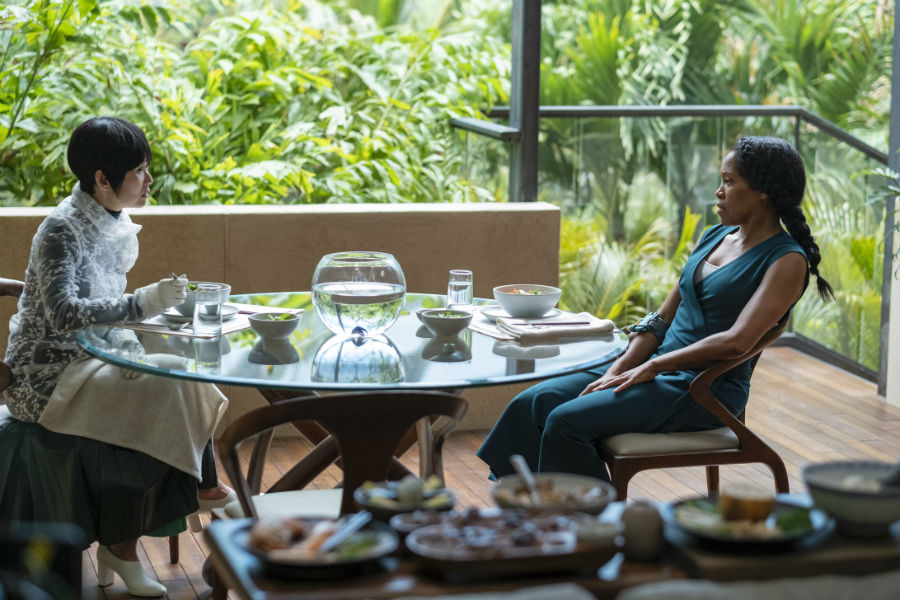 So, did you see that revelation coming?

I must confess, dear reader, that I absolutely did not. I really thought this god-like being was on fucking Mars.

But turns out he’s been on our screens this whole time, being a devoted father and husband to Angela Abar, who has been helping him cover these last ten years.

But let’s back up a moment.

We flip flop between the past and present day in this episode, the past taking us deep into the history and trauma of Angela Abar and the present pushing our main plotlines forward. Since the narrative involving the Seventh Kalvary is fairly straightforward and likely to be some kind of red herring overall, I’m going to focus on Lady Trieu, her Millennium Clock and that revelation about Cal Abar.

Memory, time and trauma have all been an ongoing motifs throughout this season of Watchmen, and they all come together with Lady Trieu and her Millennium Clock. Lady Trieu’s company is the one responsible for Nostalgia, a pill that — as she tells it — was initially created so that people could move past their traumas, but instead remained mired in them. But she plans to undo this worst mistake of hers with the Millennium Clock, which she tells the world at large will allow them to move forward into the future, and tells Angela in private will be the key to saving humanity.

(As an aside, I find it interesting that Lady Trieu criticizes people for remaining tied to their memories, but she’s also the one who cloned her own mother so that she could be there when she saves the world.)

We don’t quite learn how the Millennium Clock will save humanity, but we do, however, learn in this episode why humanity will need to be saved.

It turns out that the Seventh Kalvary (née Cyclops, née the KKK) is planning on capturing and killing Dr. Manhattan and then having Joe Keene Jr., racist at large (and probably a Men’s Rights Activist, if we’re being honest here), become a Dr. Manhattan-type being — which means all the power of the gods would be in the palm of the hands of someone who says — with a straight face — it’s hard to be a white man right now.

But how exactly will the Millennium Clock save humanity? Given all that Watchmen has done and said regarding memory and trauma, and the way in which it has played with time this season — not to mention the fact that Dr. Manhattan himself is able to live in all of time at once — I have to wonder if the Millennium Clock isn’t going to have something to do with time travel.

But how would that keep Dr. Manhattan out of the Seventh Kalvary’s hands? And what could that clock do that Dr. Manhattan, now fully awakened and aware of his powers, couldn’t do himself?

We have two more episodes to find out. 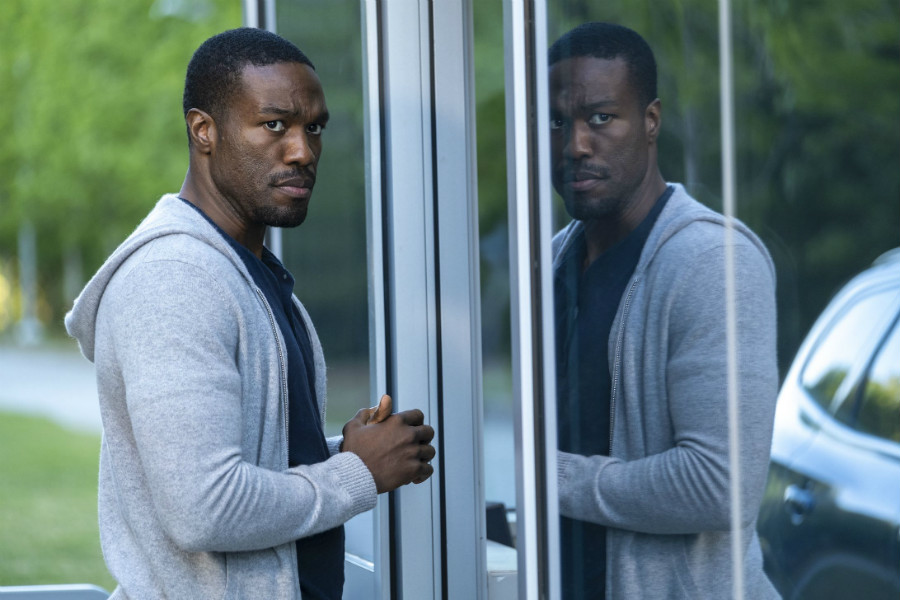 What did you think of ‘Watchmen’ season 1, episode 7 ‘An Almost Religious Awe’?